Does anyone know what kind of bird this is? I've been through my bird book, but can't decide. 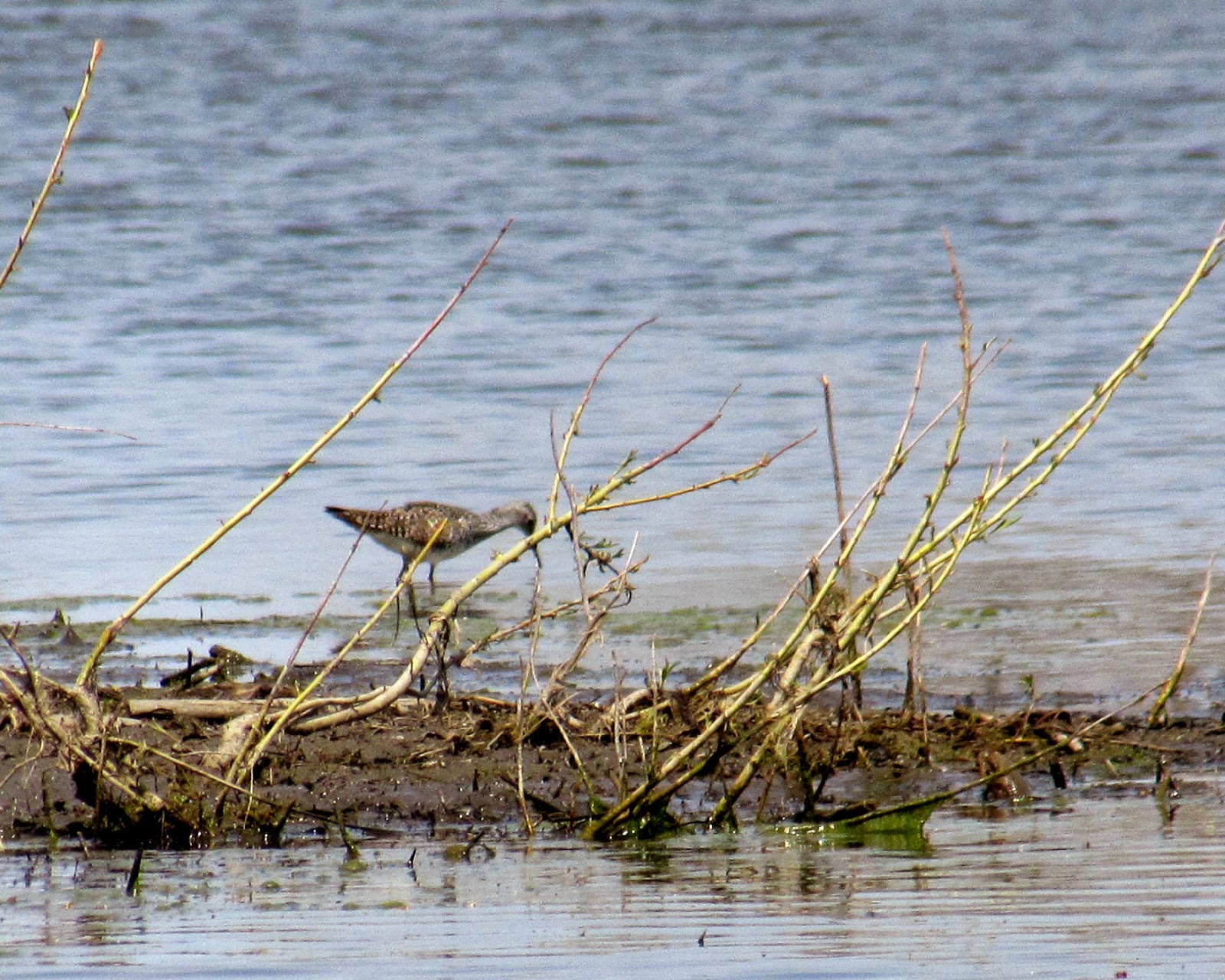 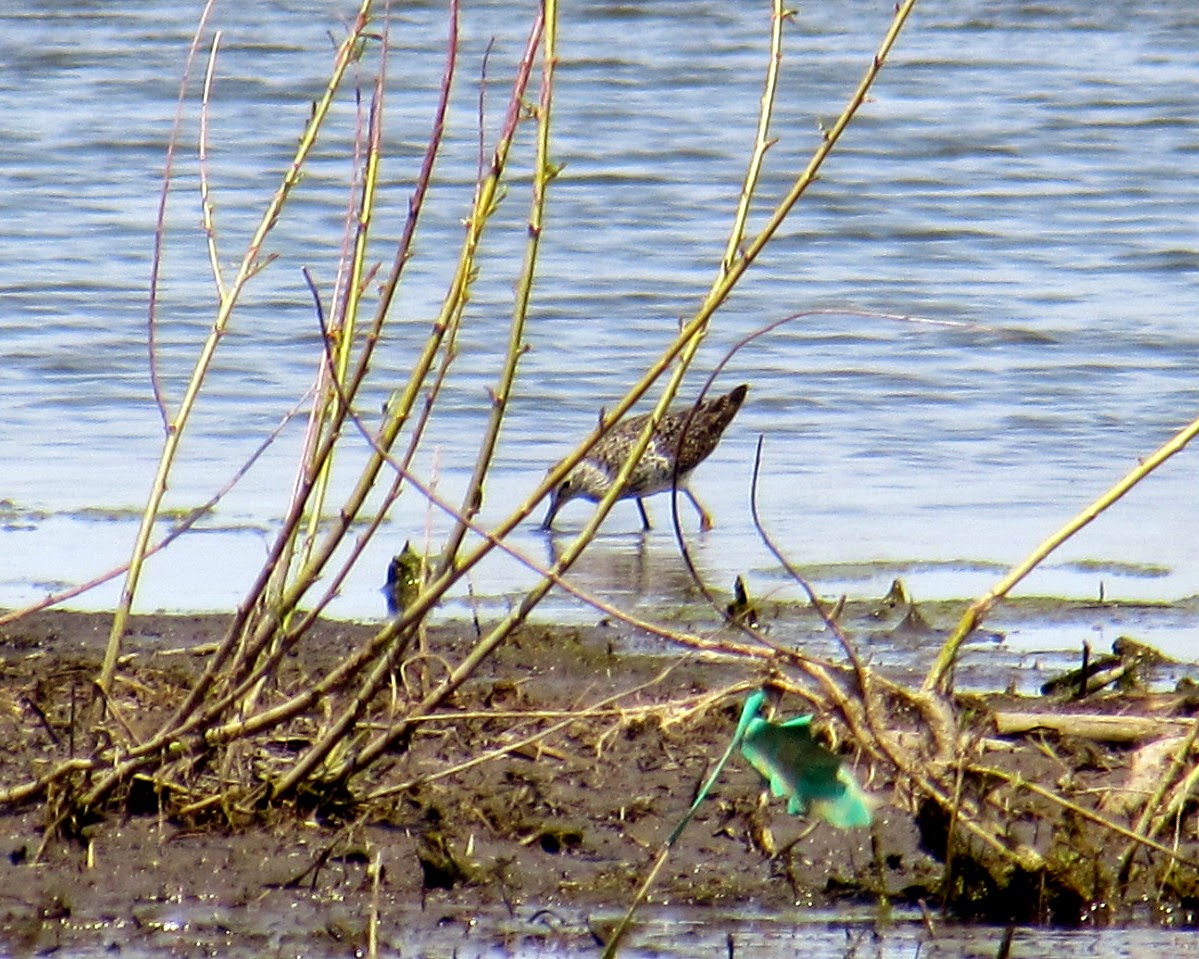 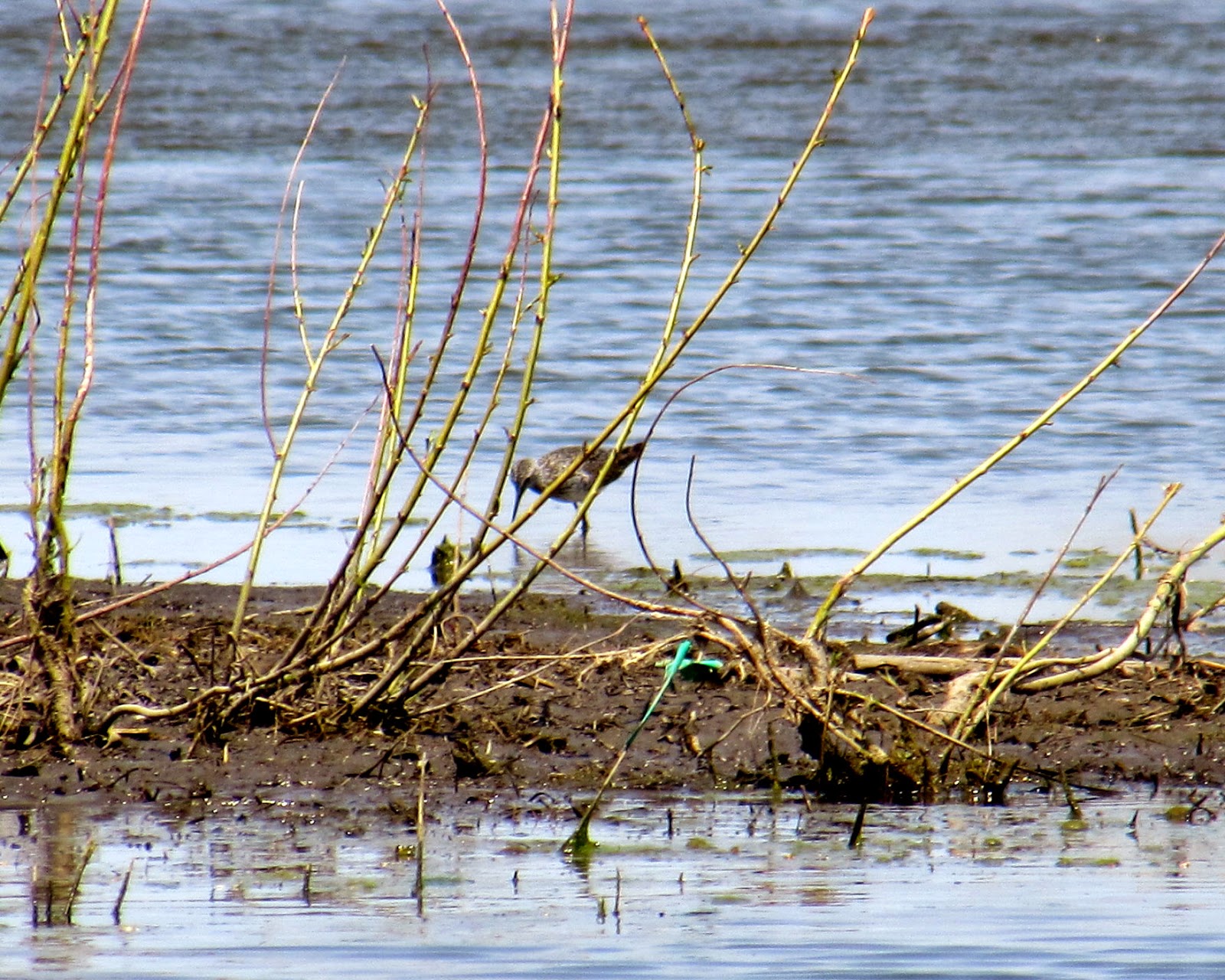 Linking to Saturday's Critters
Posted by Roan at 6:21 AM 14 comments

A Reflection and A Sky 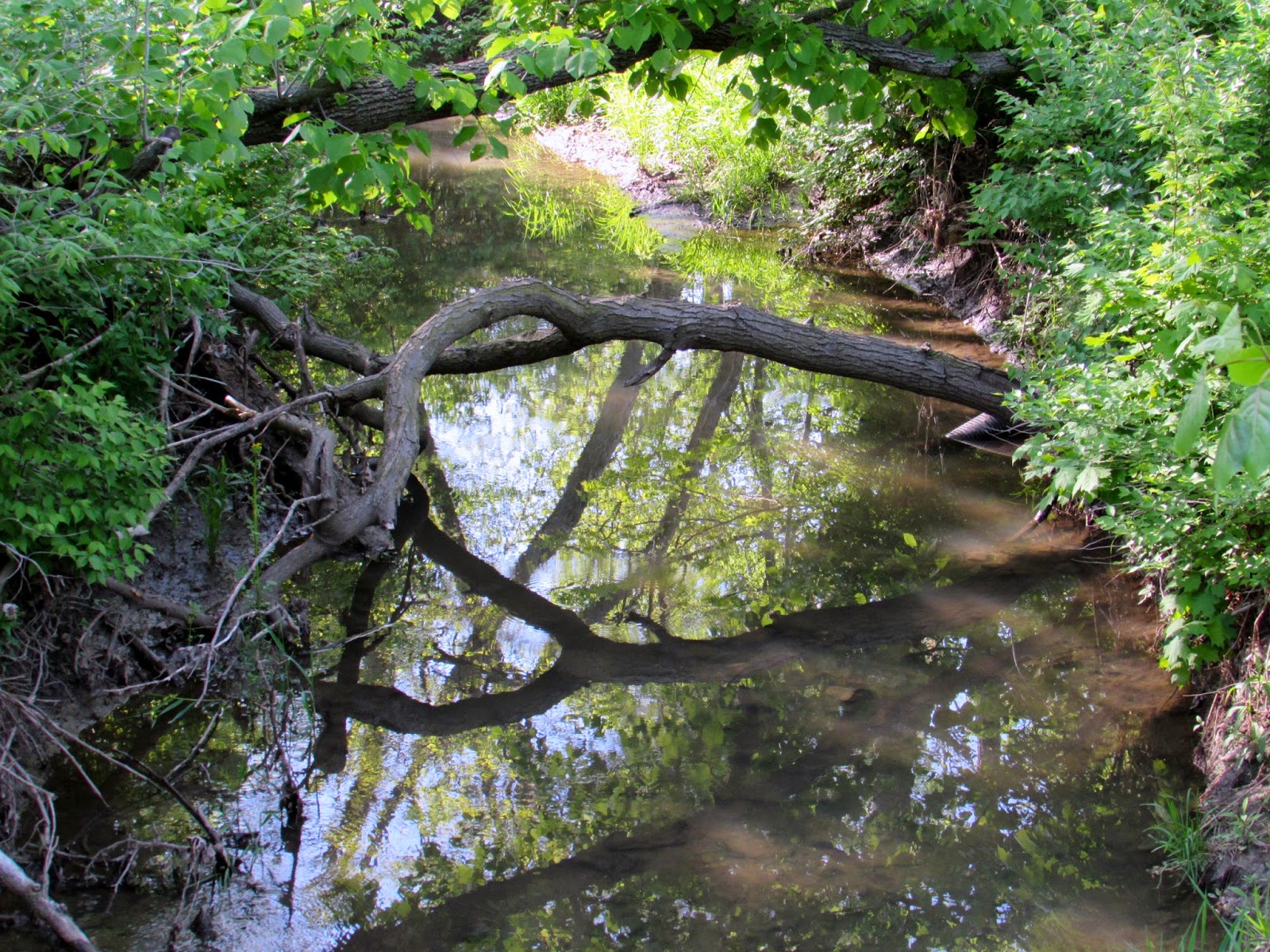 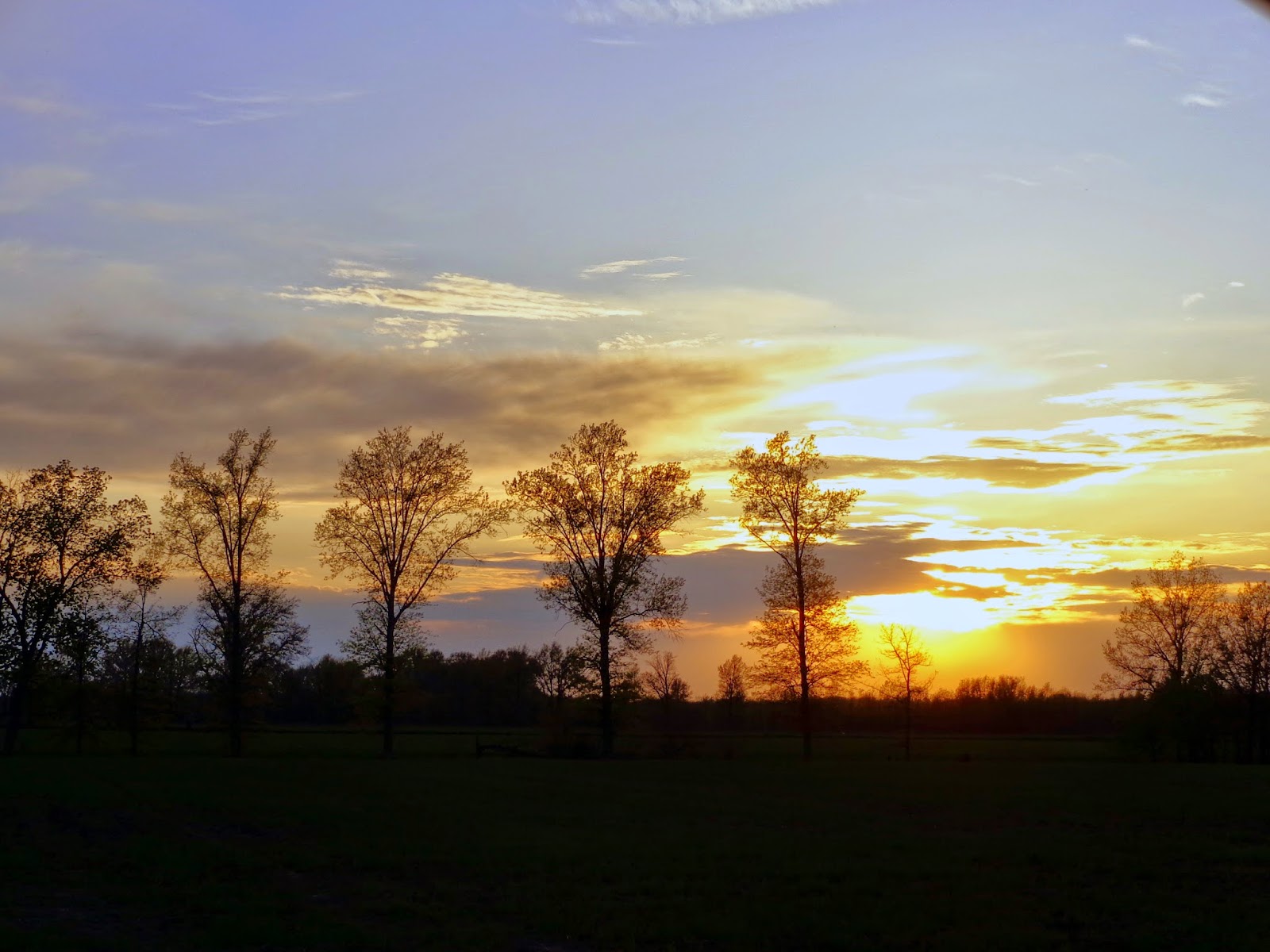 Linking to Skywatch Friday
Posted by Roan at 9:07 PM 16 comments

Saturday, Hubs had to work until closing, so I took Fergus for his first walk around Lincoln Log Cabin Historical Site. Just after we saw the Swallow in the post below, we started down a hill, rounded a curve, and saw the hog pen. He was enjoying some new scents and walked along with his nose to the ground, sniffing every blade of grass along the way. He seemed to like the delicious stench of hogs as we walked closer and closer to the pen. 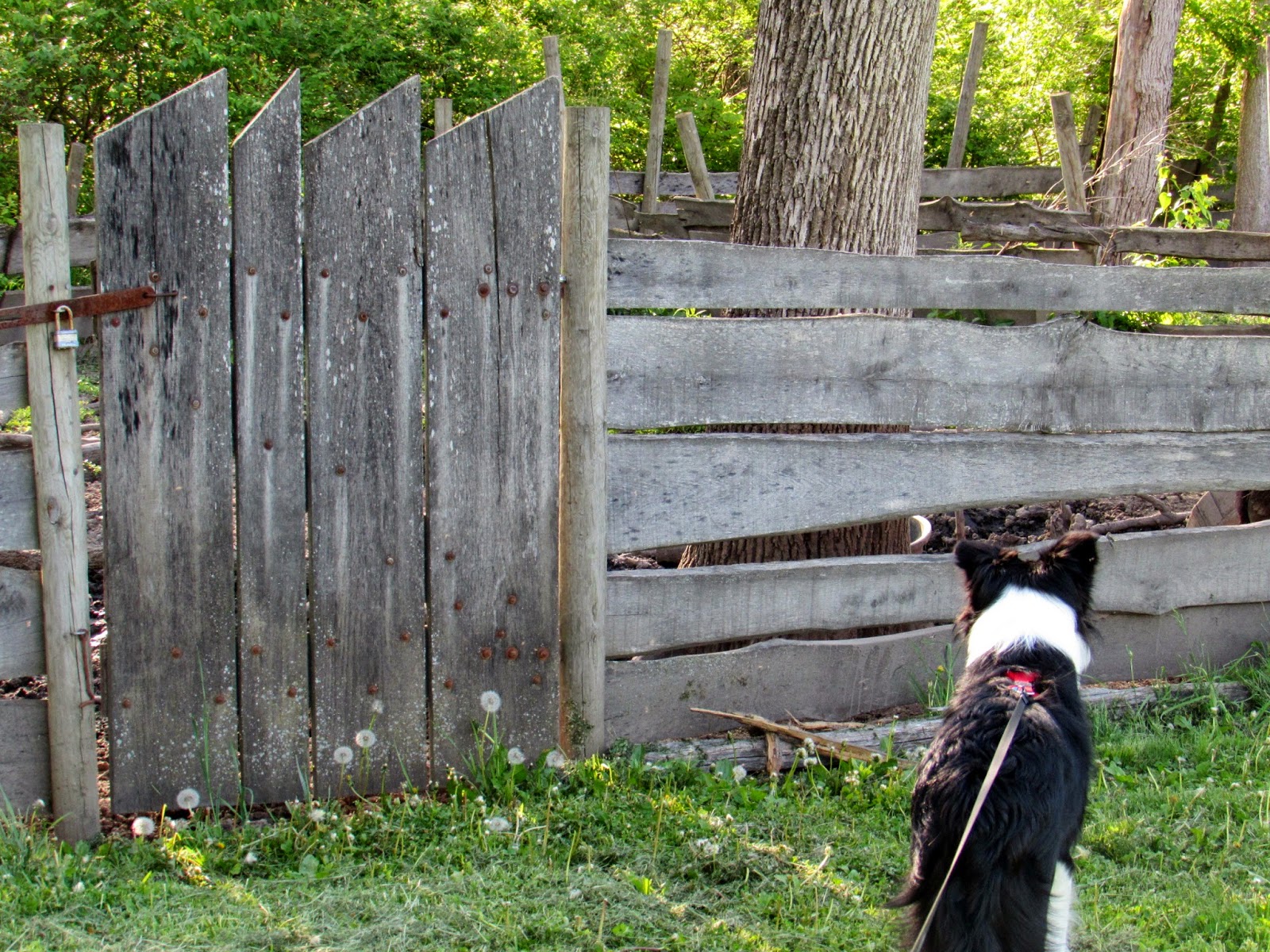 Fergus looked up briefly, and then resumed sniffing as he moseyed along. His nose was within inches of the fence (Why oh why did I not have my camera on video setting?) when a massive hog snorted a thunderous snort mere inches from a Fergus' ear.  My brave little fella let out a sound that can only be described as a scream and immediately reversed until he was back on the path. All the while he was reversing at the speed of light, he was making a strange noise, something between a squeal and a bark. I've never heard anything quite like it before. He was running backward so fast I'm sure he broke the sound barrier. I don't recall hearing the boom, but then I was laughing so hard I probably wouldn't have heard it anyway. Poor baby. I bet next time we visit he will take the long way around the hog pen. 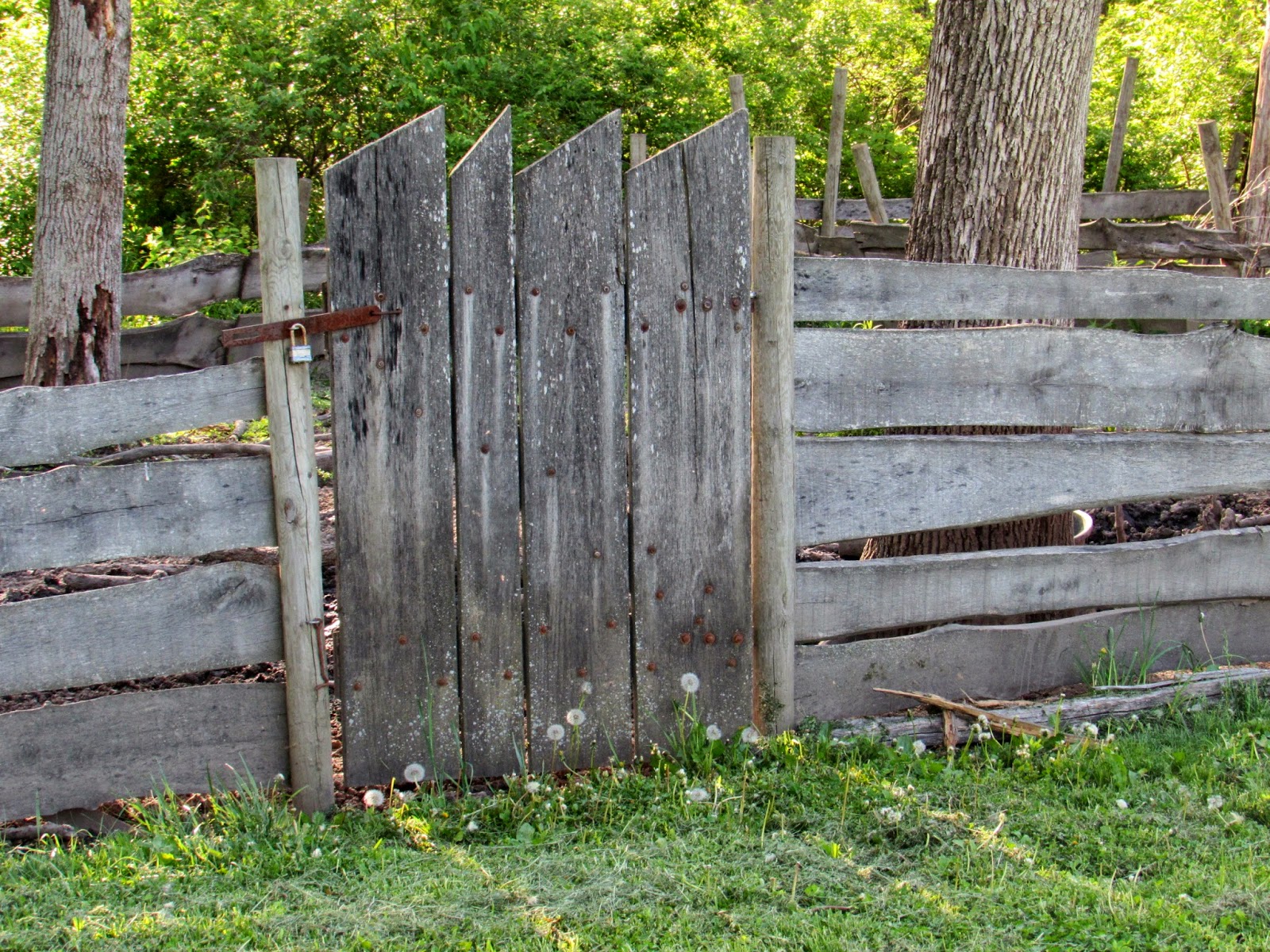 A Fergusless view of the same fence and gate. 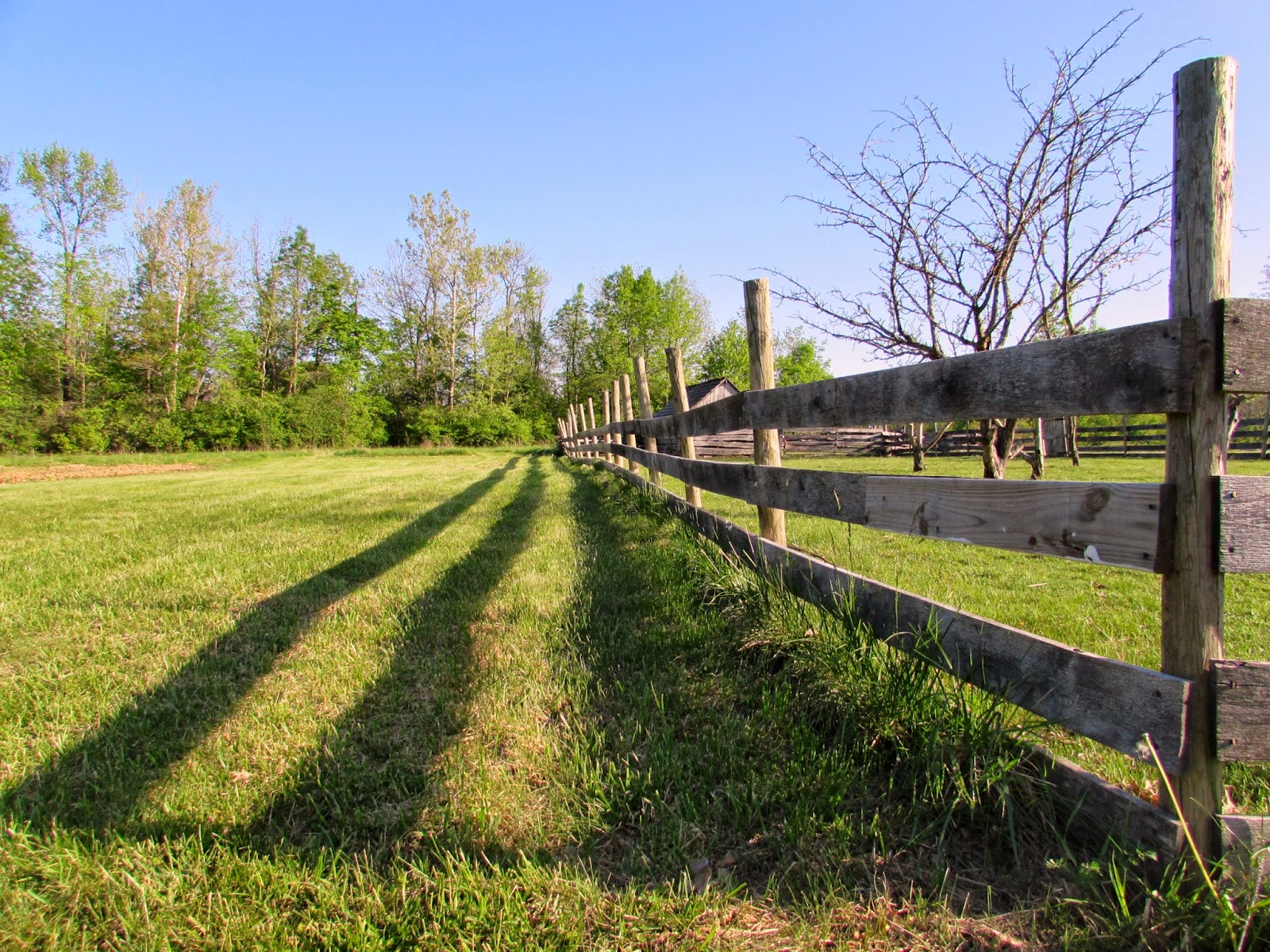 This fence was farther down the path. Fergus didn't get to see the sheep, they were all inside the barn for the night. Fergus is a Border Collie, supposedly a sheep herder. I wonder if he would be as afraid of sheep as he was the hog.

Linking to Good Fences
Posted by Roan at 6:57 PM 33 comments

This must be my year for Swallows. First a Tree Swallow and now a Barn Swallow. He was way across the sheep lot, where he thought he was safe. 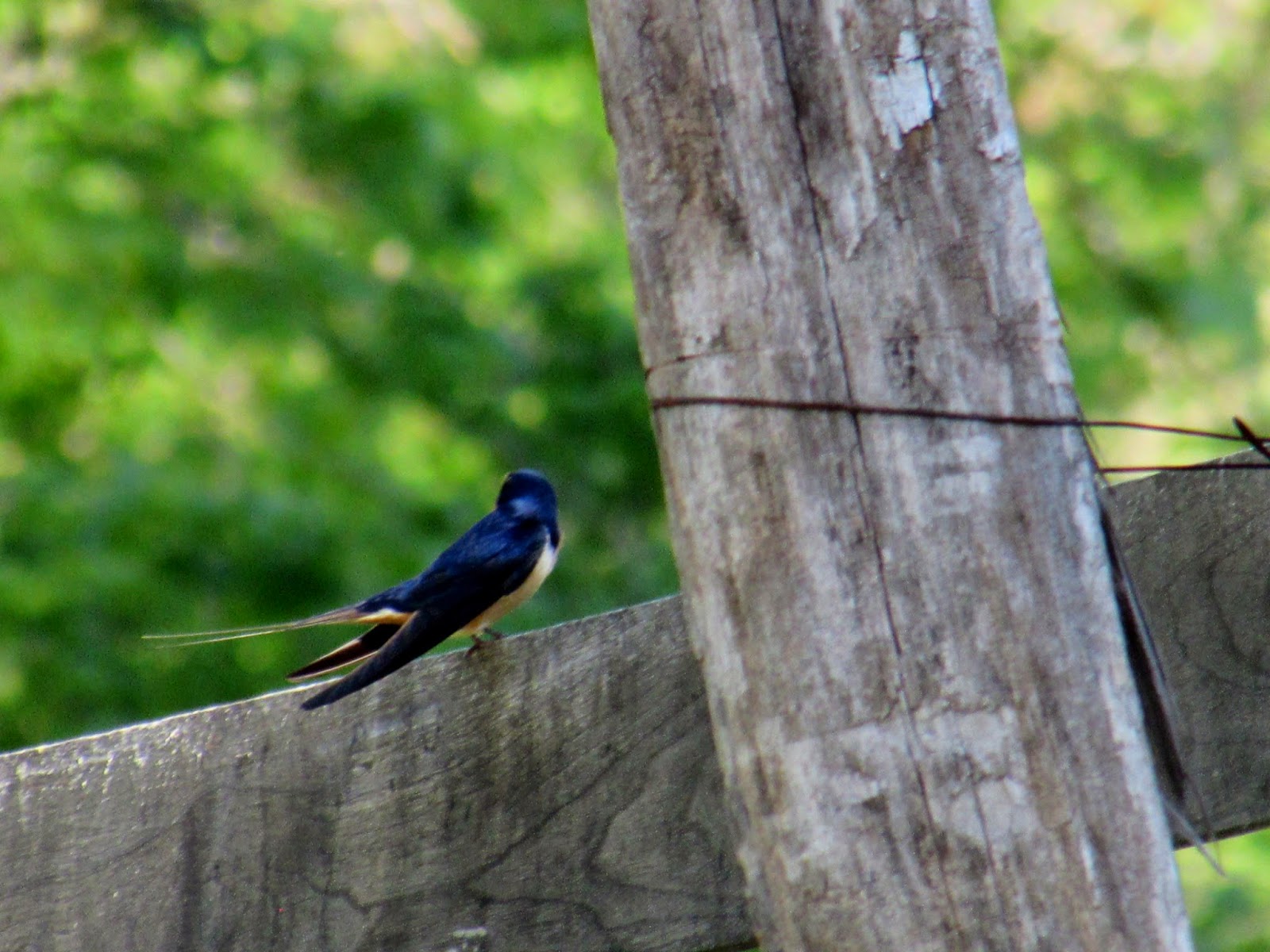 Mr. Gorgeous tried to give me a moon shot, but I was too quick for him. 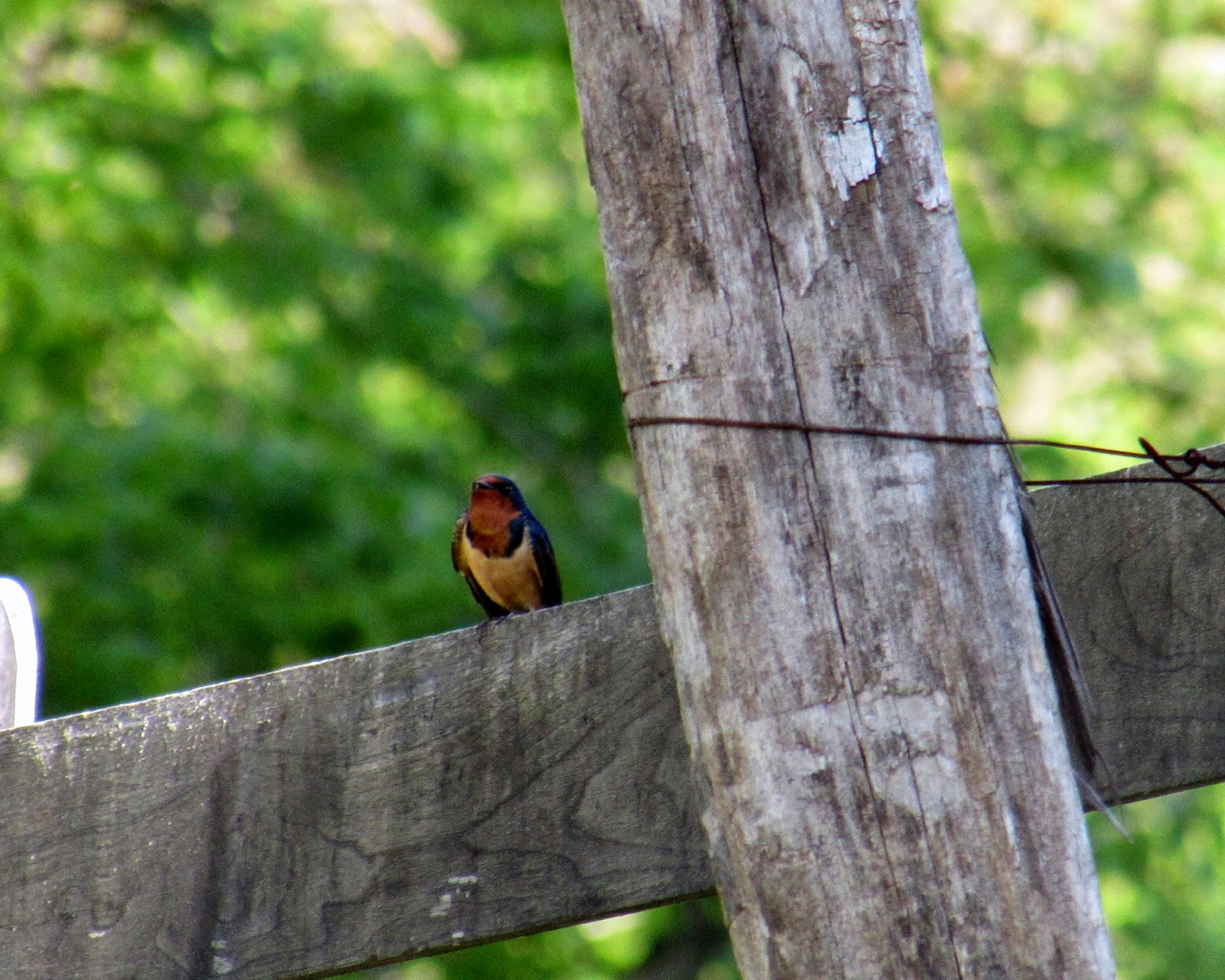 He finally turned around and allowed me to get a shot of his front side.


1. It's still May, right? When were you last in the middle of something that might be described as mayhem? Mardi Gras!
2. When did you last feel dismayed? When a co-worker gave notice.
3. What's a food combination you like, but other people may find strange? Peas and cottage cheese.
4. "It is never too late to be what you might have been." Do you think that's true? Why or why not? It depends on what 'you might have been'. I wanted to be a hand model back in the day. Don't think I would find much work now that my hands are aged, wrinkled.
5. US News and World Report listed the best historic destinations in the US as follows-Washington D.C, Philadelphia PA, Williamsburg VA, Charleston SC, Boston MA, Richmnd VA, Savannah, GA, Santa Fe NM, Yellowstone, San Antonio TX, San Francisco CA, New Orleans LA, and Charlottesville VA.
Of those listed how many have you seen in person? Which two sites on the list would you most like to see in person? I've been to 9 of these locations. Of those I haven't seen, I would pick Yellowstone and Savanah, GA to visit.
6. May is National Physical Fitness and Sports Month. If you had to participate in a single fitness activity for the next half hour, which activity would you choose? Hiking in the woods.
7. What did you like best about the city, town, or neighborhood where you grew up? I grew up on a farm. I liked that we had a pond and woods to spend time exploring.
8.  Insert your own random thought here. Thursday marks the beginning of our Spring Festival. I got the call to schedule my time to be incarcerated in the ticket booth. I usually get an early slot, but this year I'm stuck with 7-9 pm. Two hours is a long time! But I enjoy seeing all the happy little ones looking forward to their turn on the kiddie rides.

Linking to Wednesday Hodgepodge
Posted by Roan at 9:50 PM 13 comments

It's that time again. For those of you who wonder why Rubbish Tuesday is posting on Monday, I've decided to leave the link open for 3 days so everyone who wants can participate.

The idea is to post a photograph of anything old and/or deteriorating, i.e. house, barn, outbuilding, something rusty, antiques, interesting junk, or something in pristine condition, but just plain old. 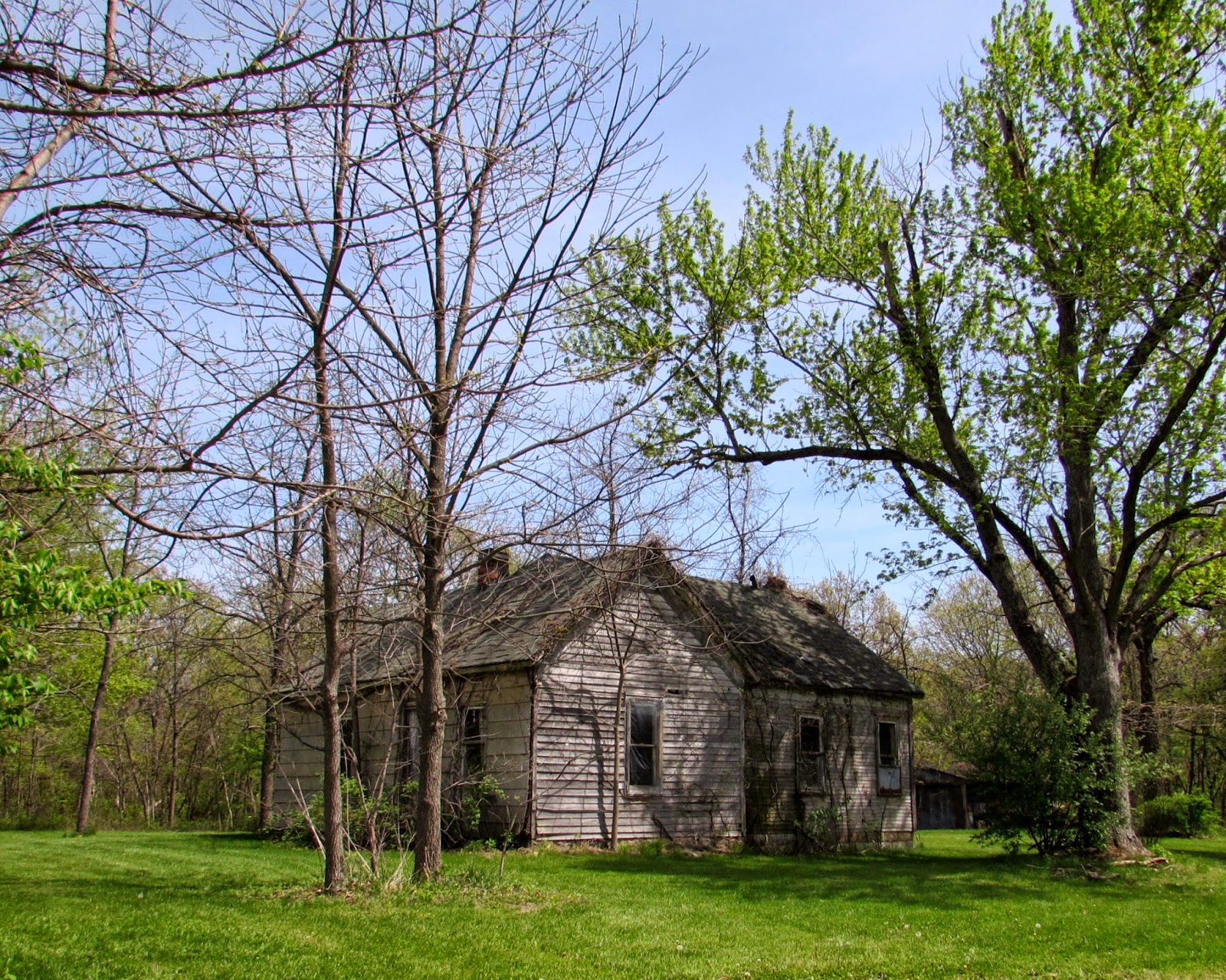 I saw this old house during last weekend's ramble through the country. It is old, abandoned—one of those houses that makes you want to know its story. As I drove by, I thought the house looked familiar, but couldn't figure out why. About a quarter mile farther down the road, on the opposite side, I recognized the yard where my Aunt Edna's house used to be. Aunt Edna was my dad's sister. Then I remembered.

We affectionately called the resident of this house, Old Man Pruitt. He was a very nice man and he may not have been as old as I thought he was when I was 10, but he looked older than Methuselah to me. My aunt was a widow and Mr. Pruitt was a widower. The neighbors met, fell in love, and married.

The one thing I remember most was their wedding reception which was held at their house. The couple planned to leave the next day for a honeymoon and my cousin had some mischief planned. She found Aunt Edna's packed suitcase, pulled out her shoes, and filled them with the contents of an entire box of salt. I was blameless although I did watch her do it and thought it was a nifty idea. 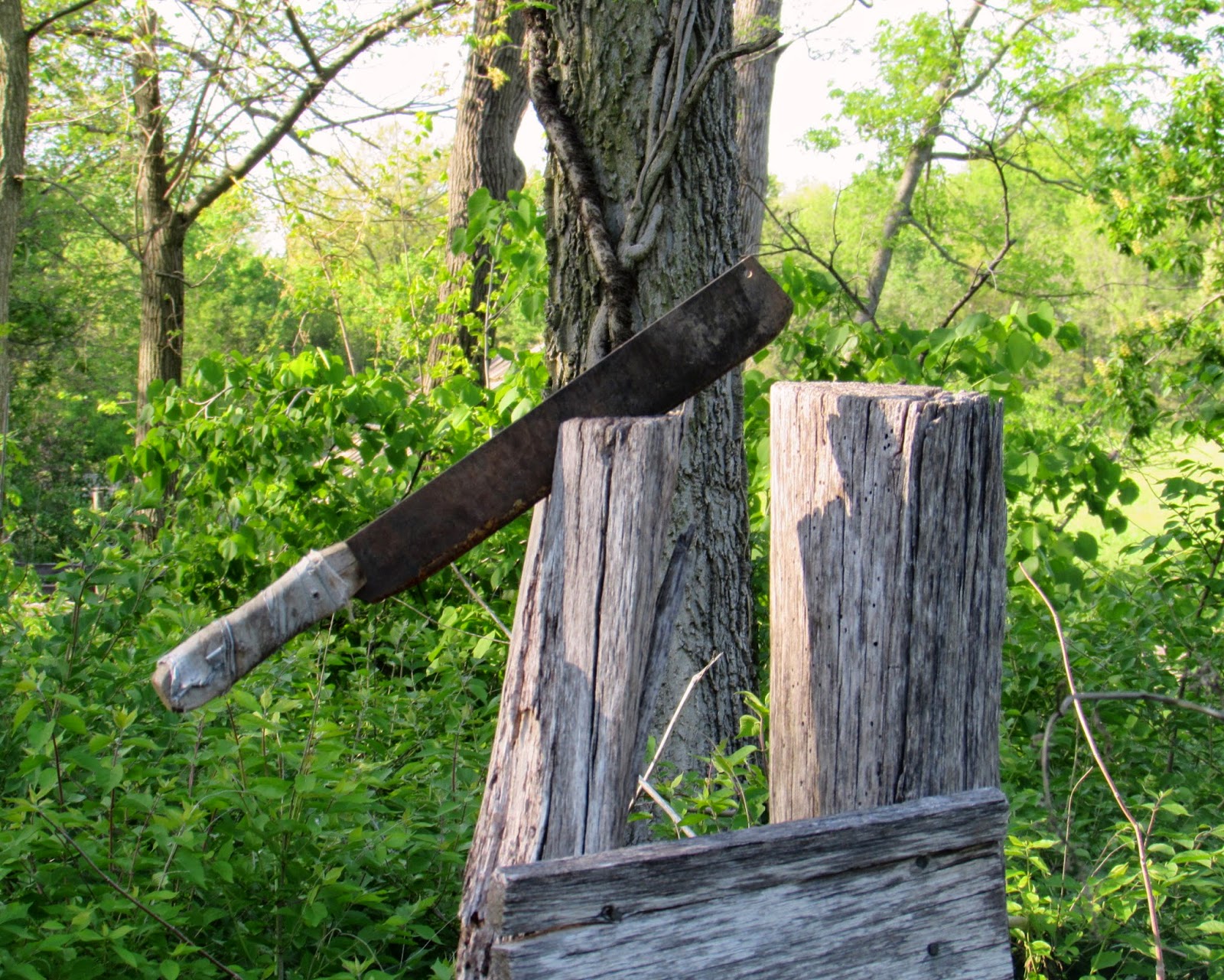 Saturday I took Fergus for a walk around Lincoln Log Cabin Historical Site. As we were walking past the recently planted garden, I saw this old broomcorn knife stuck in a post. Odd, but old.