Still making use of my fair trip. We found some goats hanging out in one barn. 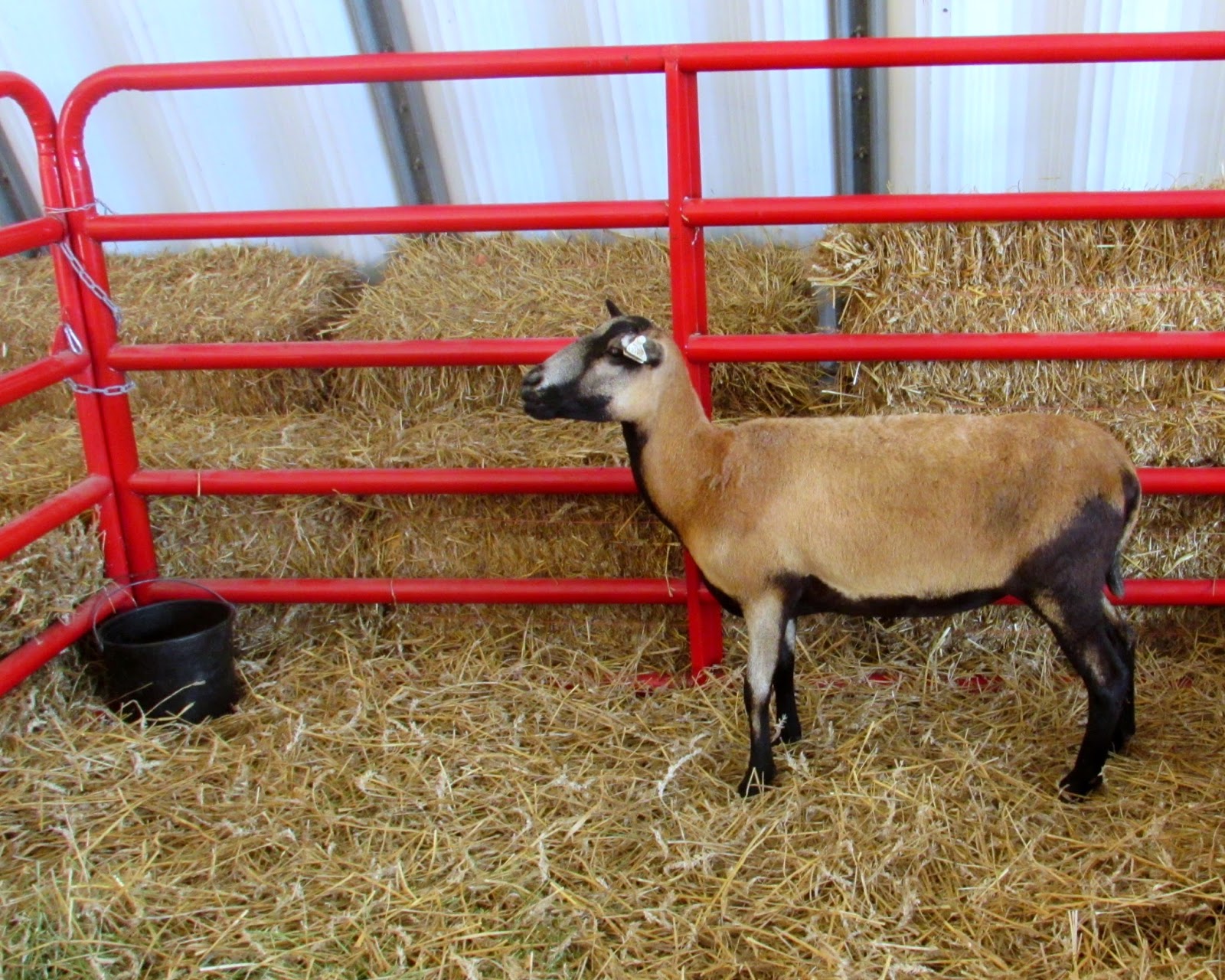 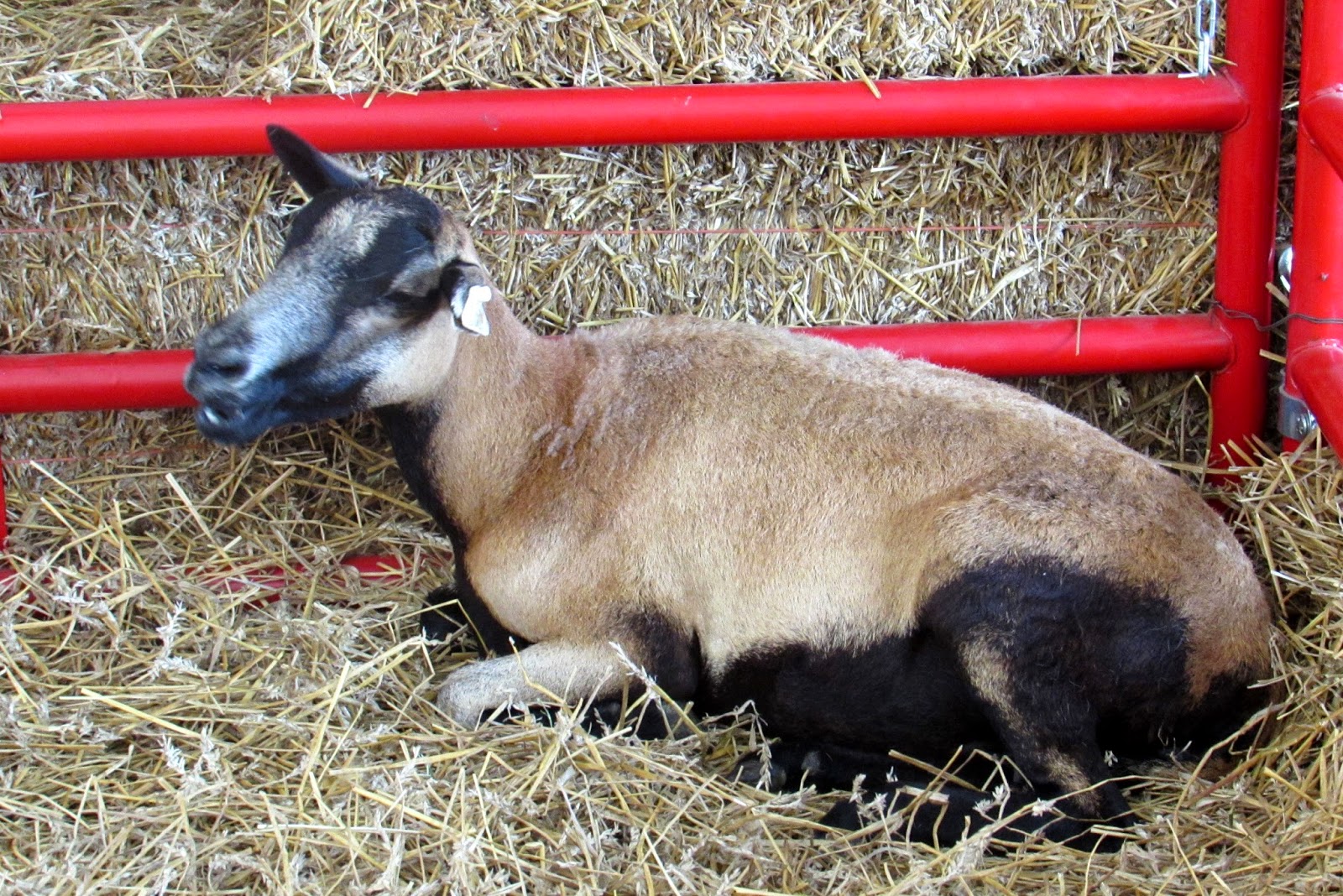 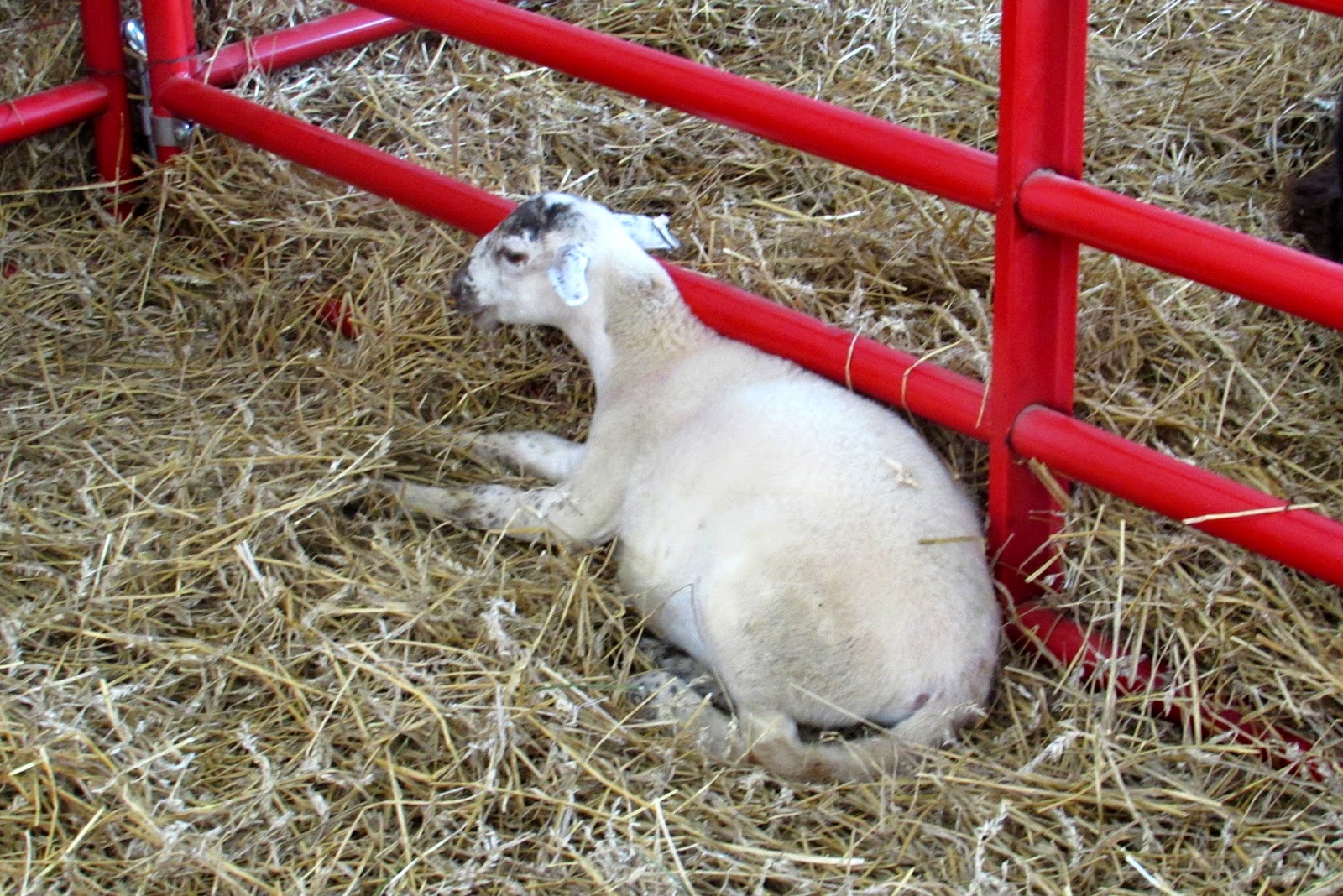 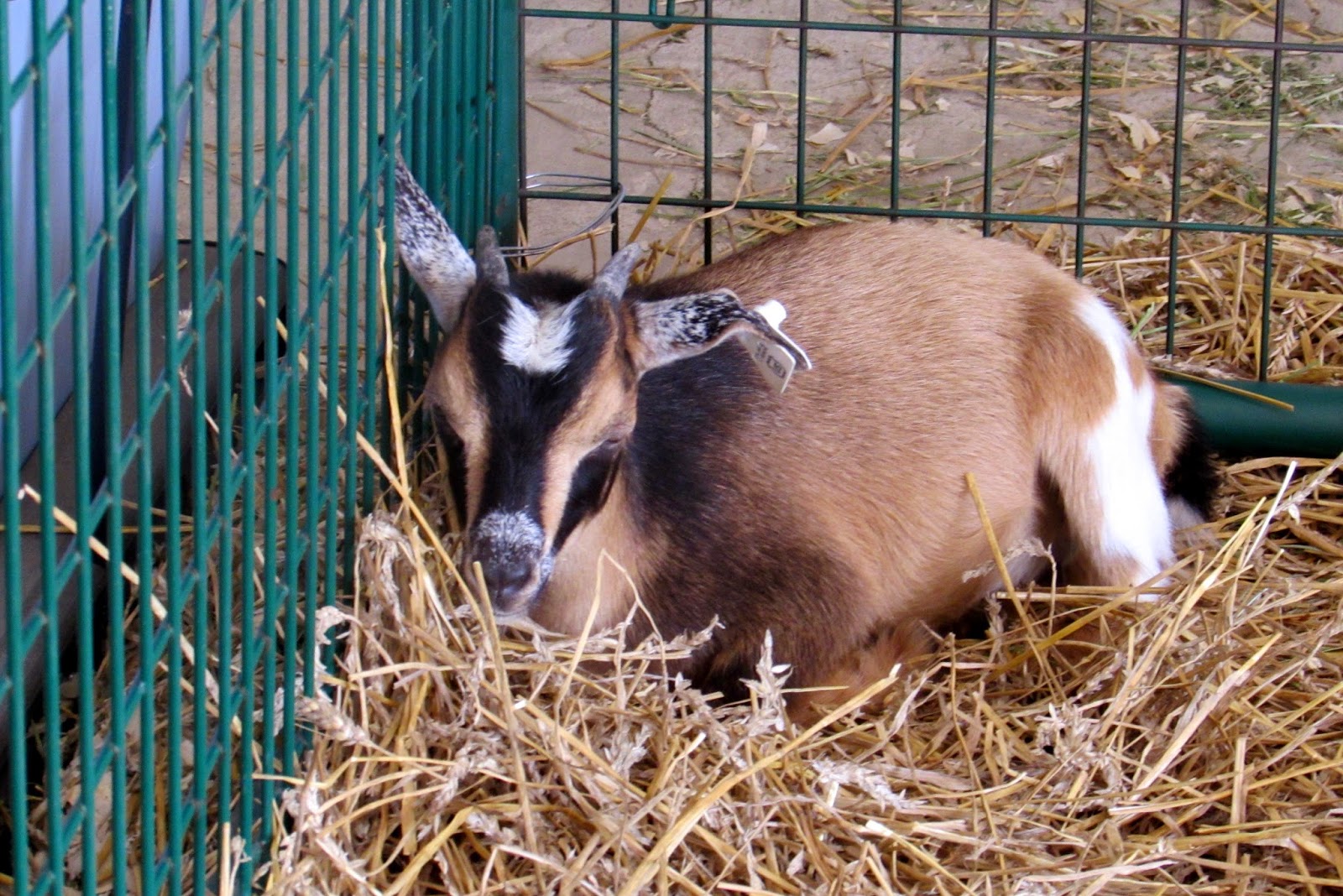 
I'm sort of posting on my Wordpress blog, Stuff and Nonsense. I may have to switch to it again since I'm having so much trouble with Chrome and the verison I have of IE is not compatible with Blogger.  I have another post here—Stuff and Nonsense.

Don't Fence Me In

Still making use of my fair visit a week later. 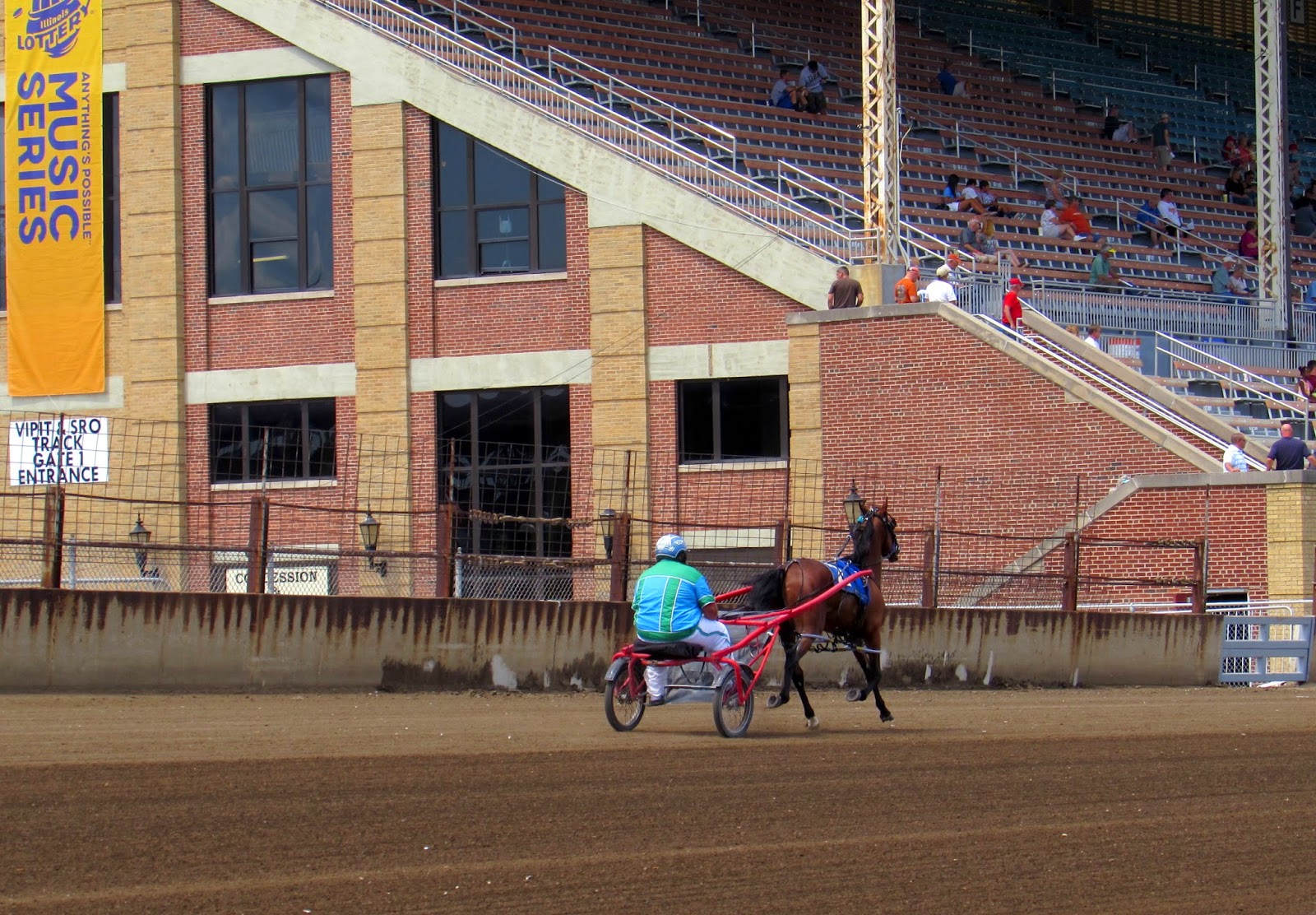 A fence with a horse in front of it. 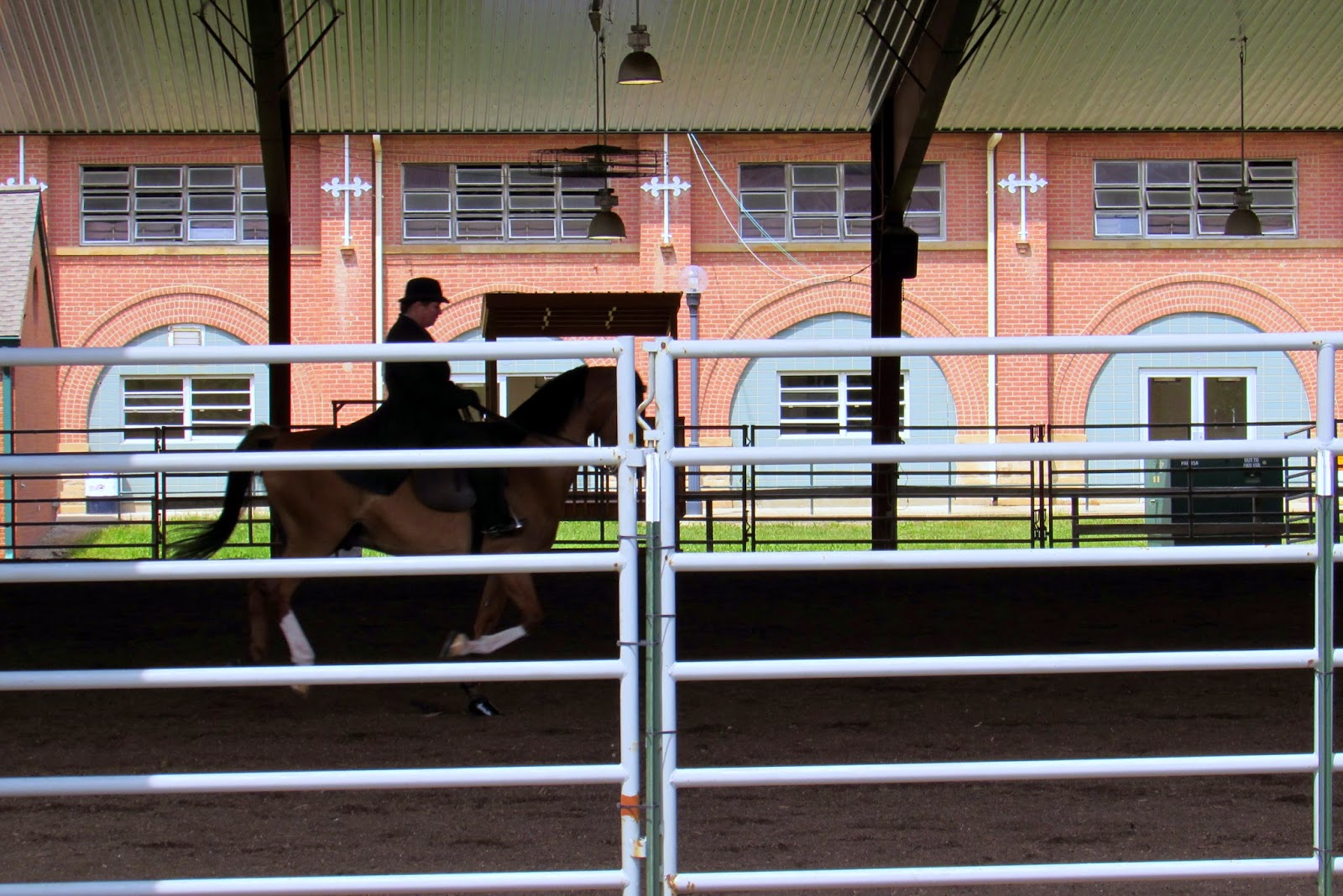 A fence with a horse behind it. 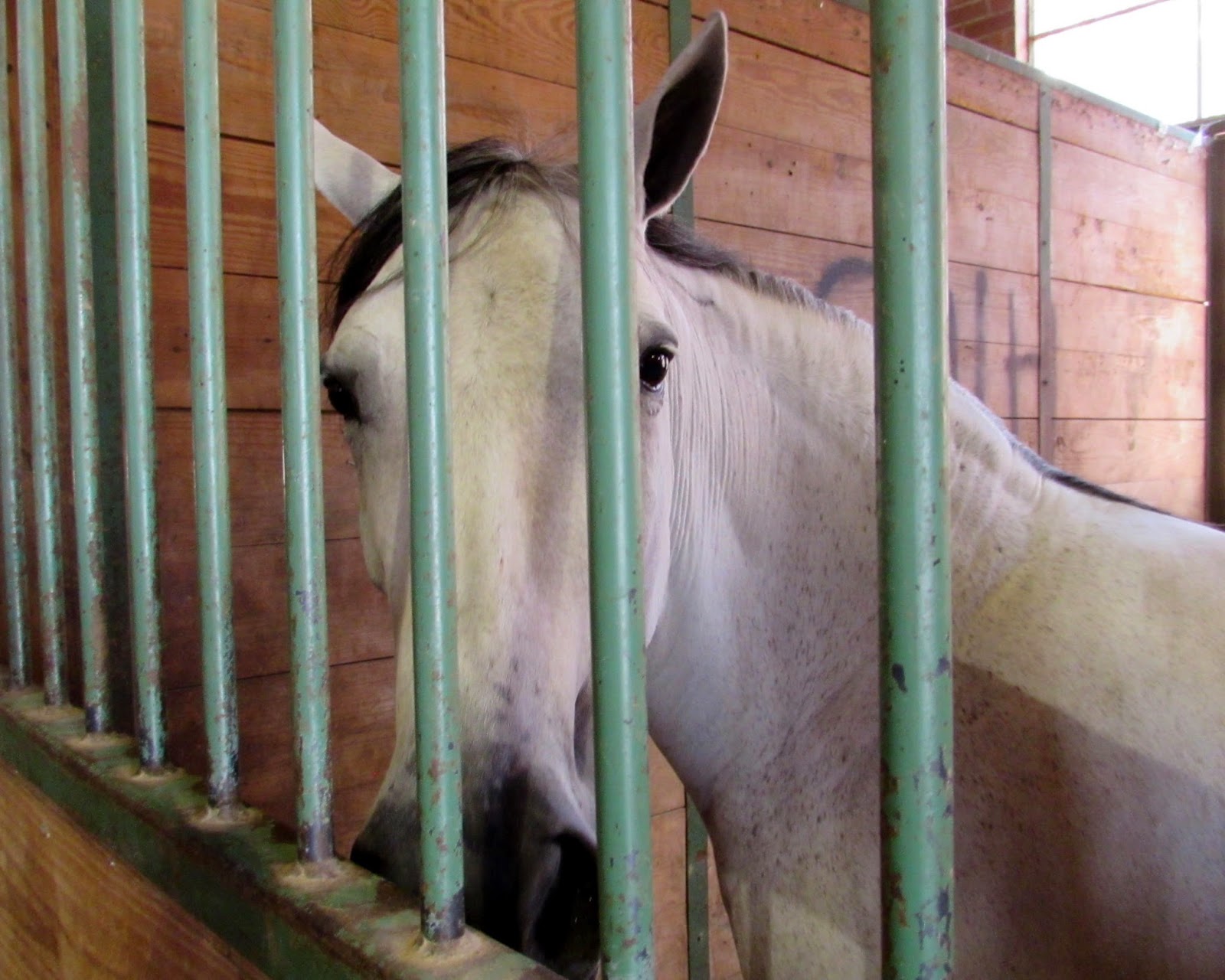 Not quite a fence, but fenced in none-the-less.

Linking to Good Fences
Posted by Roan at 6:09 AM 30 comments

I don't have a bird to post today and Wednesday Hodge Podge is taking a break, so I'm at a loss as to what to post. So, I went back to the State Fair and found some odds and ends which might be of interest.

I like to people watch. As a writer, I'm always looking for interesting characters. I found a few at the fair but only took a couple of pics—secretly. 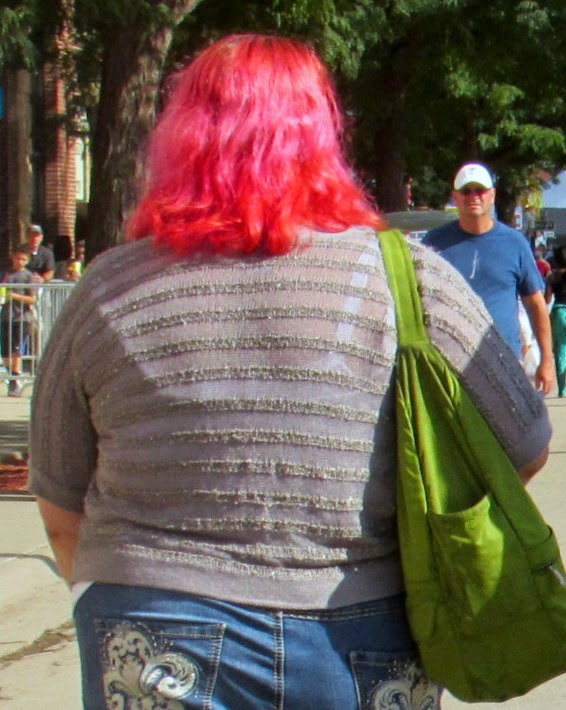 Does anyone really think this is an attractive look? I know I'm getting old but I don't  understand gaudy hair colors. And then there is the purse. I love green, but alongside the hair color—oh my! This I like. Do you suppose this guy is a patriotic train engineer? 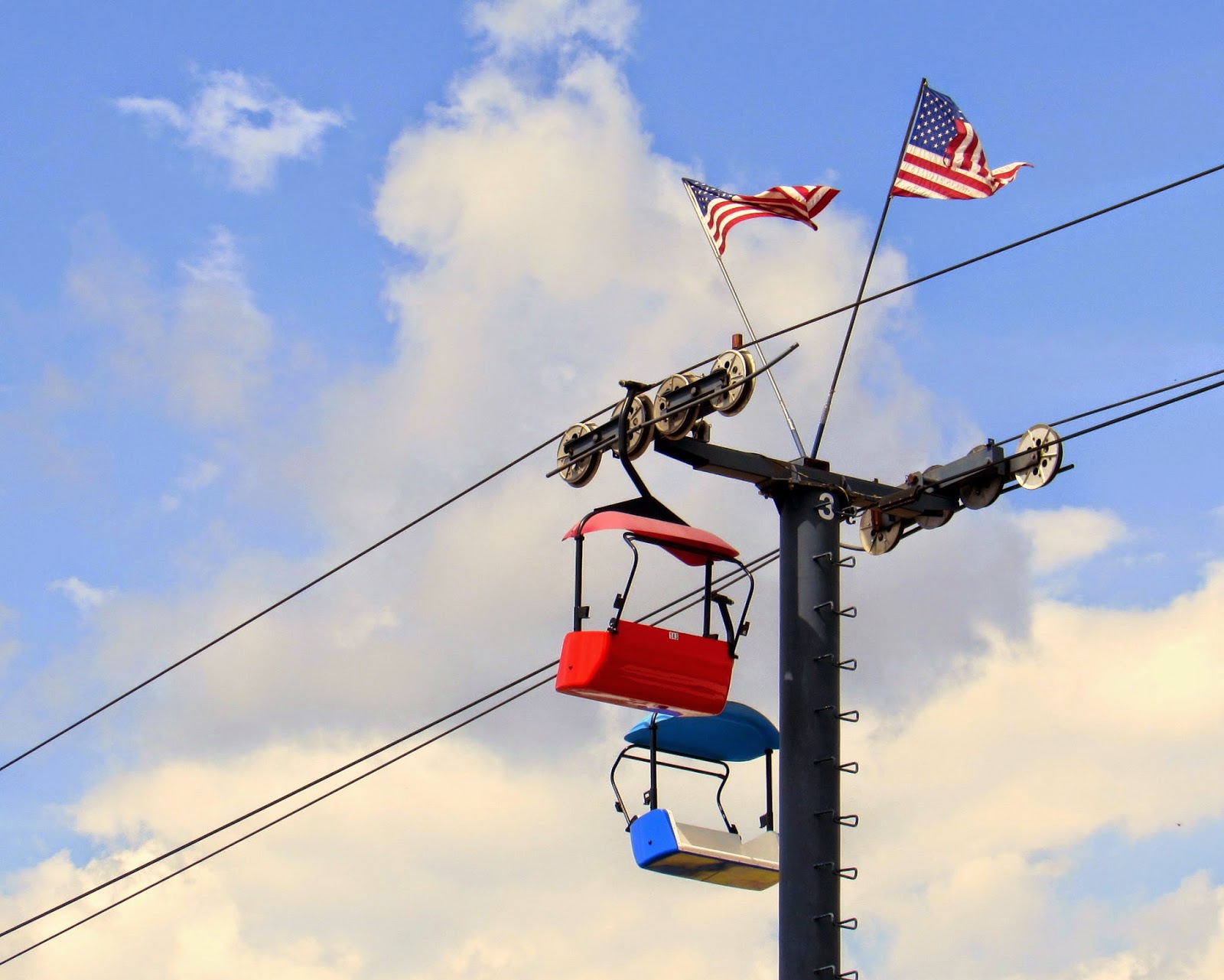 And speaking of patriotic... 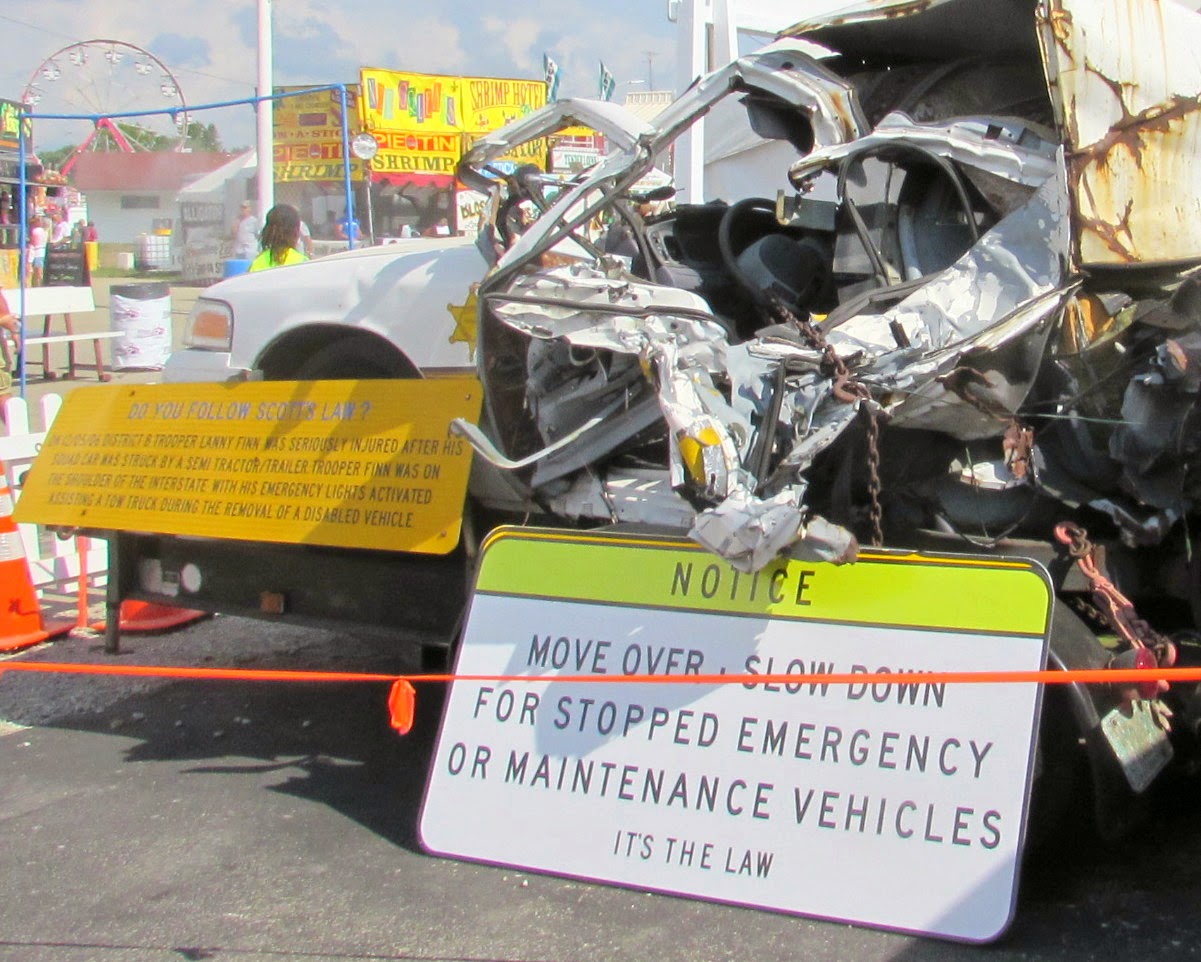 Ending with Scott's Law. Do you have a Scott's Law in your state? This officer lived, but he was seriously injured.

No linking today. Happy Wednesday!
Posted by Roan at 6:43 AM 22 comments

All of the permanent structures at the fair are old. 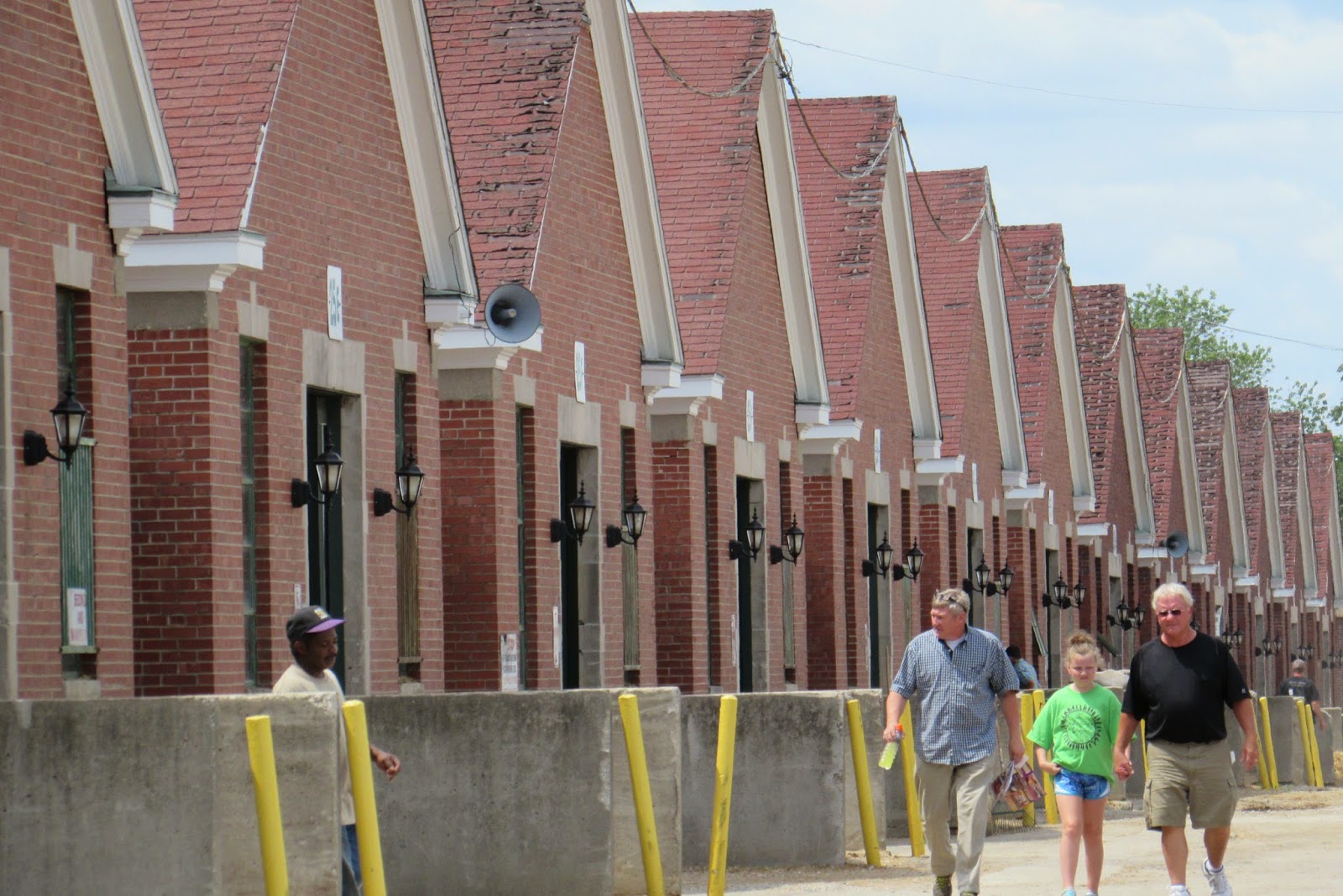 Including this section of stables. I think they will need new roofs soon. 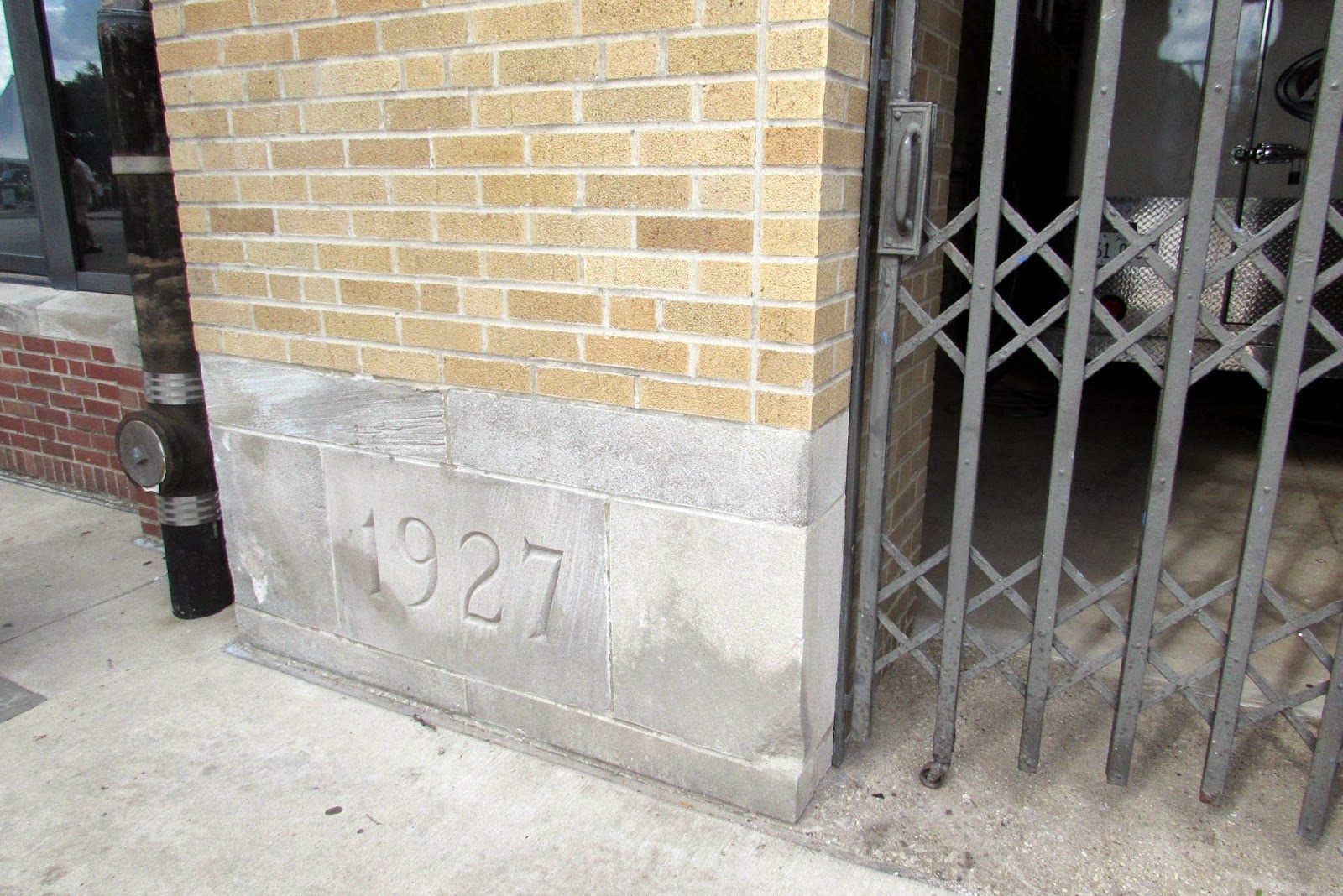 This is the grand stand entrance. Built in 1927. 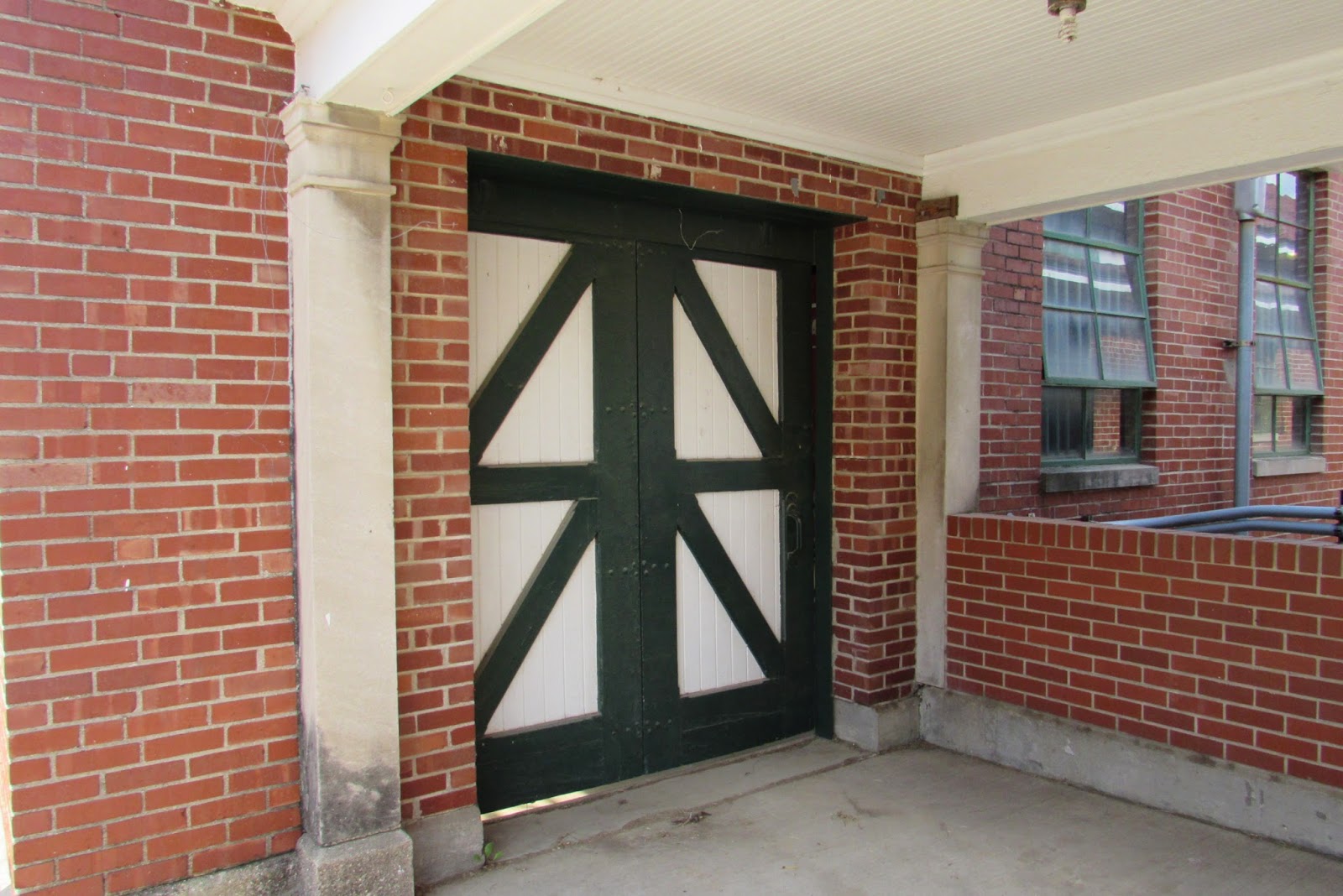 This is the entrance to one of the horse barns. Old doors freshly painted. 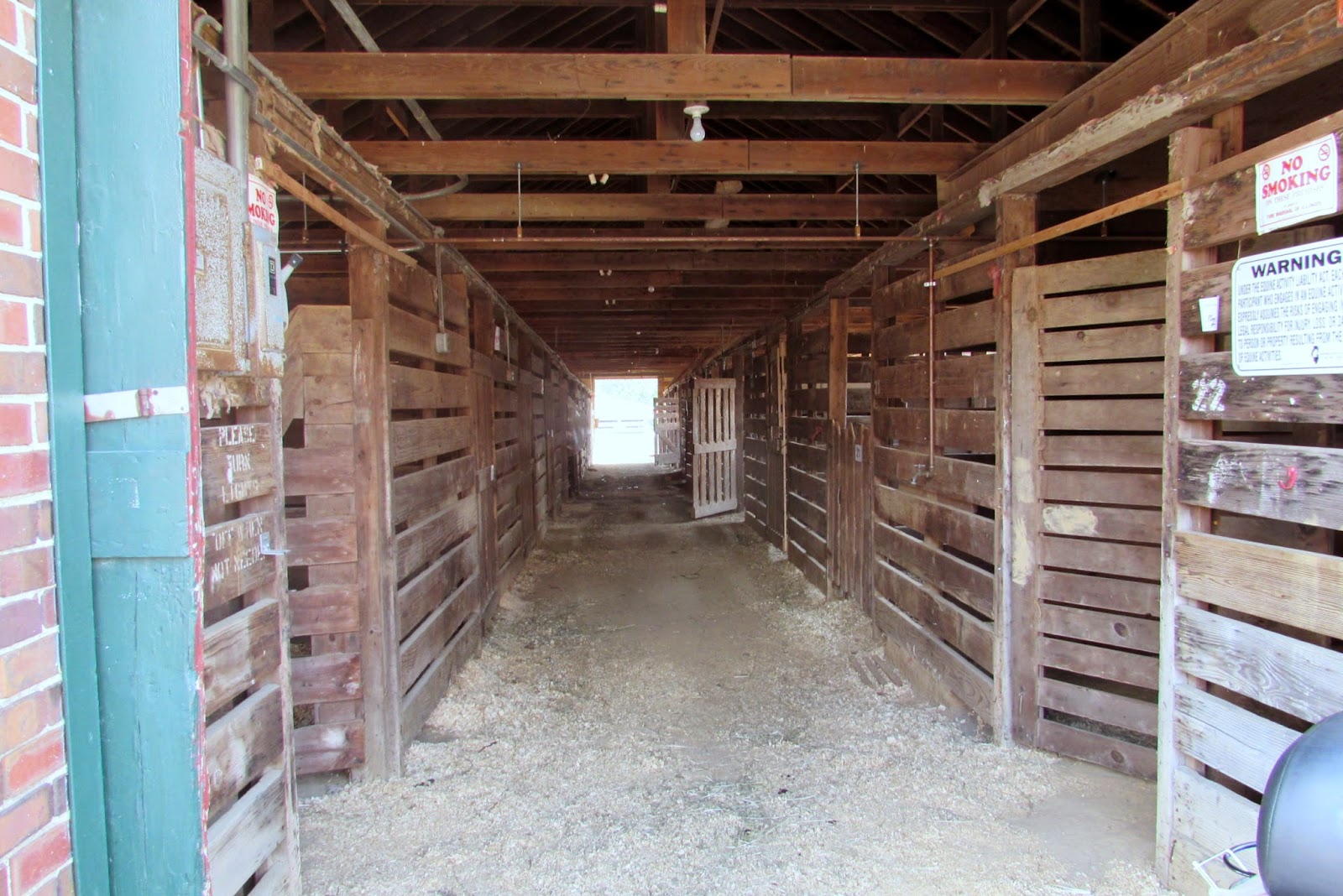 These are even older stables. Not too many were occupied. Most selected the newer old models. 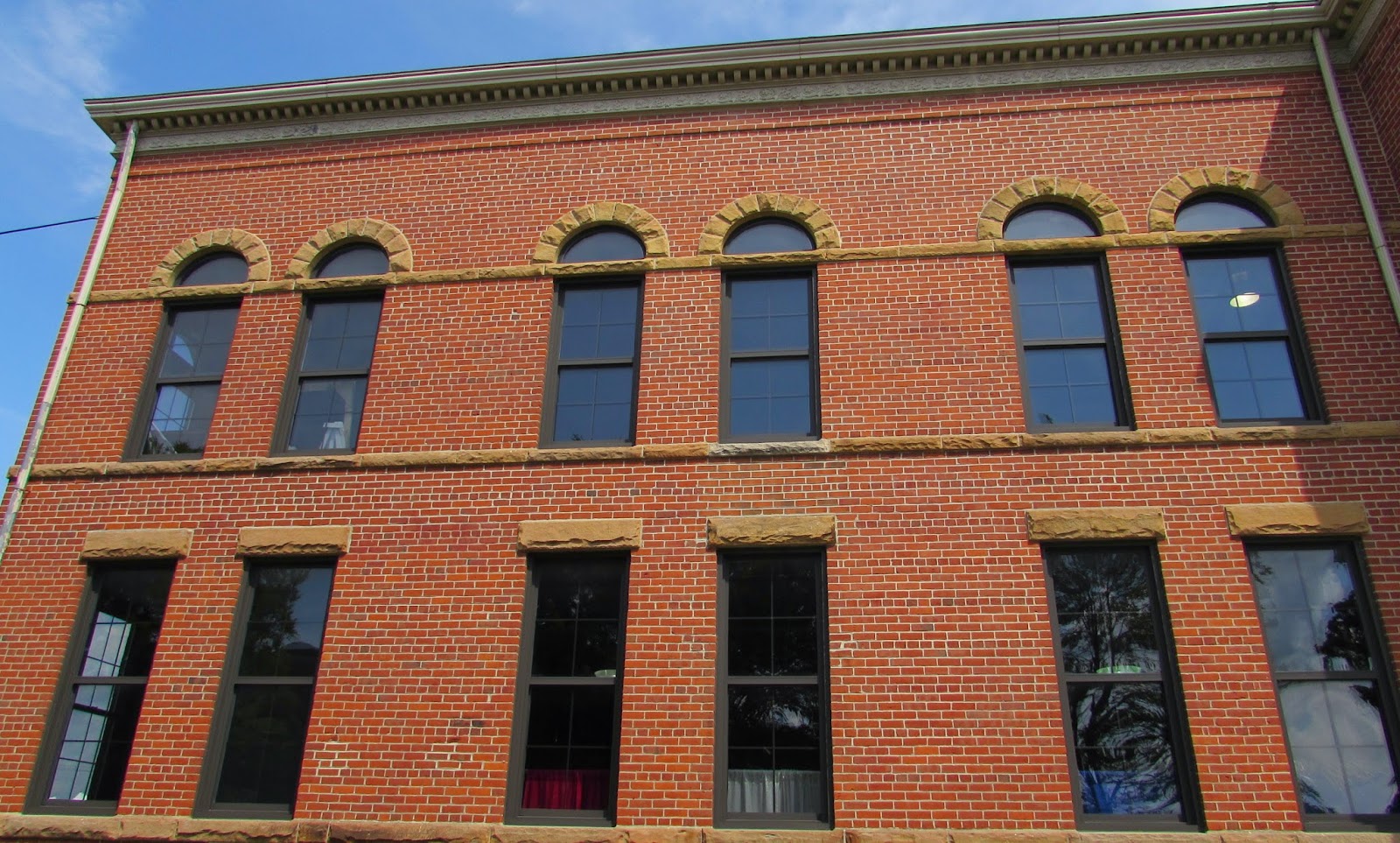 This building housed merchants. We went in to look at the western jewelry, but we didn't find anything we couldn't live without. It is in very good condition. I like the architecture. 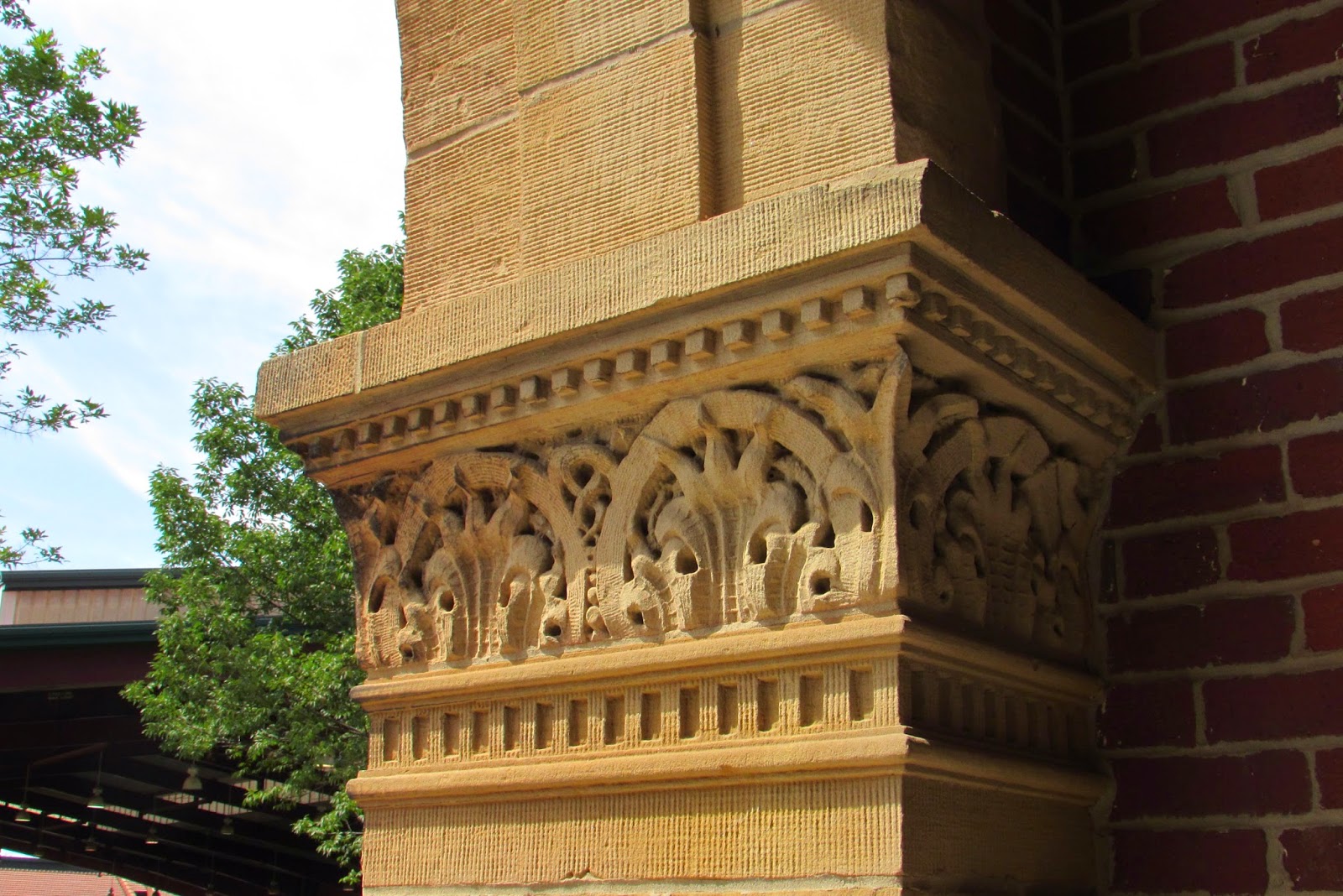 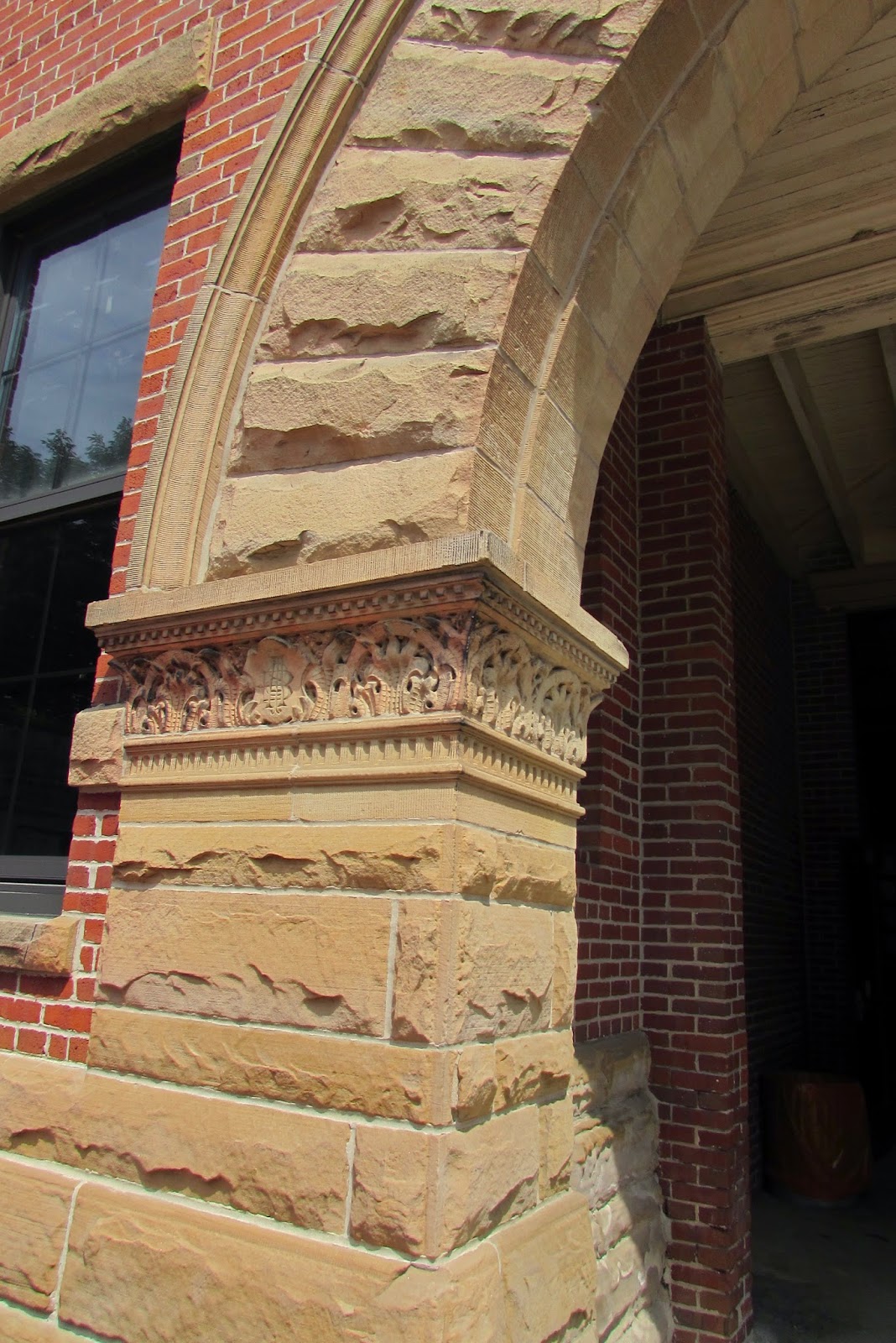 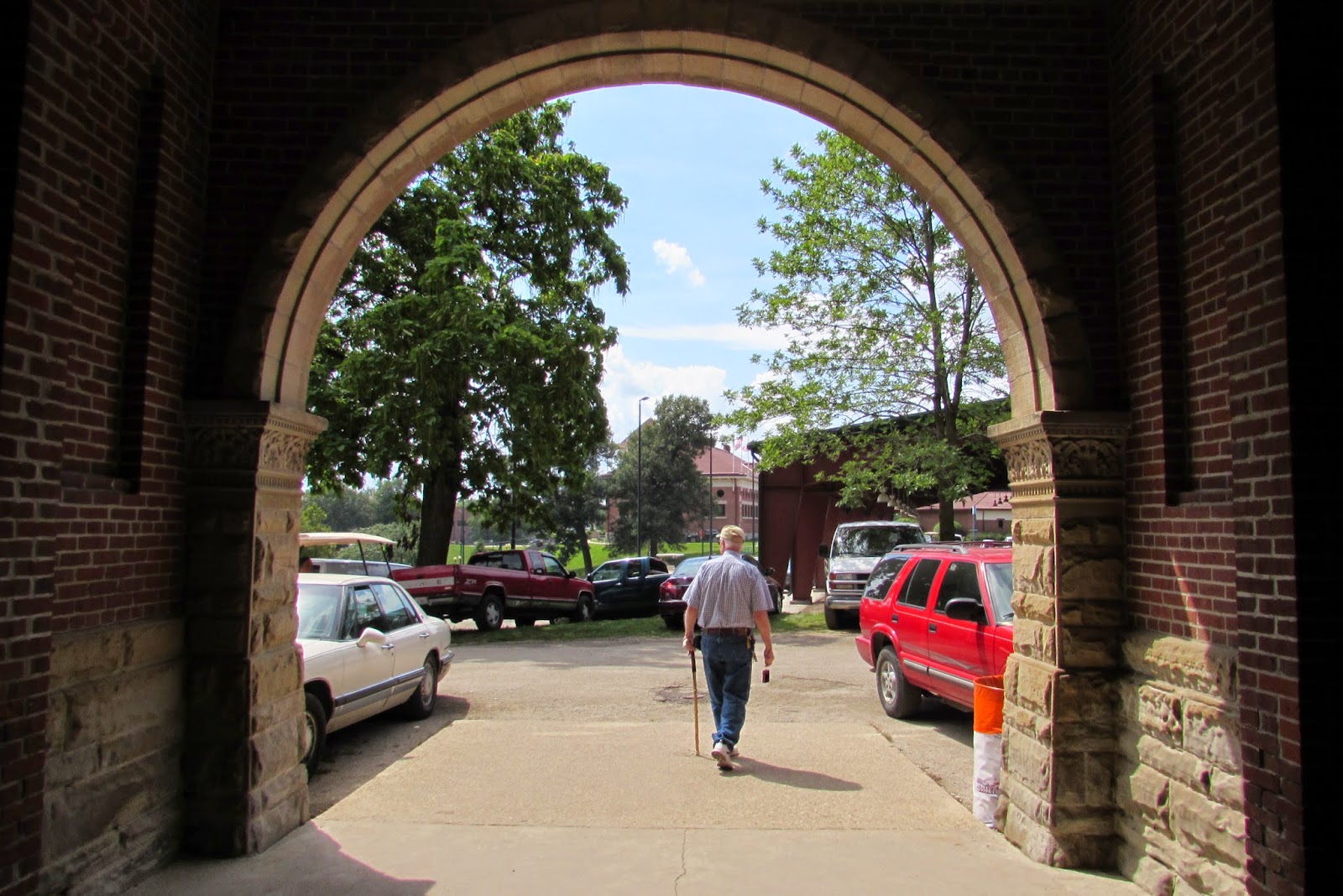 This is the arched doorway we went through as we were leaving. That's JD walking ahead. I'm always lagging behind taking pictures. He says he fits perfectly in a post about all things old.


Thanks for stopping by. I hope you will join in the fun.

1. Link to a post featuring photos of something old.
2. Link back to Rubbish by Roan in your post.
3. As time allows, visit other participants and comment on their posts.

First the Bird D'pot portion of this post. It has been raining, so I didn't get out for my weekend ramble. Thus, no new birds. 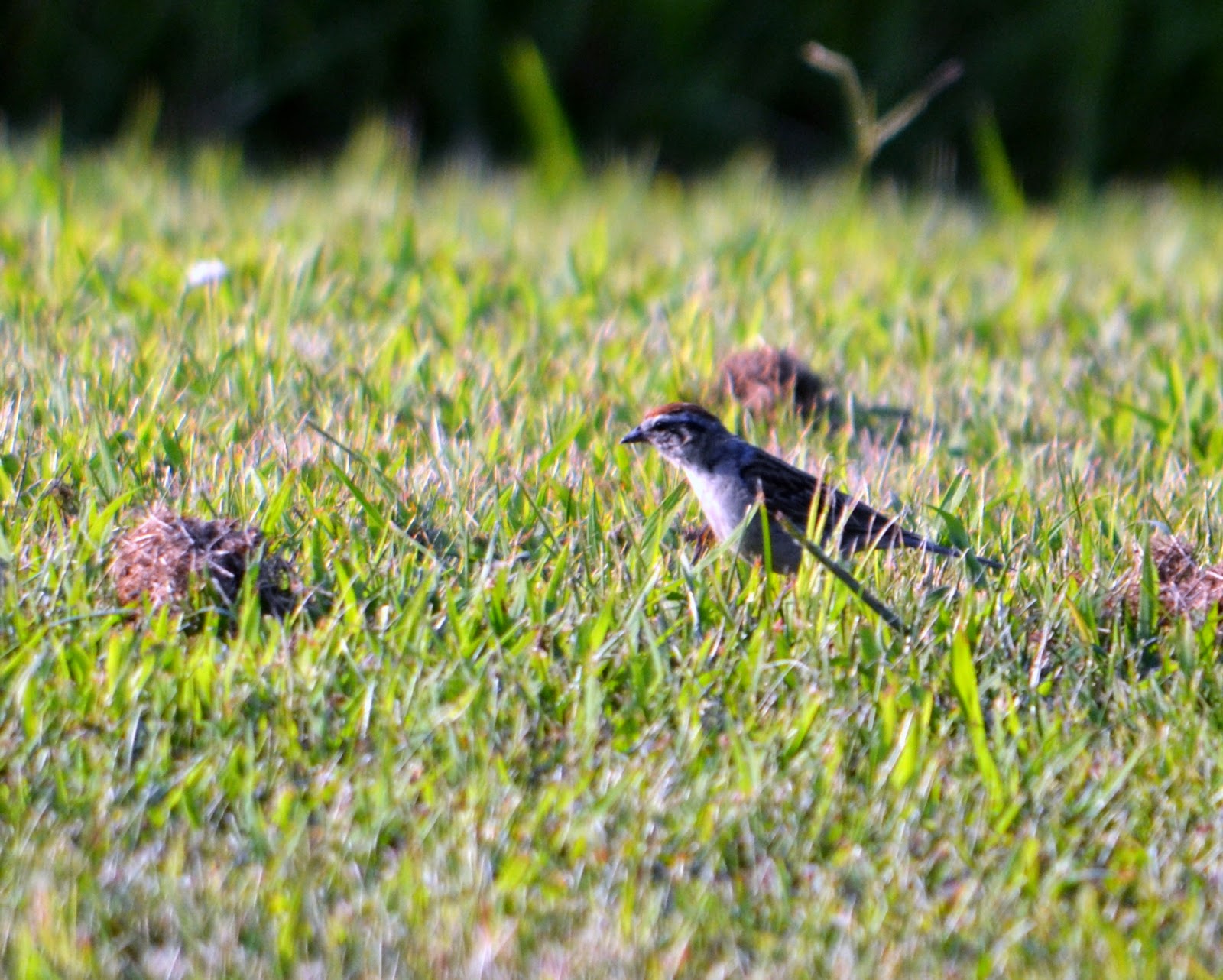 I did have this chipping sparrow left over from a few weeks ago. He was having a run through the grass.

Linking to the Bird D'pot 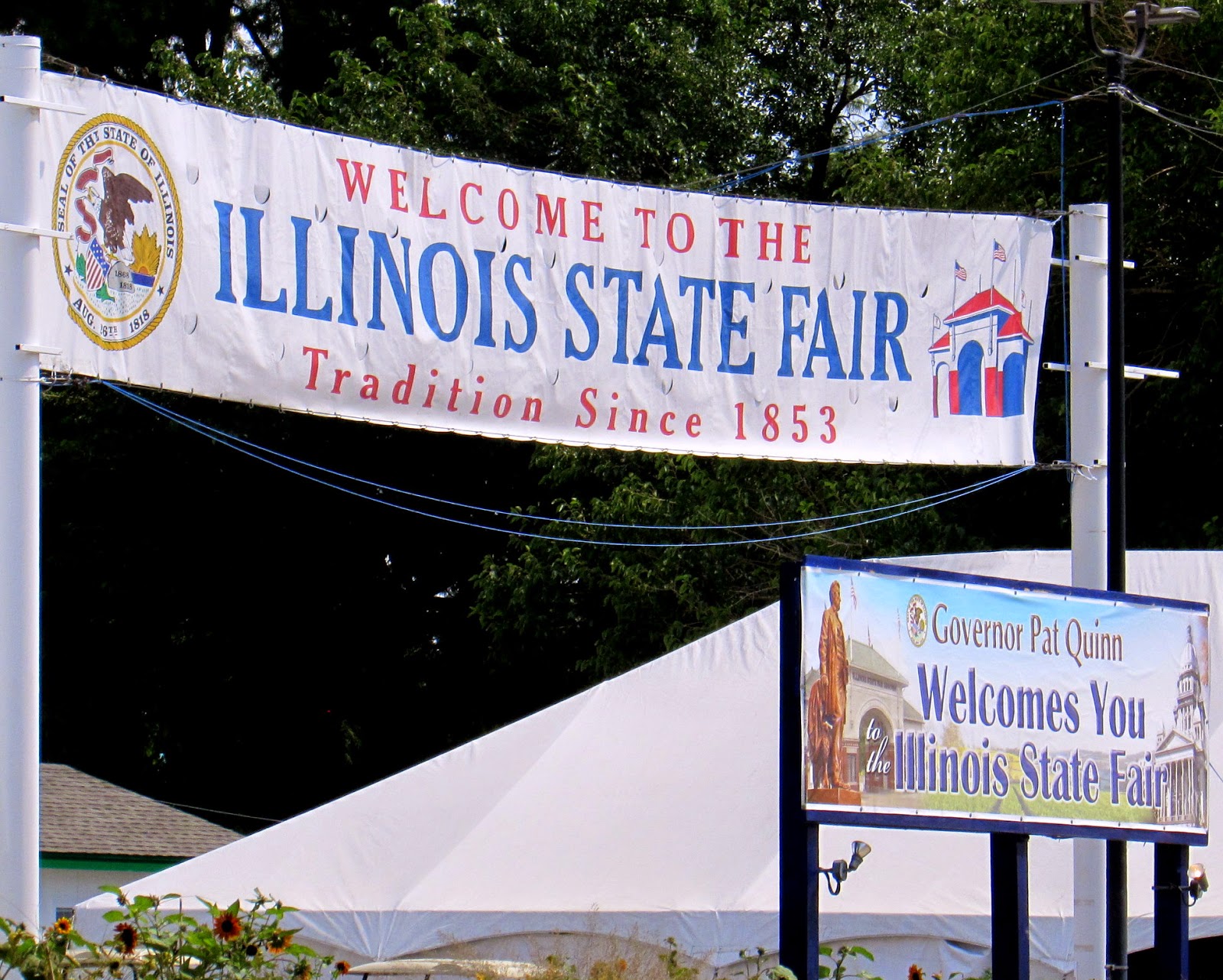 The first Illinois State Fair was celebrated in 1853 in Springfield. In the first year, the admission fee was 25 cents. Last Thursday it cost $14 to get in.

There was a time when the fair was postponed. There was no state fair during the years 1942-1945 because the fairgrounds were used as a U.S. Army Air Force supply depot. Not D'pot, depot. According to one historian, in the fall of 1943 more than 1,000 Chinese military personnel were trained on the grounds.

Interesting facts:
The Illinois State Fair played a key role in the popularization of the corn dog, starting in 1946.

The fair has long been noted for its annual butter cow.  What is a butter cow you ask? Well, it is a life-size cow formed from pure butter applied to an armature by a sculptor wielding an oversized palette knife. Sorry there are no pictures as we didn't find the butter cow. Well, to be honest, we didn't actually look for it. 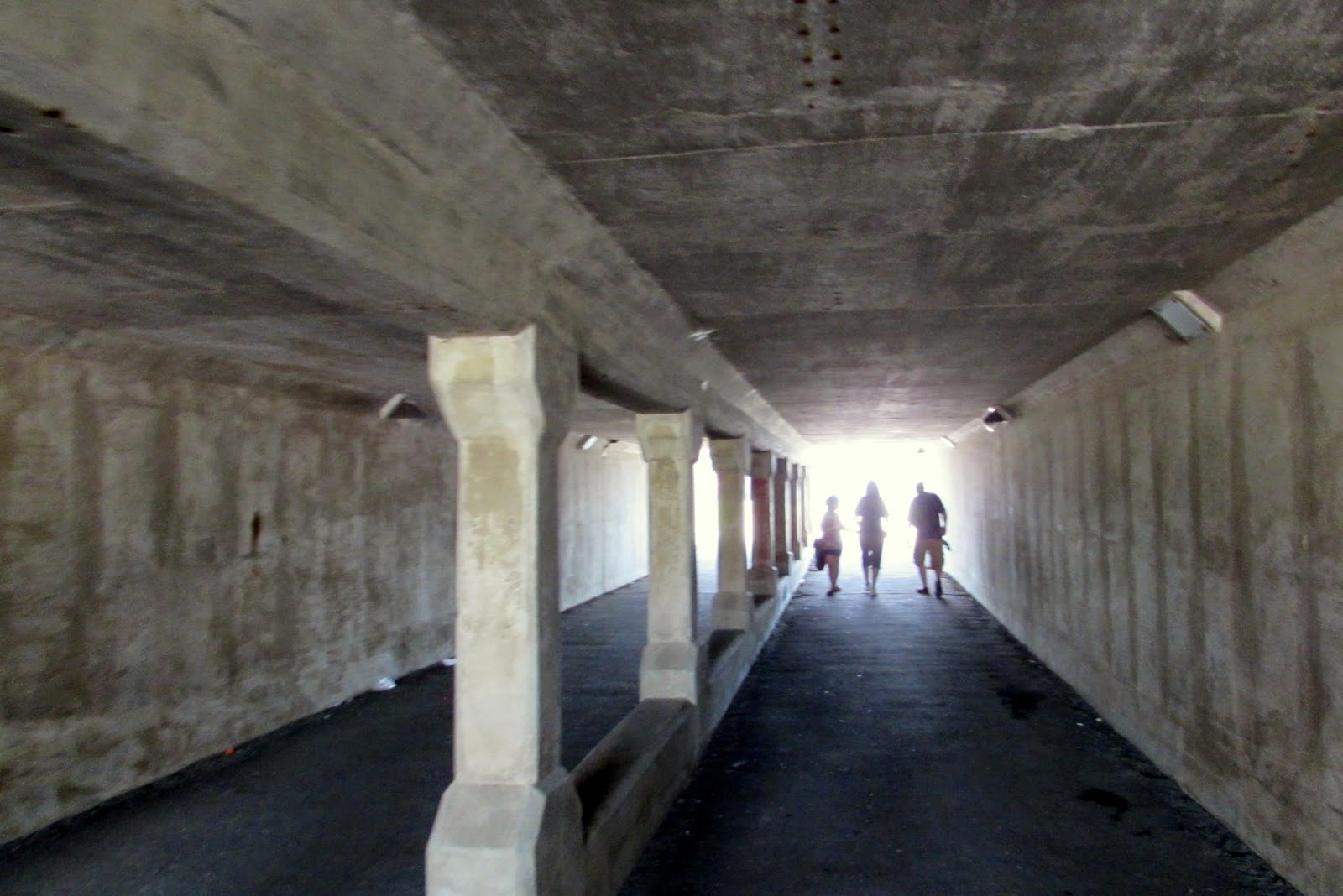 After a mighty long walk from our parking spot, we discovered we had to walk into the light. Which we did with more than a little trepidition. And no, there were no trumpets or angels waiting to escort us onto the fair grounds. 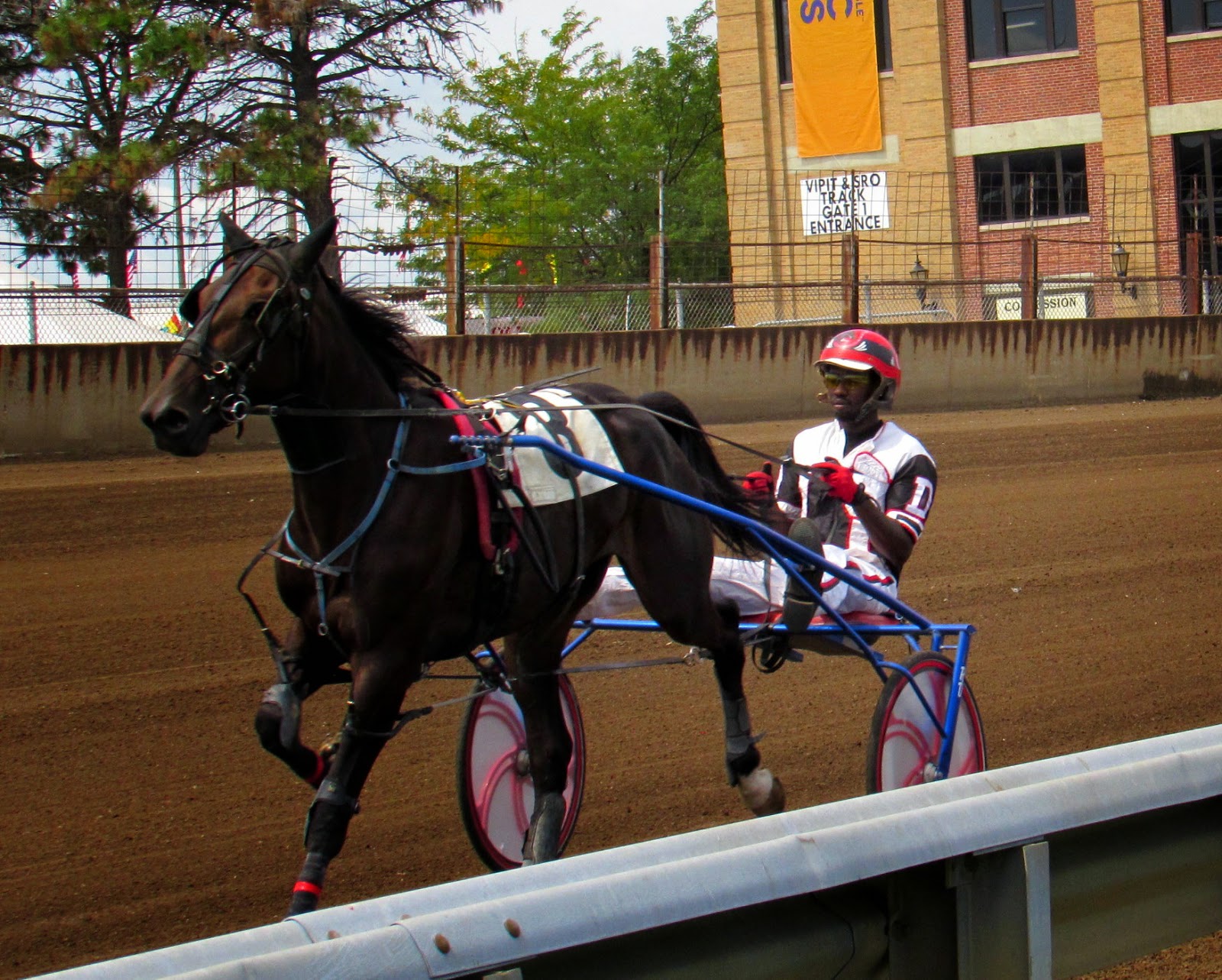 But there were beautiful horses running in front of sulky carts. 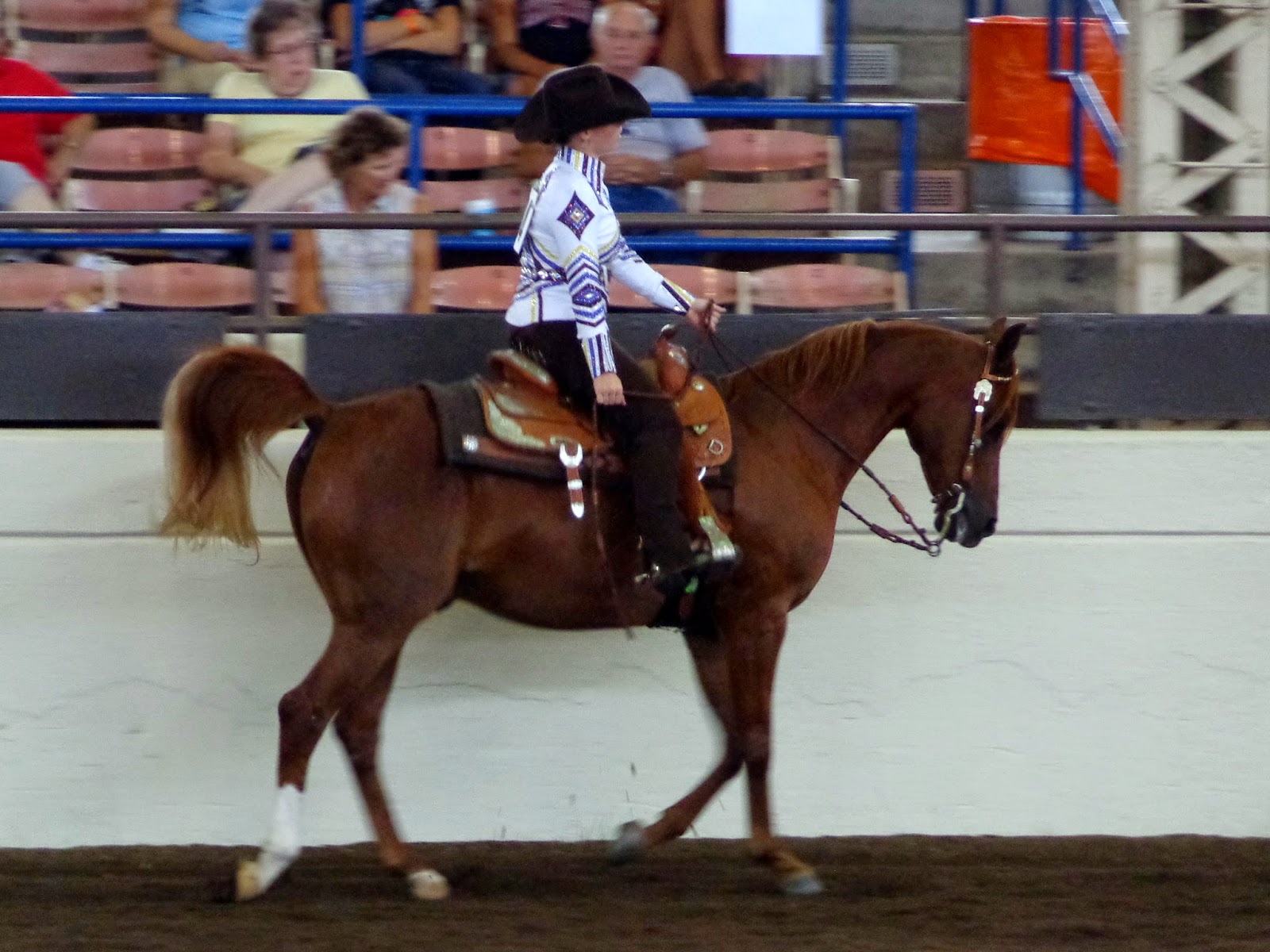 Inside the arena there were horses showing off their many talents. This one got honerable mention. The blue ribbon winner's pic turned out too blurry to post. 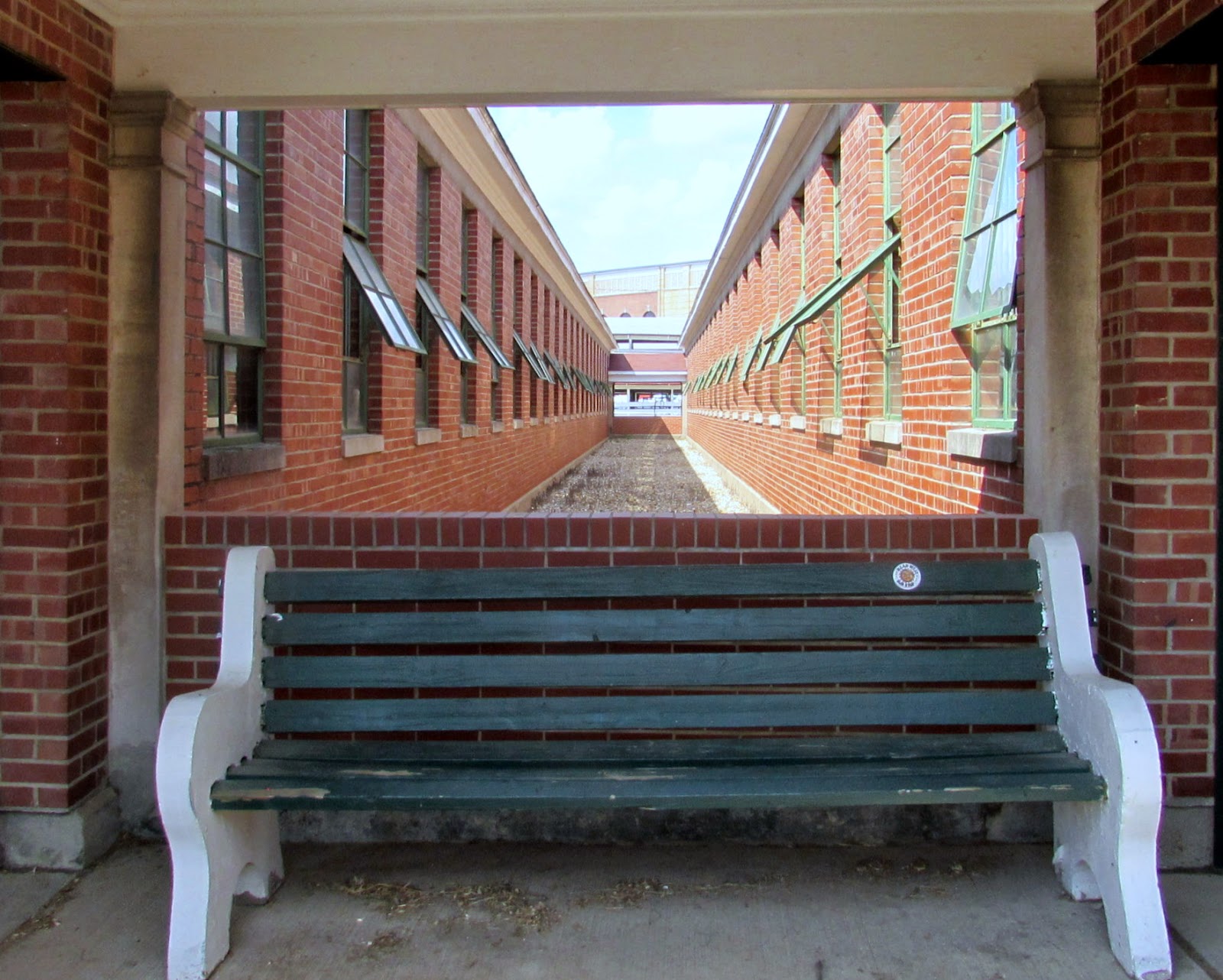 After much walking around, viewing the art exhibits, western jewelry and touring the livestock barns, it was time for some refreshment and a rest. We passed on the gator-on-a-stick, opting for a more traditional rib eye steak sandwich and lemon-orange shakeups. We enjoyed our fair food while sitting on this old bench in the shade of the horse barns. Good thing we didn't find horse barn fragrance offensive.
Of course later on we had dessert in the form of an ice cream cone. We passed on the fried candy bars, but we were approached by an older lady looking for the fried butter stand. Fried butter? It sounds totally disgusting, but it must be an interesting project to actually get it fried. We didn't go looking for any fried butter! I'm assuming it was somewhere near that butter cow.
The Illinois state fair isn't nearly as big as the Texas state fair, but it was okay as fairs go.
This week's Rubbish Tuesday post will have more pics from the fair. Can't wait can you?