Mural in downtown Mattoon, Illinois. A mix of old and new. 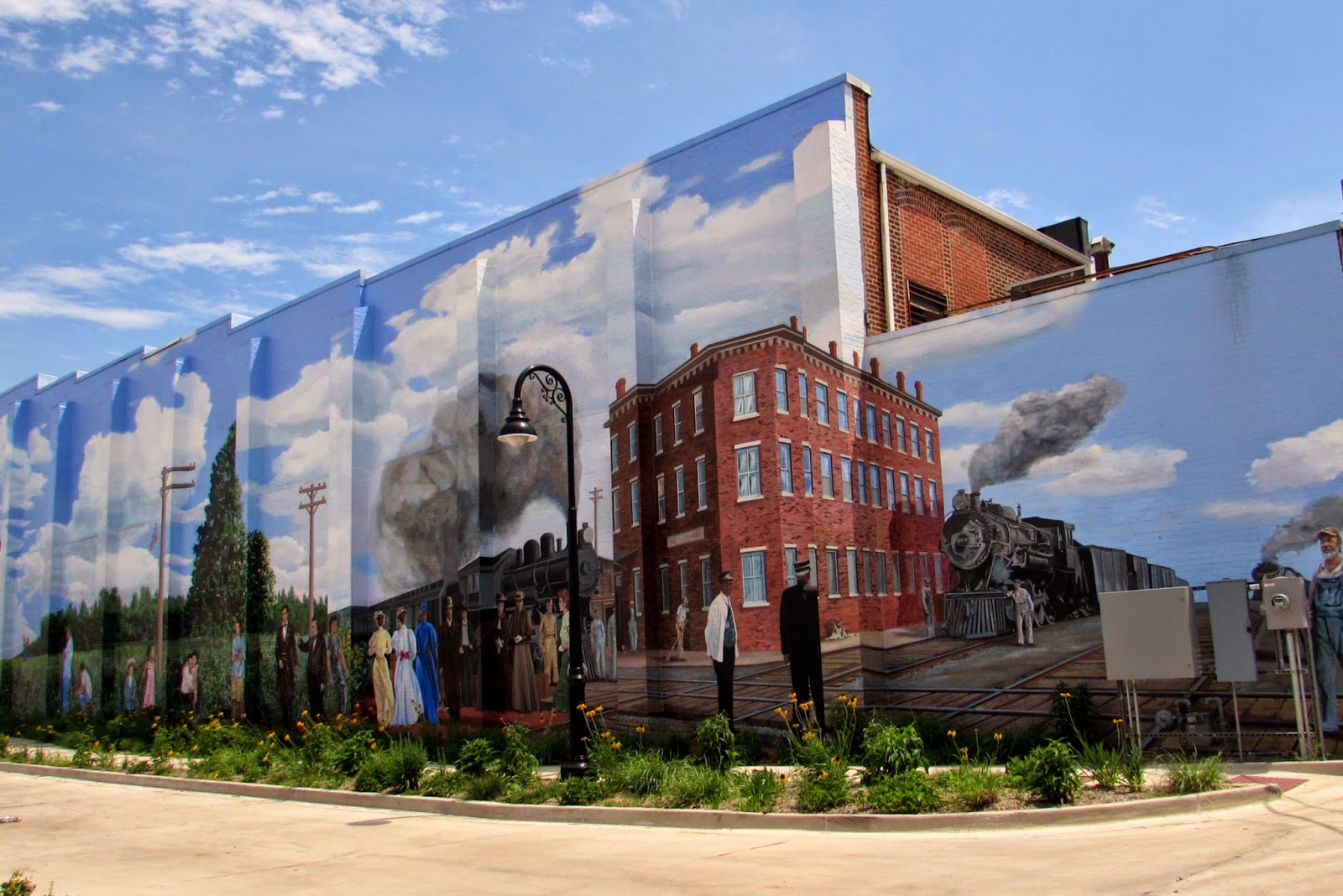 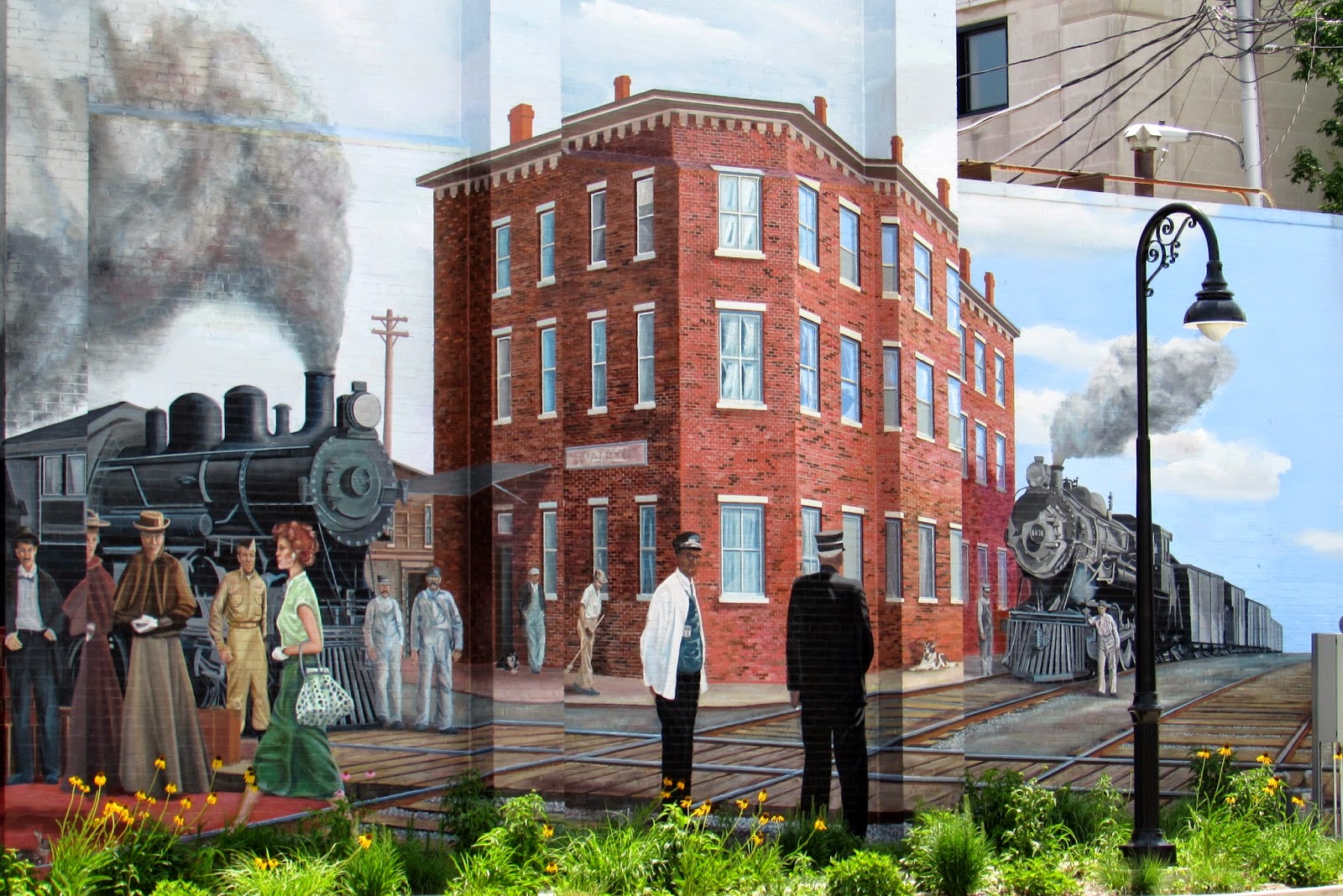 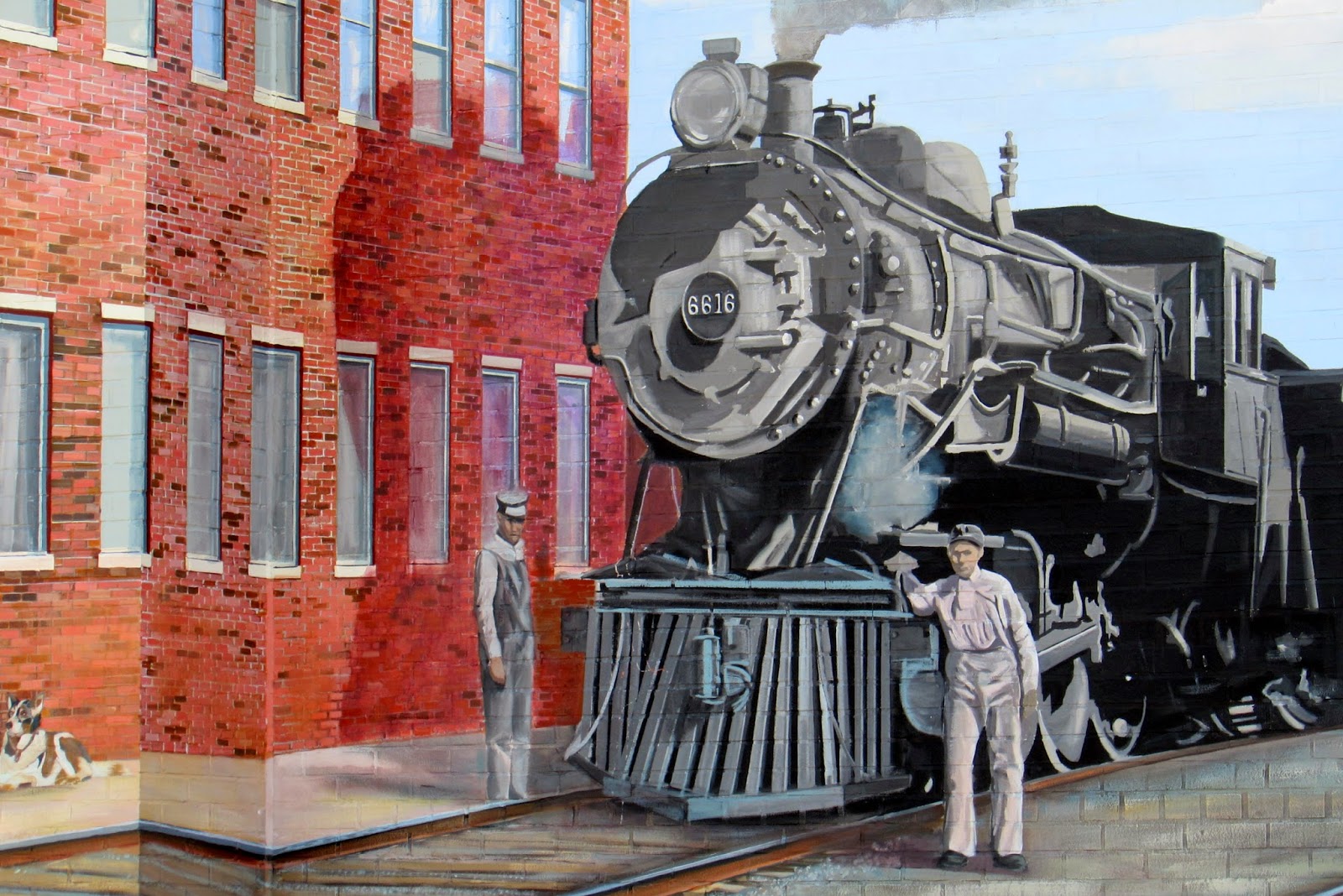 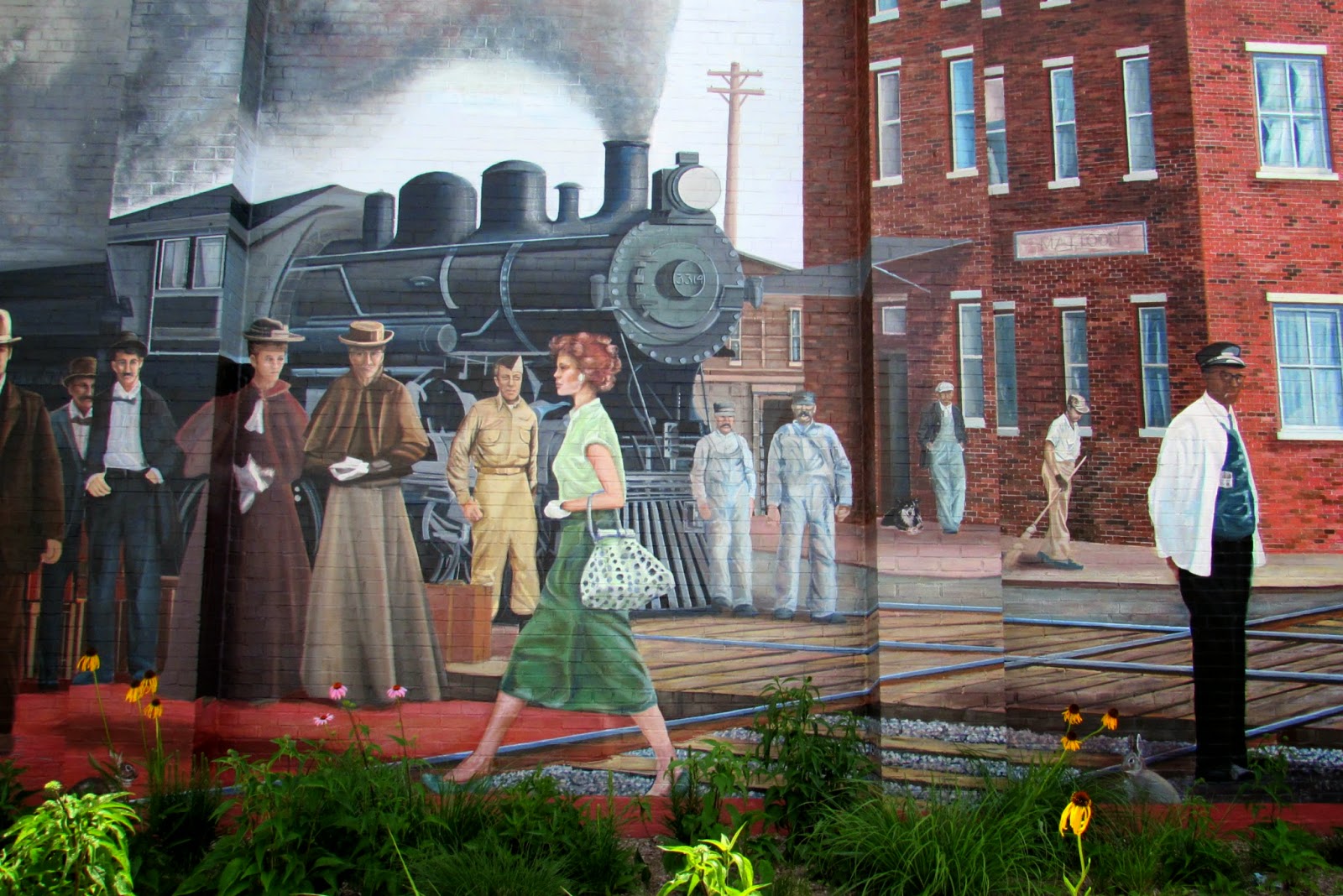 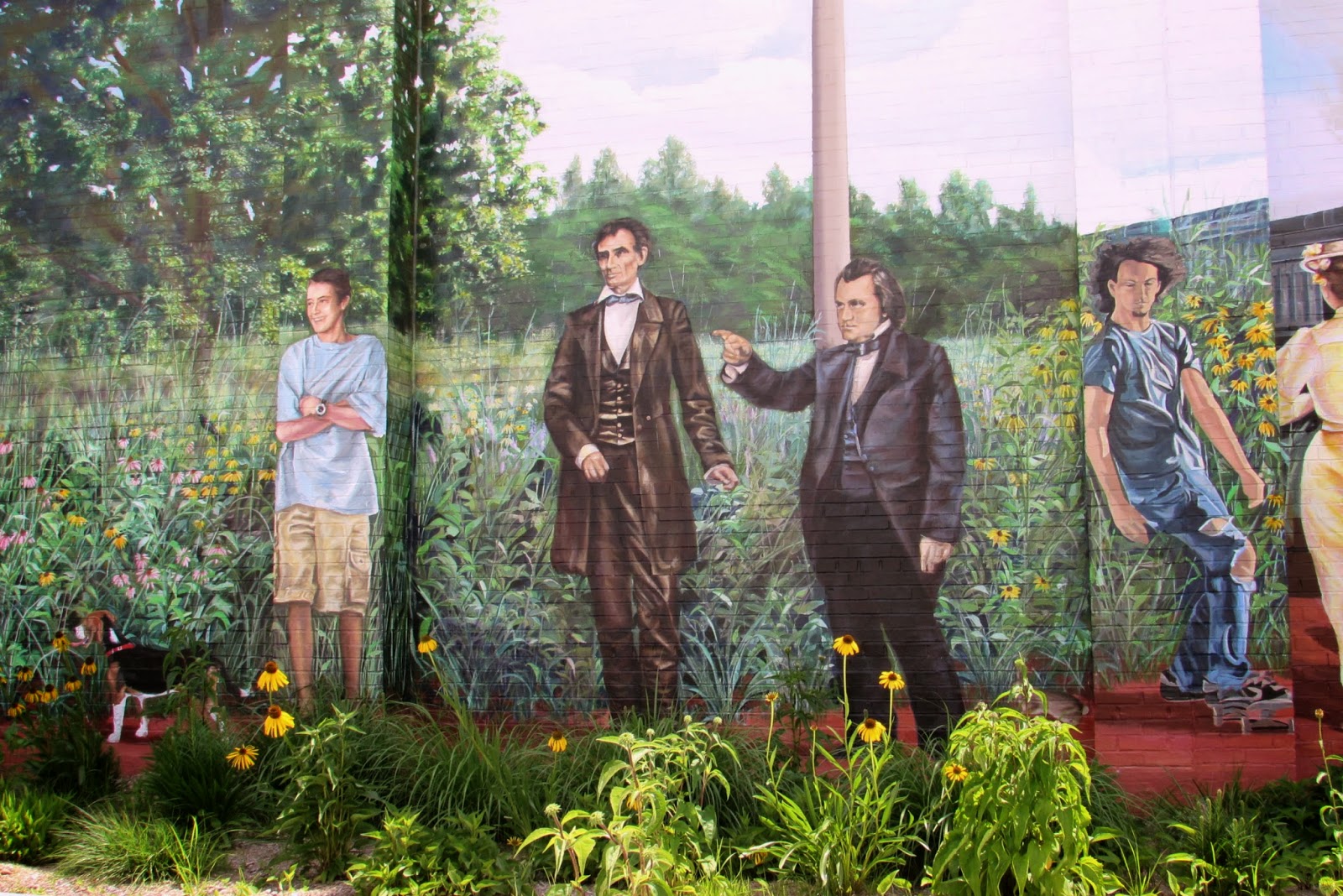 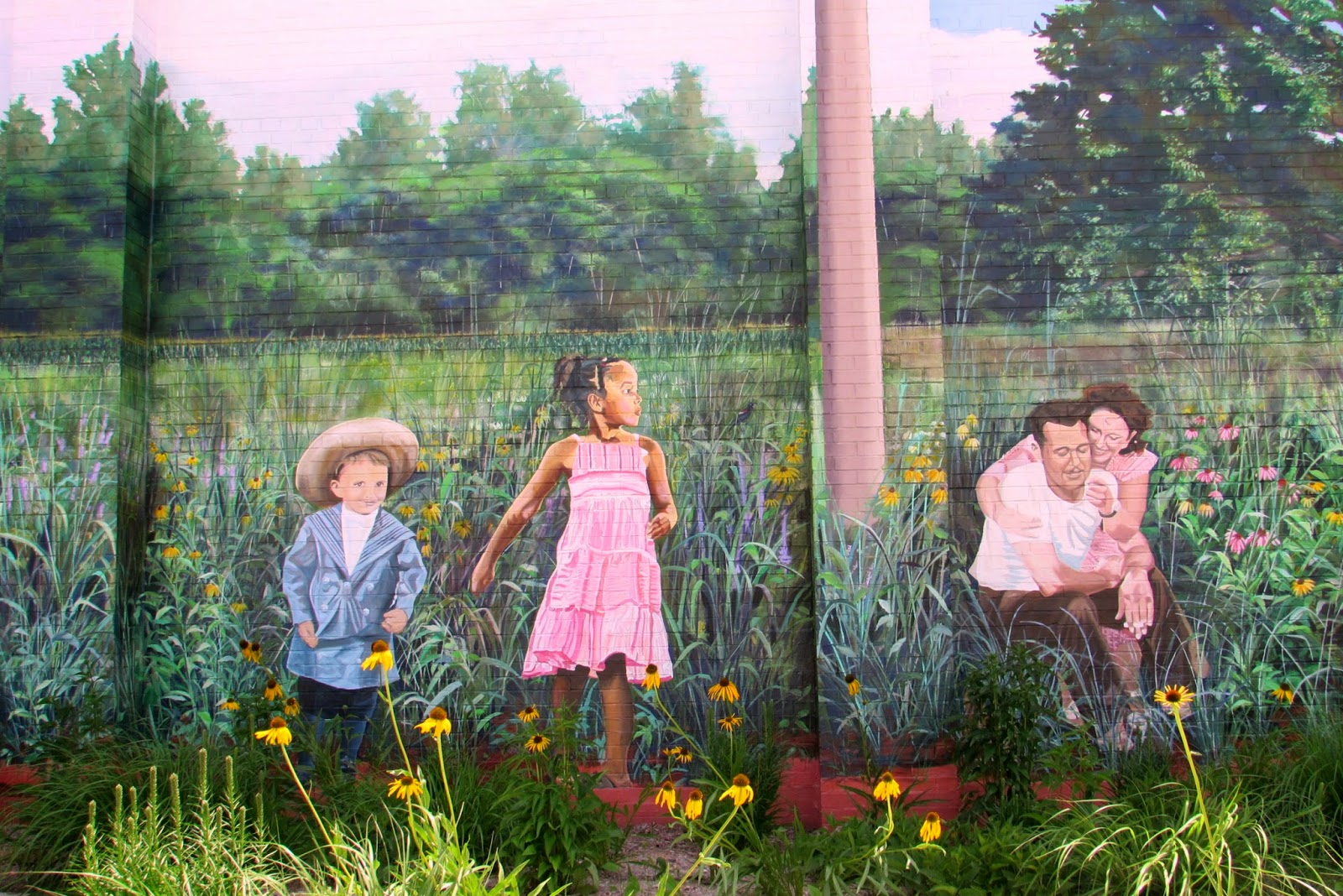 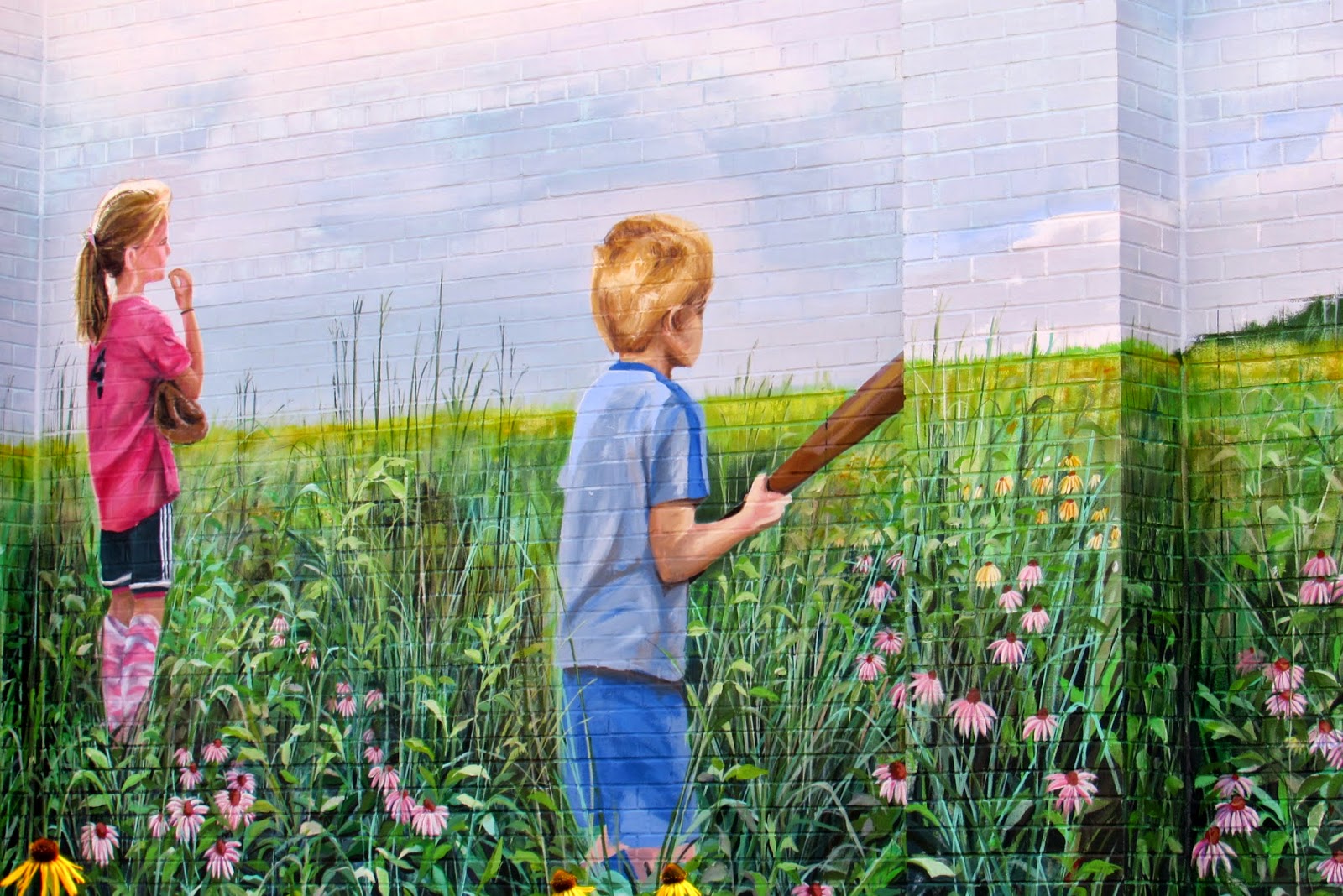 I'm terribly behind on visiting and commenting. It has been a long week both work days and evenings. Plus, Wednesday night I had no sleep. Autistic grandson went missing. I've never been so frightened in my life. The police were wonderful. He was found about 3 hours later. Seems he decided to go for a late night jog without telling anyone. He couldn't understand what all the fuss was about.

Email ThisBlogThis!Share to TwitterShare to FacebookShare to Pinterest
Labels: mural

Last night was our local Camera Club meeting. The assignment was American Flag - tattered and torn.
Neither Hubs nor I were inspired by the topic. We have done flags, patriotic, or a similar topic many times before. We decided to go to the meeting, but not bring a picture for the contest, unless we found something we liked. I mean how many angles can you take a picture of a flag and make it interesting? Not many. They all end up looking like—you got it flags.

During last week's ramble, I saw a cool looking barn. Of course I slowed and took a few shots out the car window. Later when I downloaded my pics, I saw somehting amazing. There was a metal flag hanging on the side of the barn—tattered and torn. Now I was excited. So, I jumped in the car and drove back to the barn. I walked up to the house and knocked on the door to ask permission to get a closer shot, but no one was home. So, I had to settle for a long distant shot or risk getting arrested for trespassing. Which wouldn't look good for the Criminal Court Clerk. Below is the pic I entered in the contest. 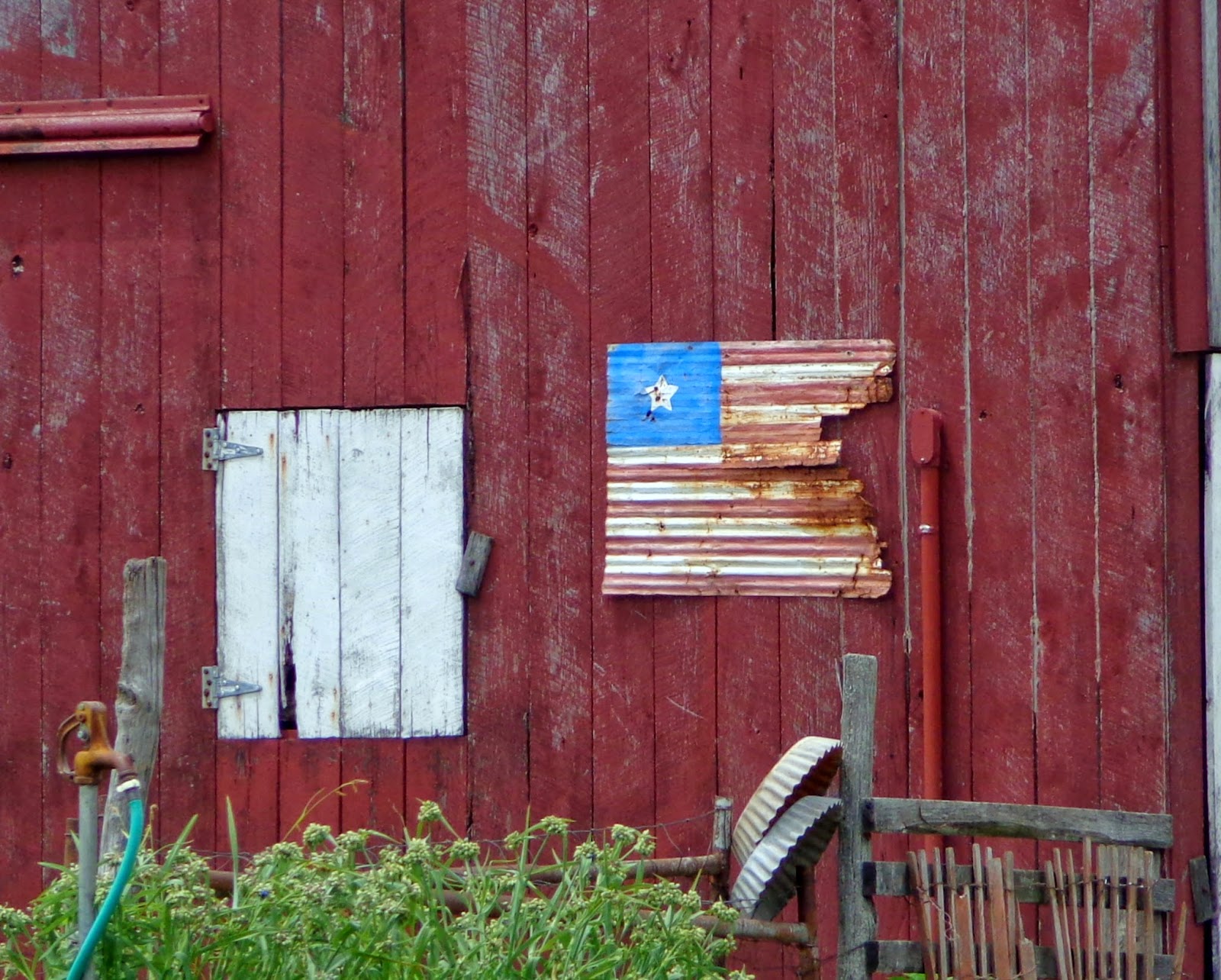 It doesn't have quite enough stars, but I would consider it an American Flag, wouldn't you?

After I found the barn I got excited and located a couple of tattered flags for Hubs. After some convincing he drove off with his camera, after work, the night of camera club. Below is the pic he entered in the contest. 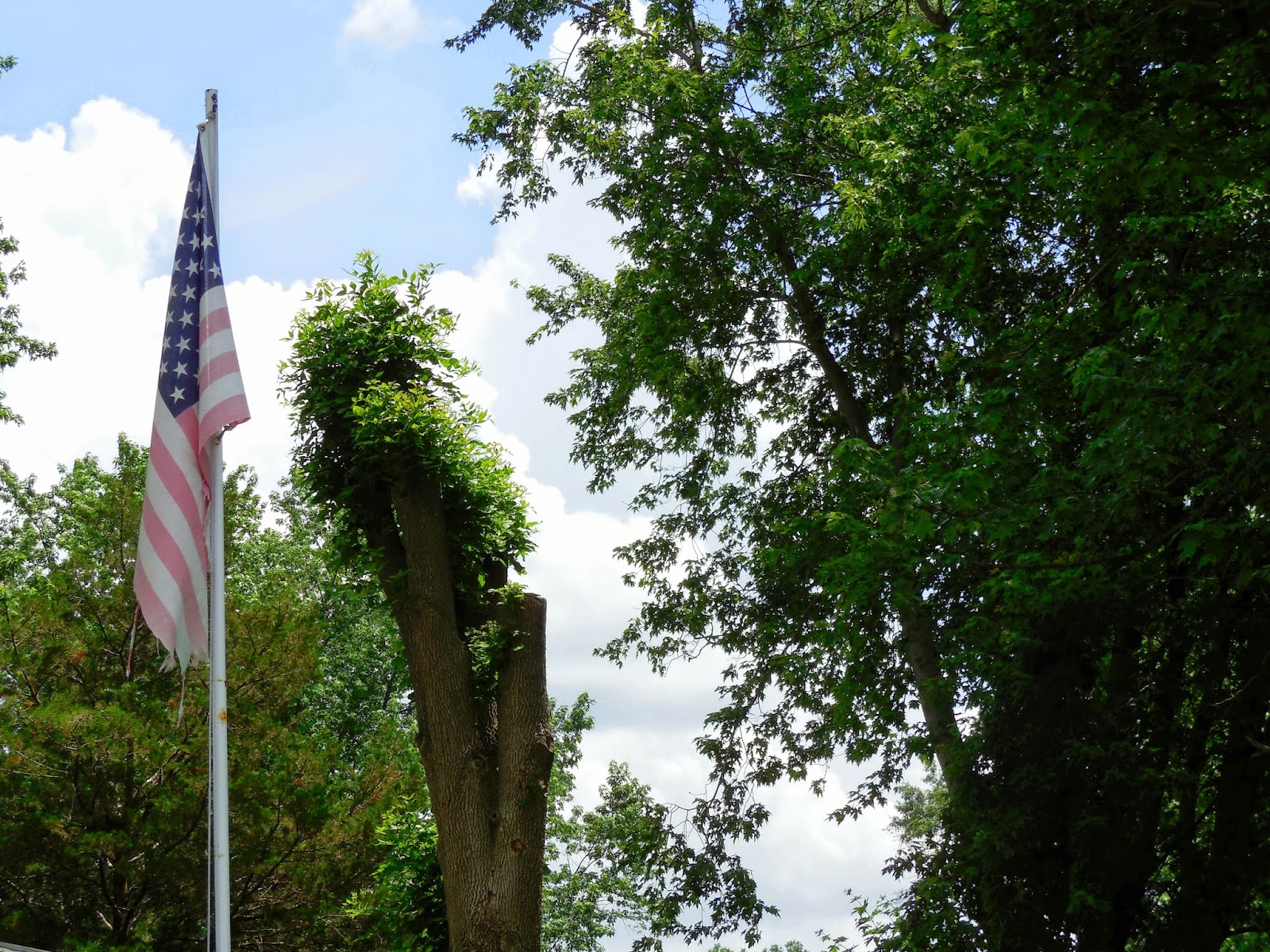 Of course there wasn't a breath of wind, but he got it printed in the nick of time. I really like the way he positioned the flag with the sky for background and the trees to the side.

How did we fare you ask?

The barn flag took 1st place. The limp flag took 3rd. I'm thinking everyone else might be a little tired of flags, too.

Next month is sunrise/sunset. 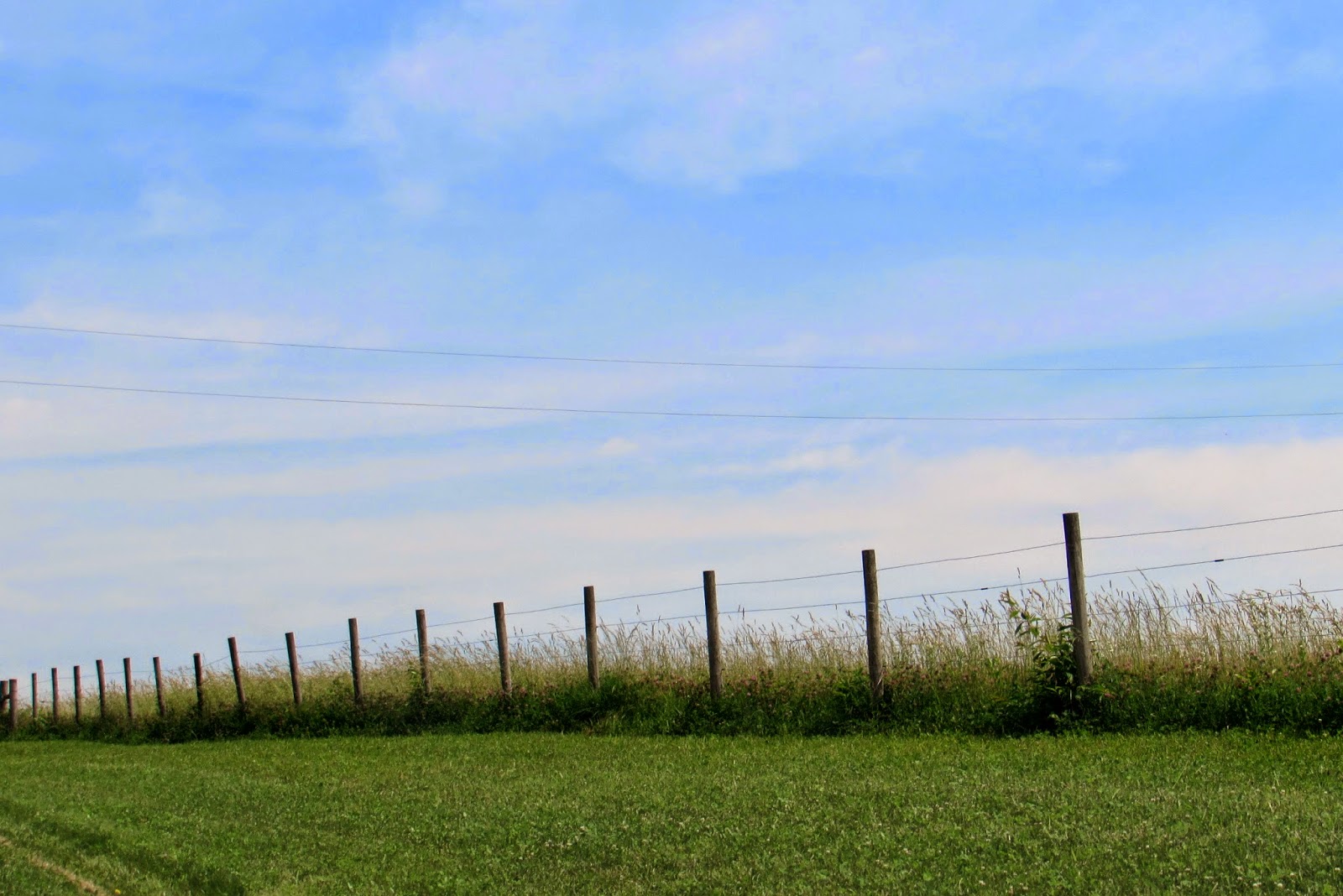 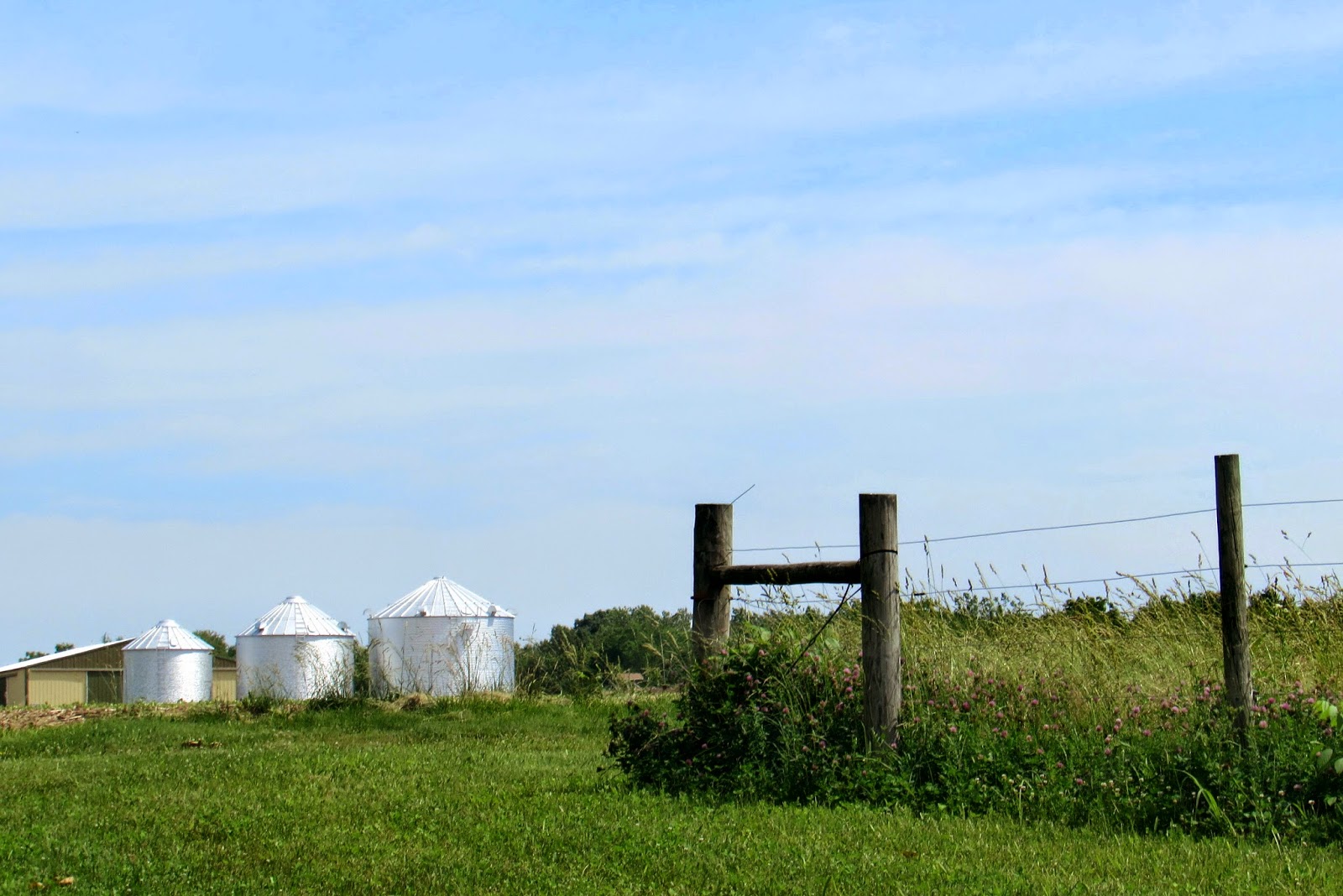 Linking to Good Fences
Posted by Roan at 10:03 PM 28 comments

The Red-Wings start yelling at me the minute I get out of the truck at the garden. The only difference this day was that Mr. was nowhere to be seen, this time it was just Mrs. 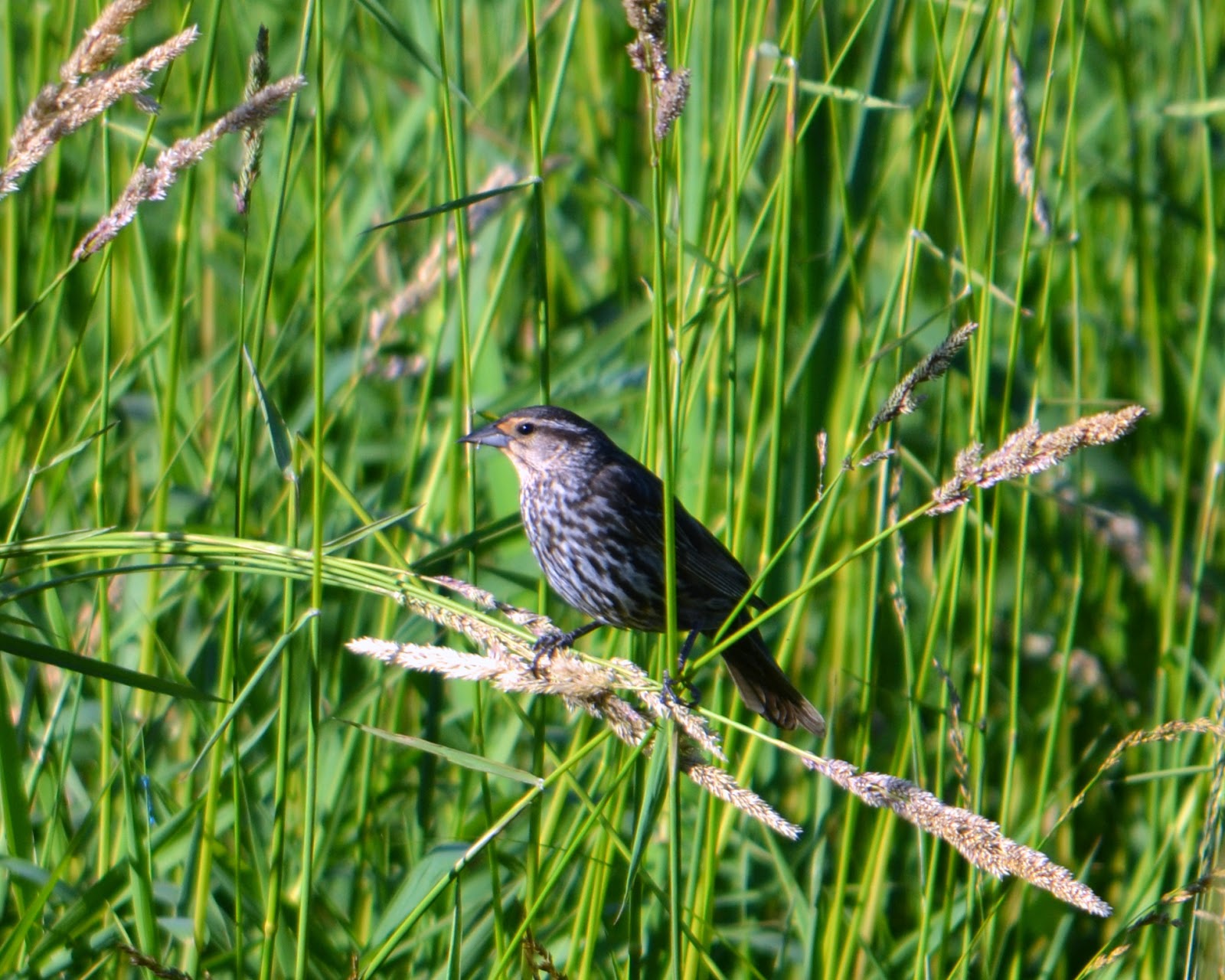 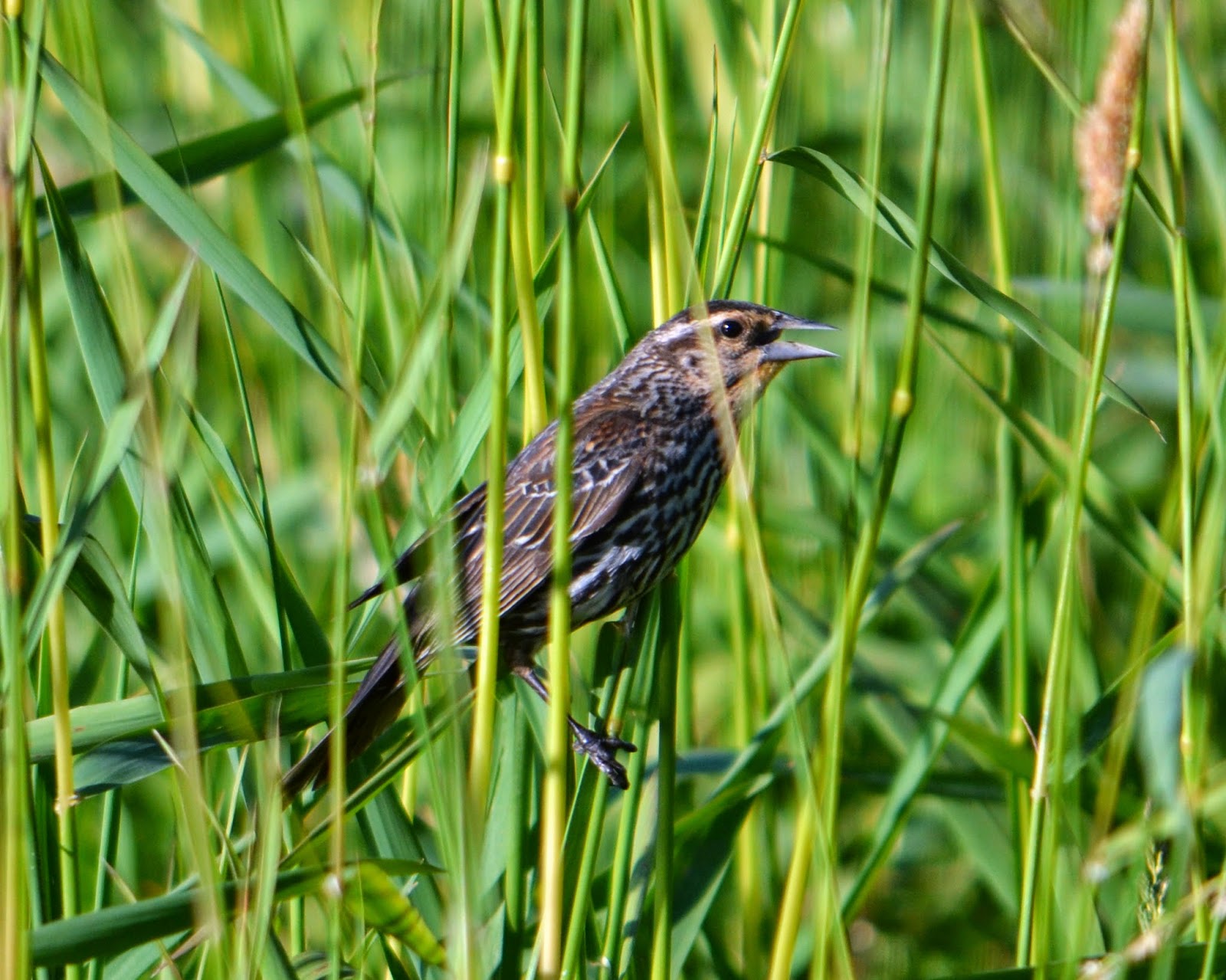 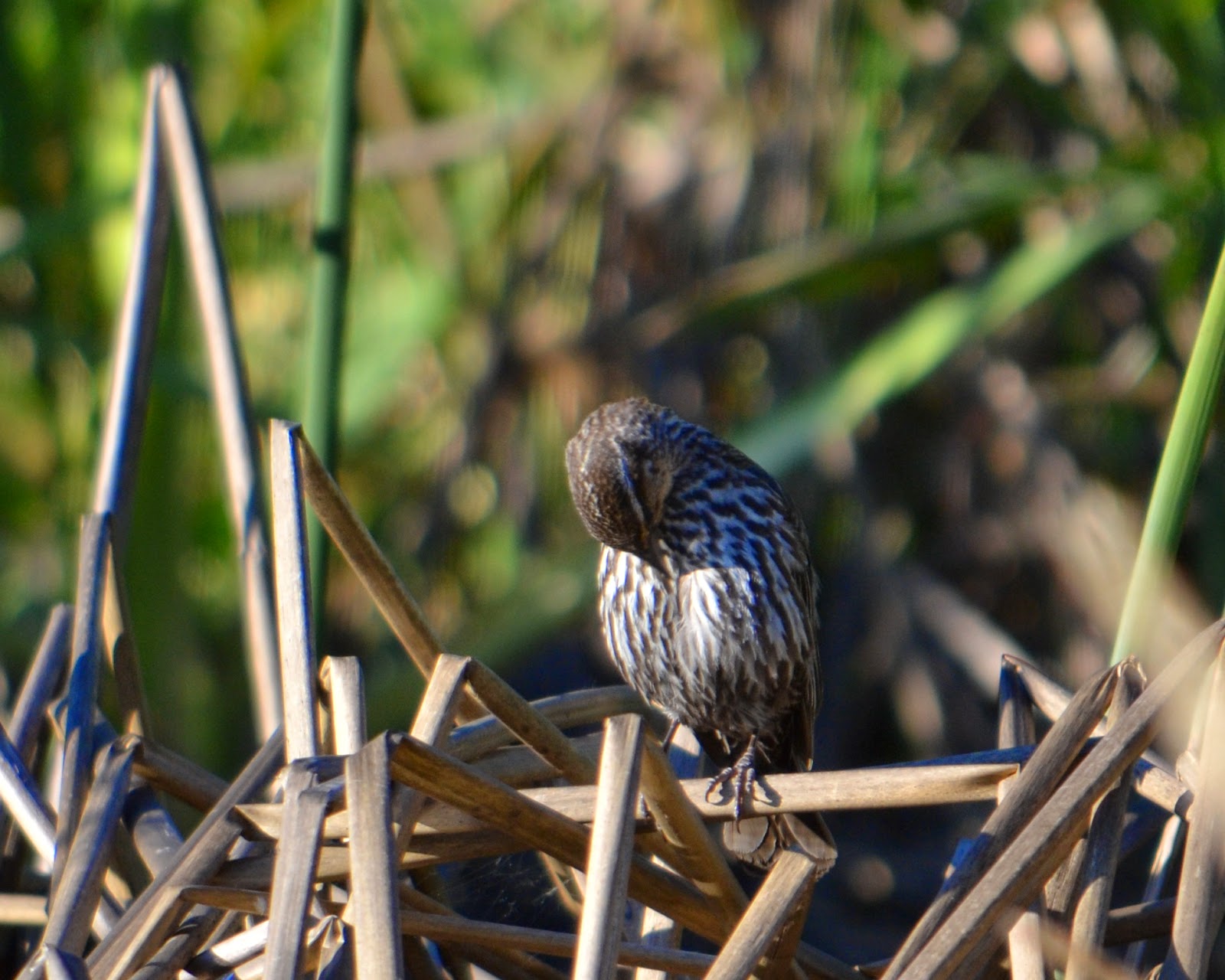 Guess she was distracted by an itch.

1. Since you weren't Hodgepodging last Wednesday, how did you pass the time?
Working extra hours at my day job. Missed the Hodge, though.

2. What's the first word that comes to mind when I say marriage? Yes, one word.
Compromise.

3. Summer officially arrives in the Northern hemishpere later this week. Does it feel like summer where you live? Describe your idea of the perfect summer day.
Yesterday is the first day we turned on the air conditioner. Now it feels like summer. My idea of a perfect summer day is a cold glass of ice tea, a good book, and a rocking chair on the front porch.

4. "Deep summer is when laziness finds respectability."(Sam Keen) Is laziness ever respectable? Do you have a lazy summer planned, or something semi-ambitious?
See above.

5. Past or present, who's your favorite television dad? Why is he a favorite? Is he anything like your own dad?
Andy Taylor. He was an understanding father who knew how to guide his son with kindness. No comparison.

6. June 18th is International Picnic Day...share a favorite picnic memory.
Not too long after we moved from the frigid north to Dallas, we loaded up the picnic basket and drove out to the lake. It was December.

7. The travel site Trip Advisor lists the top five islands in the world for 2014 as- Ambergris Caye in Belize Cayes, Providenciales in Turks and Caicos, Bora Bora in French Polynesia, Marco Island Florida, and Lewis and Harris in The Outer Hebrides (Scotland). Have you been to any of these? Of those listed (and if price were not a factor) which would you most like to book for a holiday?
I would have to pick Marco Island Florida. Why? It would be a shorter flight. Even though I logged a lot of air time during my last job, I no longer like to spend time on airplanes.

8. Insert your own random thought here.
I woke up at 4:15 this morning. I'm too tired for random thoughts about anything other than my pillow, which is currently calling my name. Can you hear it? 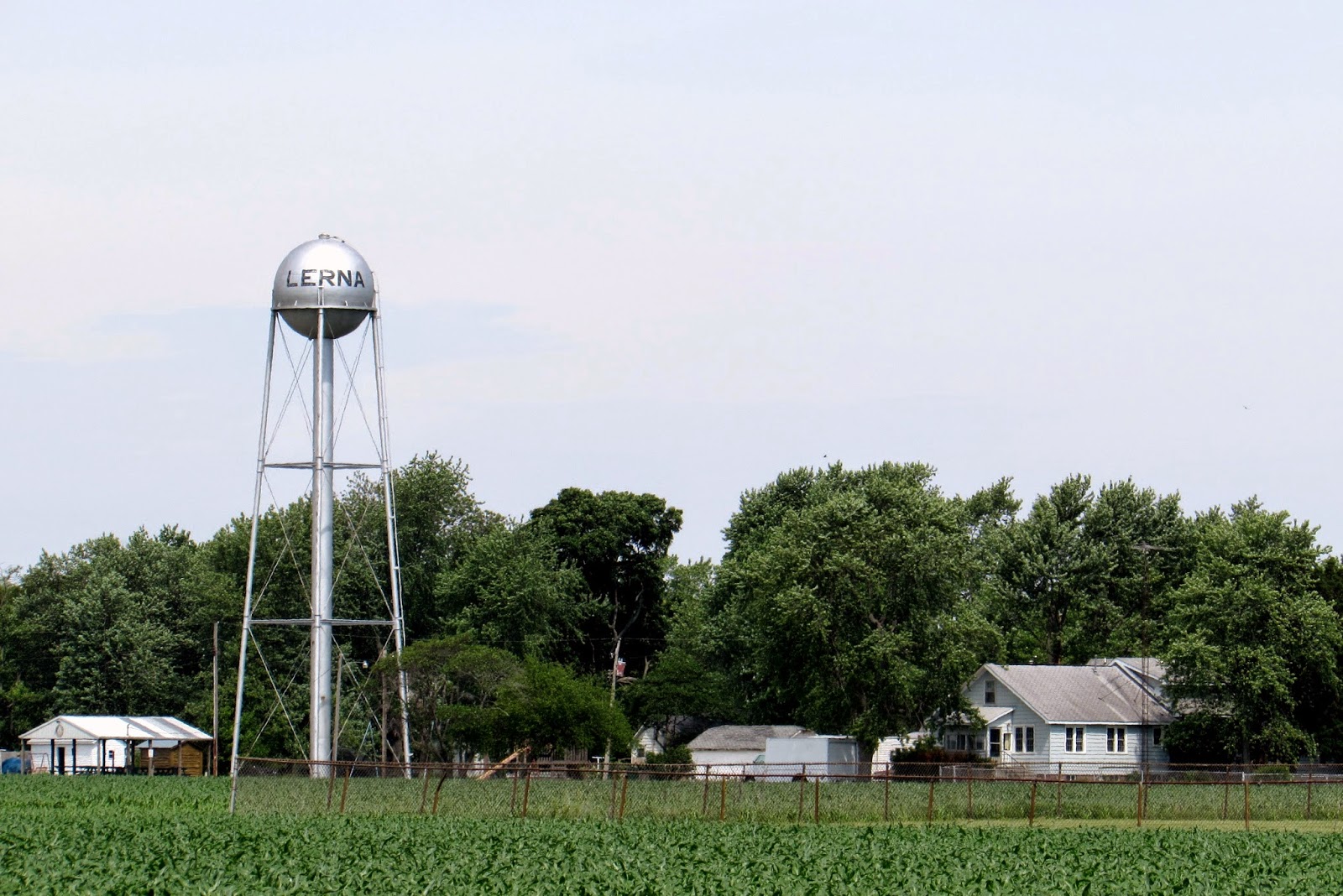 This is the very old water tower. It's been the same for as long as I can remember and I'm older than dirt. 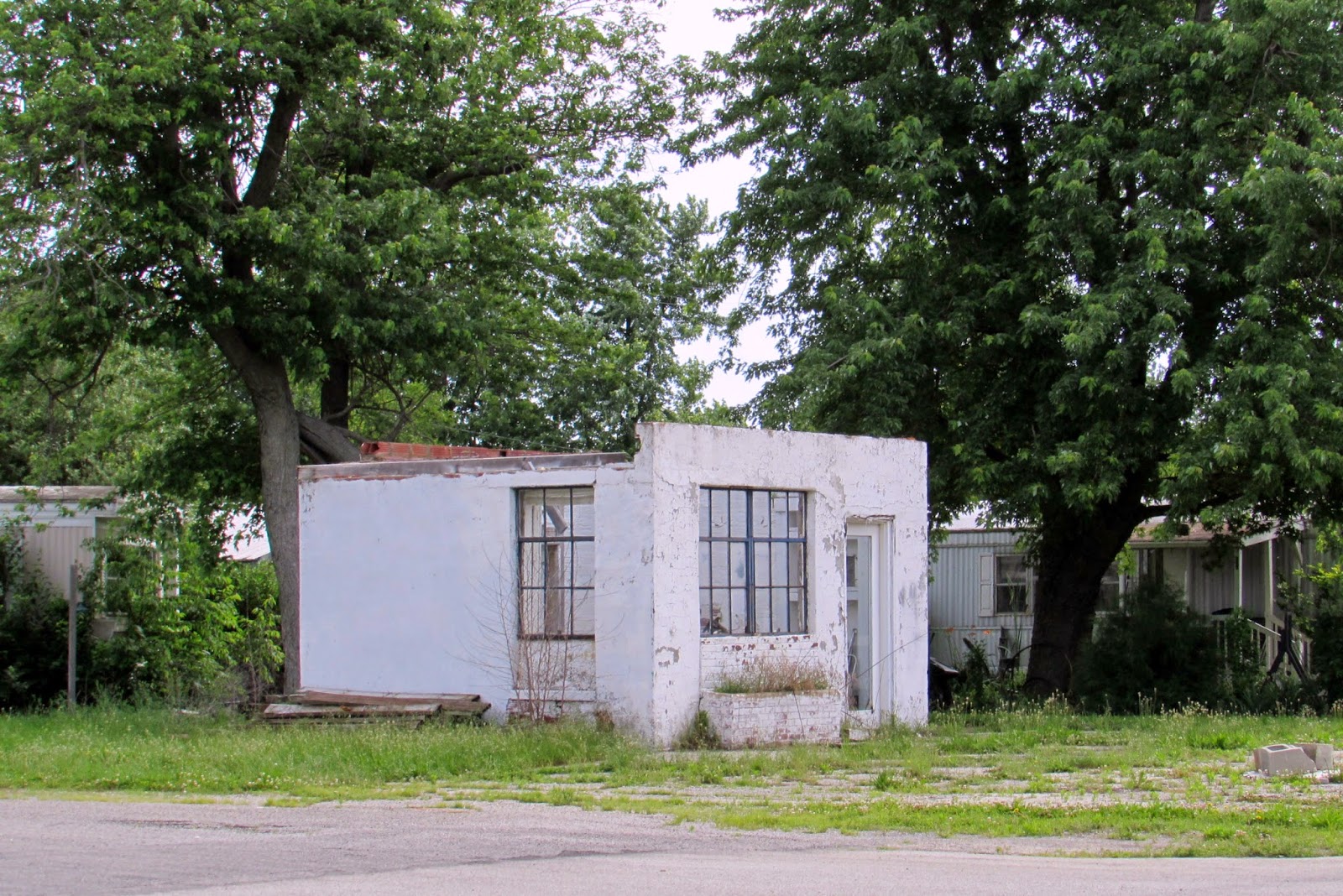 This was once a gas station in the heart of downtown. Not much left these days. 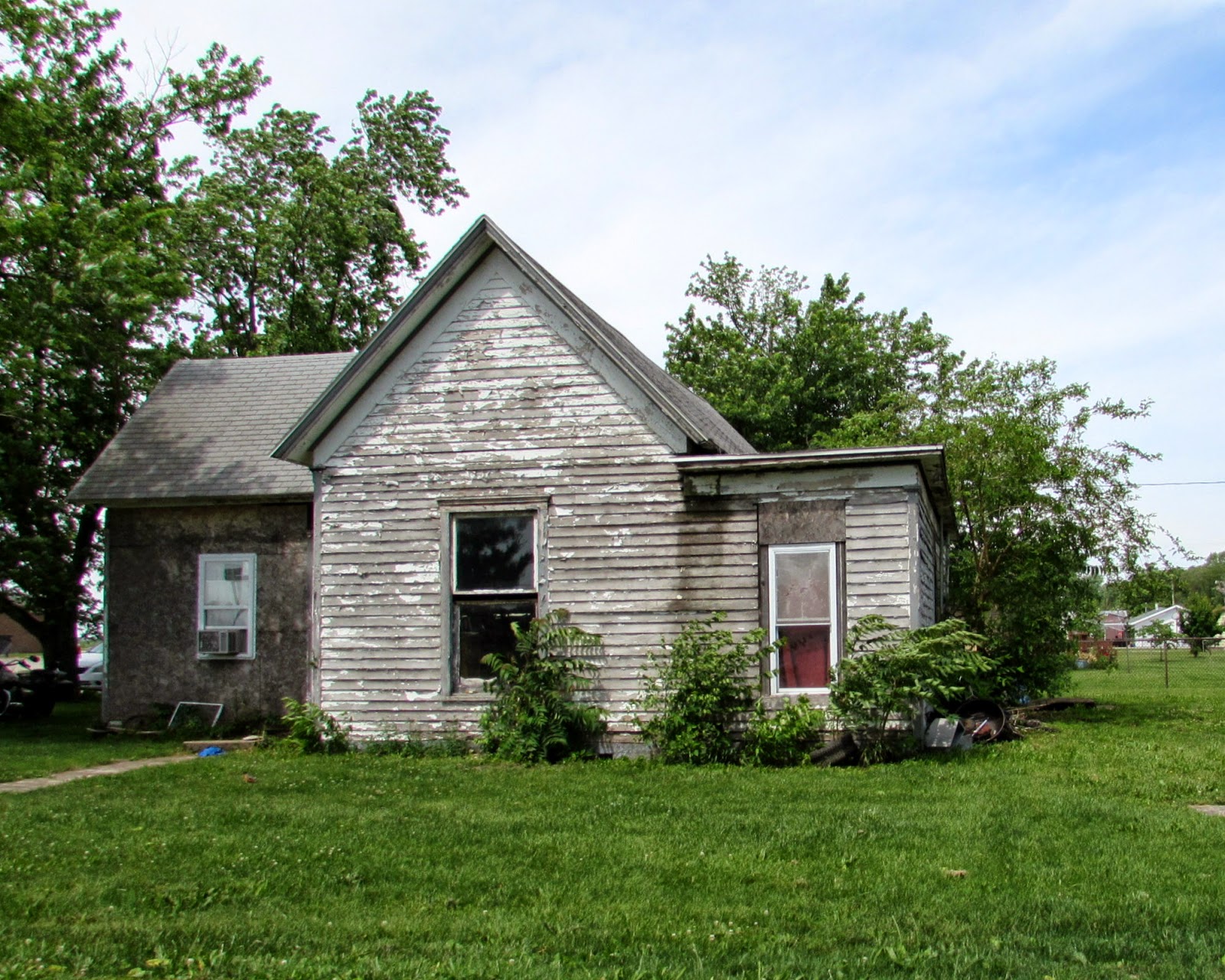 This is one of the many houses needing a little TLC... 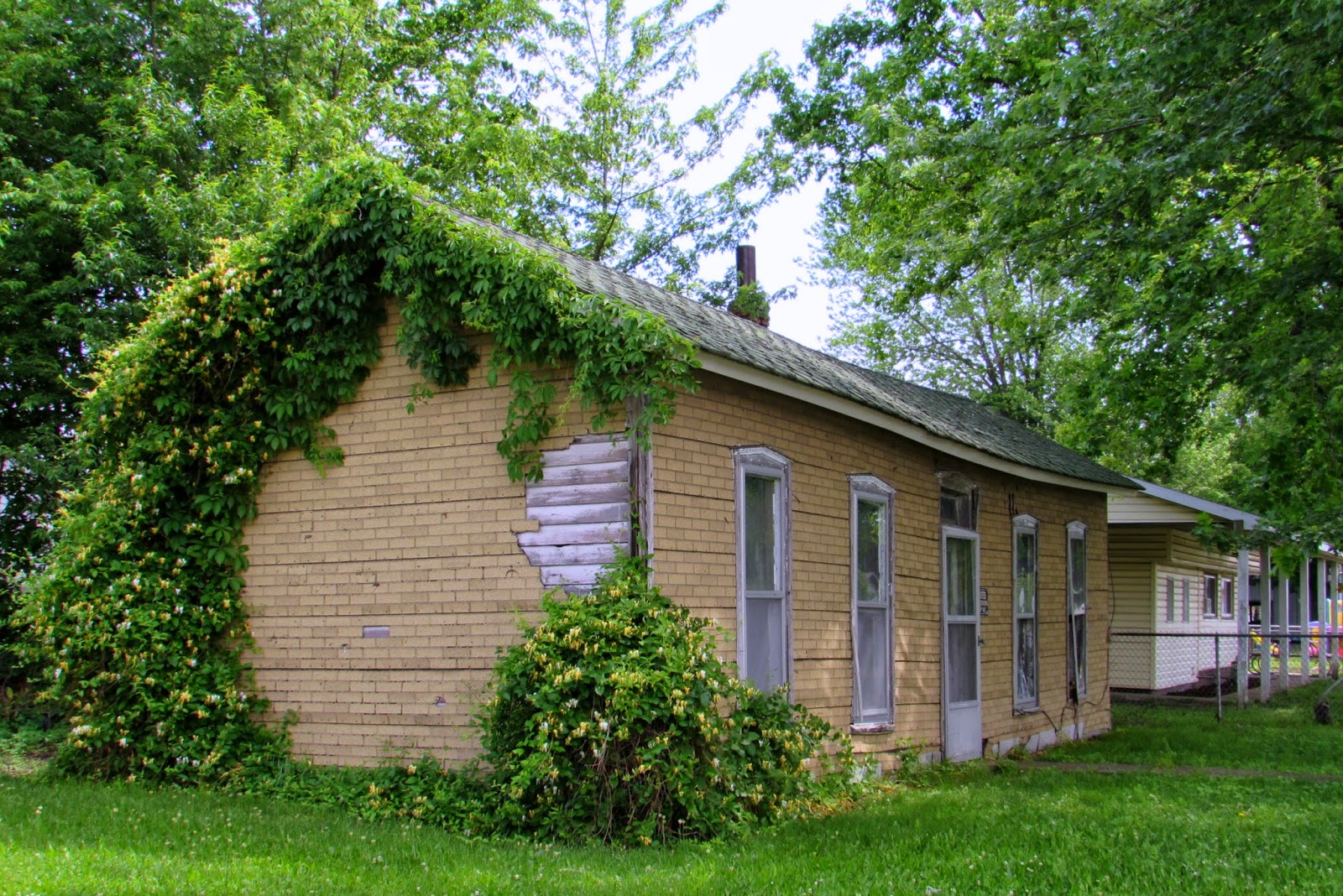 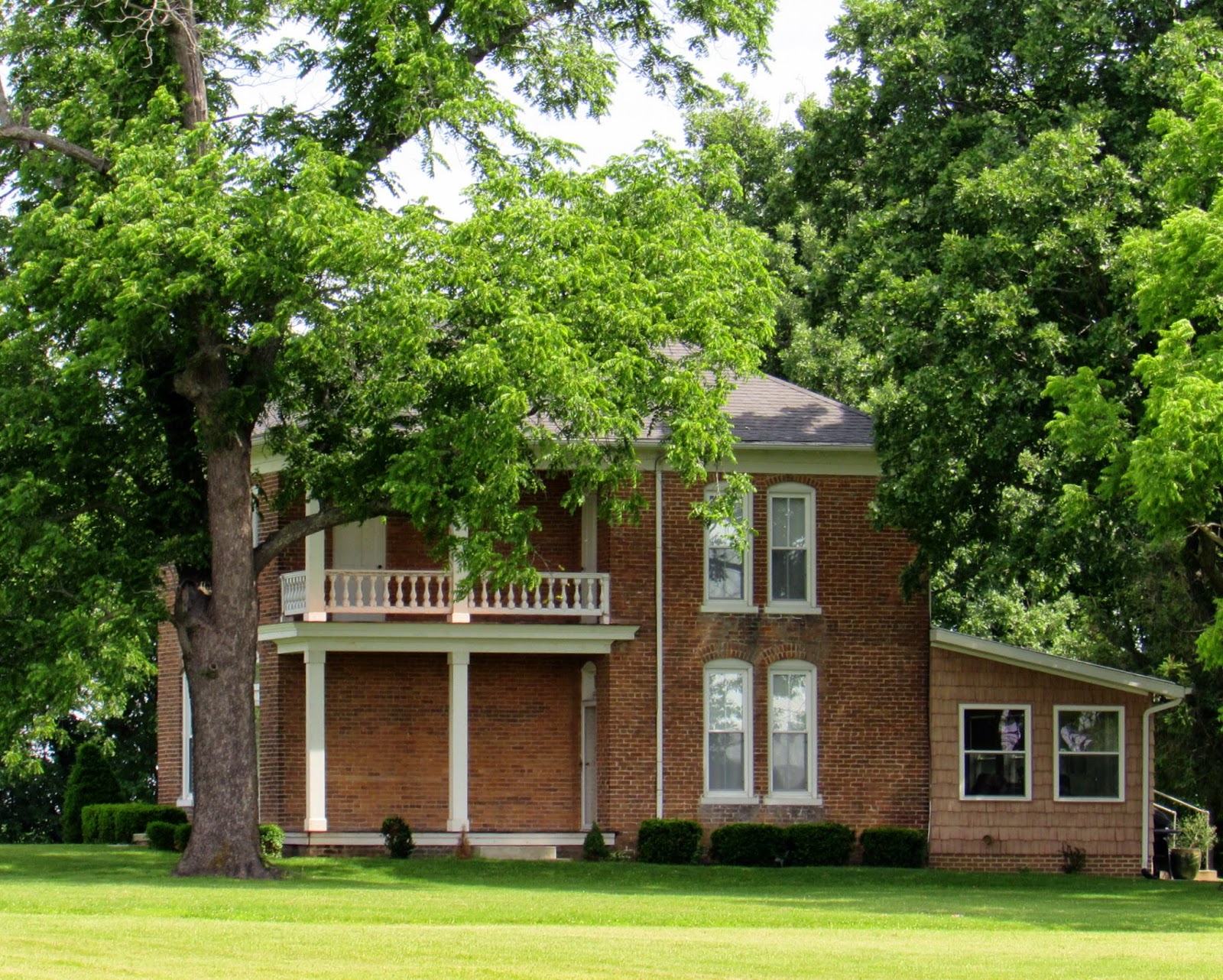 This house is on a farm about a mile outside of Lerna. It once was falling down and in dire need of repairs. Someone brought it back to lilfe.


1. Link to a post featuring photos of something old.
2. Link back to Rubbish by Roan in your post.


3. As time allows, visit other participants and comment on their posts.

Camera Club's assignment for June is, American Flag—tattered and torn. Since I don't have a picture, Fergus and i went for another ramble through the countryside. I did find a flag, but I won't post it until after Wednesday in case someone is practicing the art of espionage. 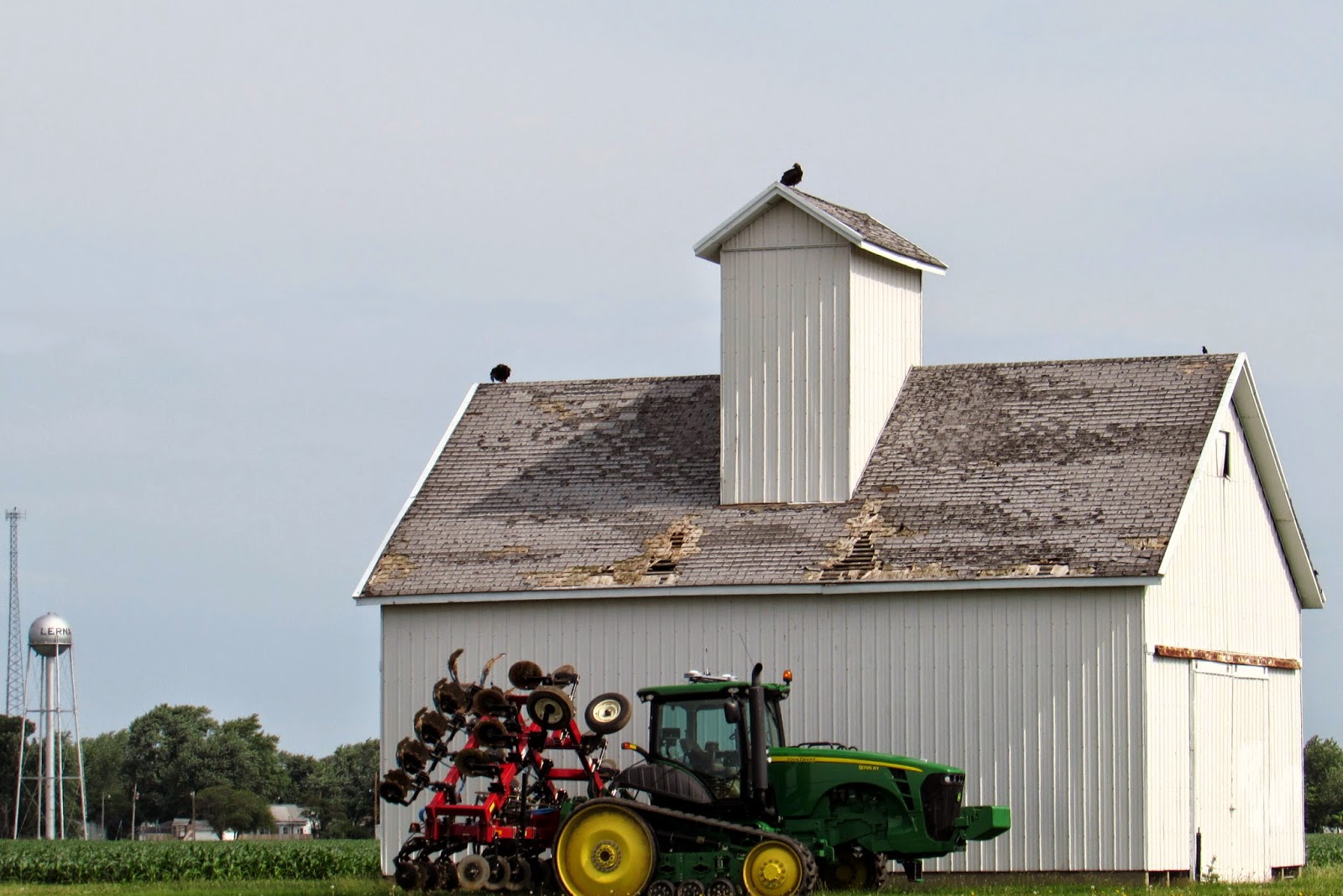 As I drove up toward Lerna, I saw buzzards on the roof of this shed. 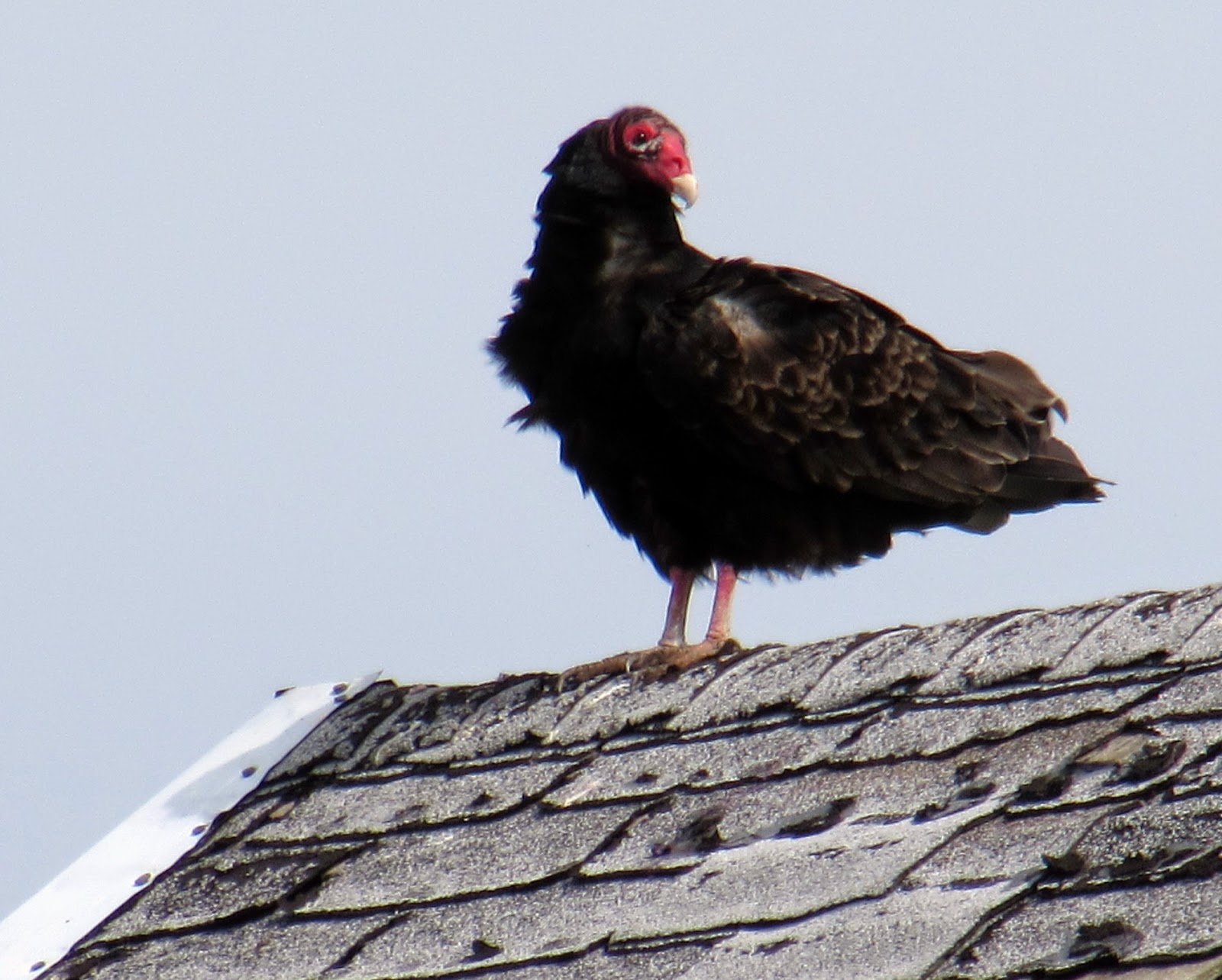 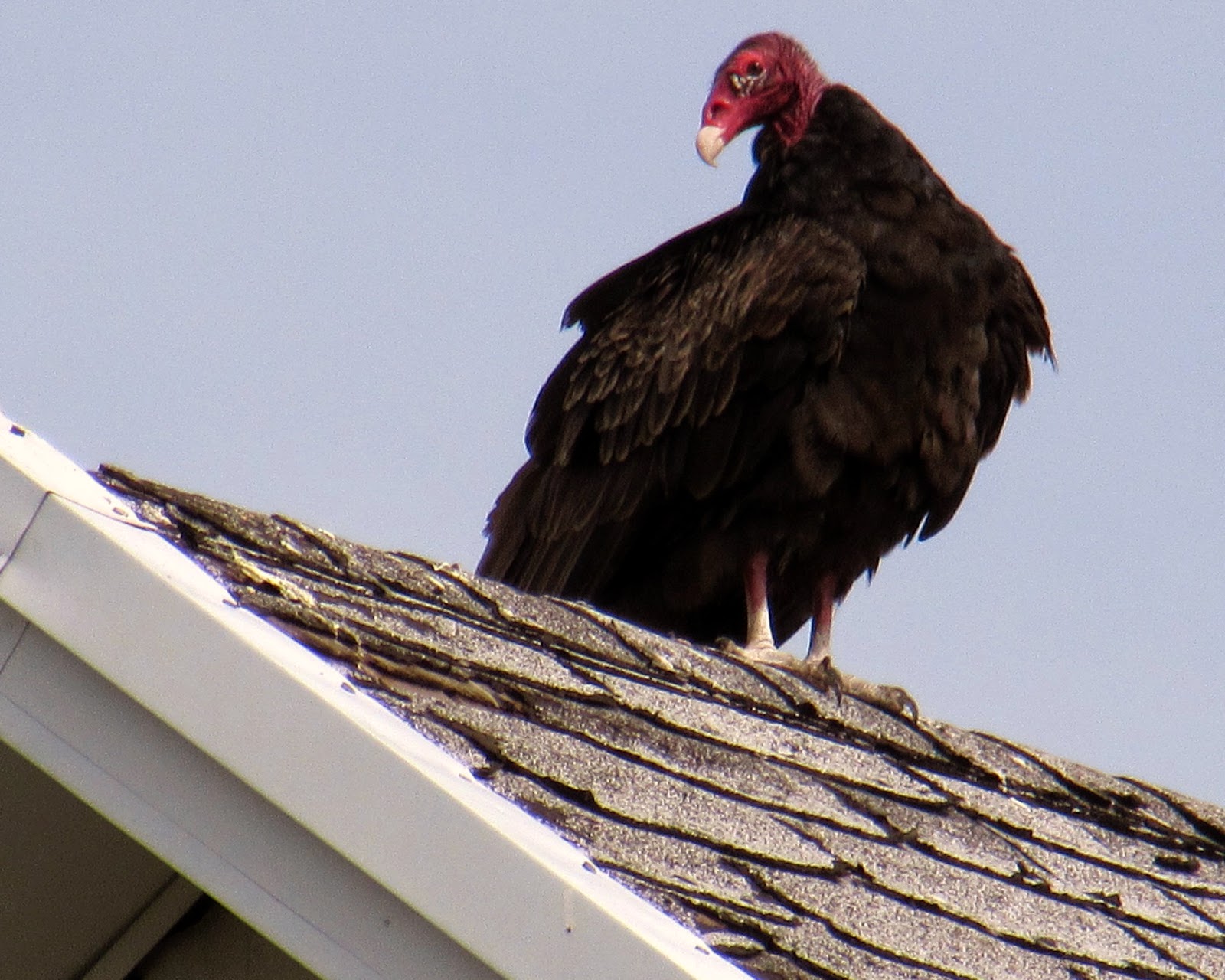 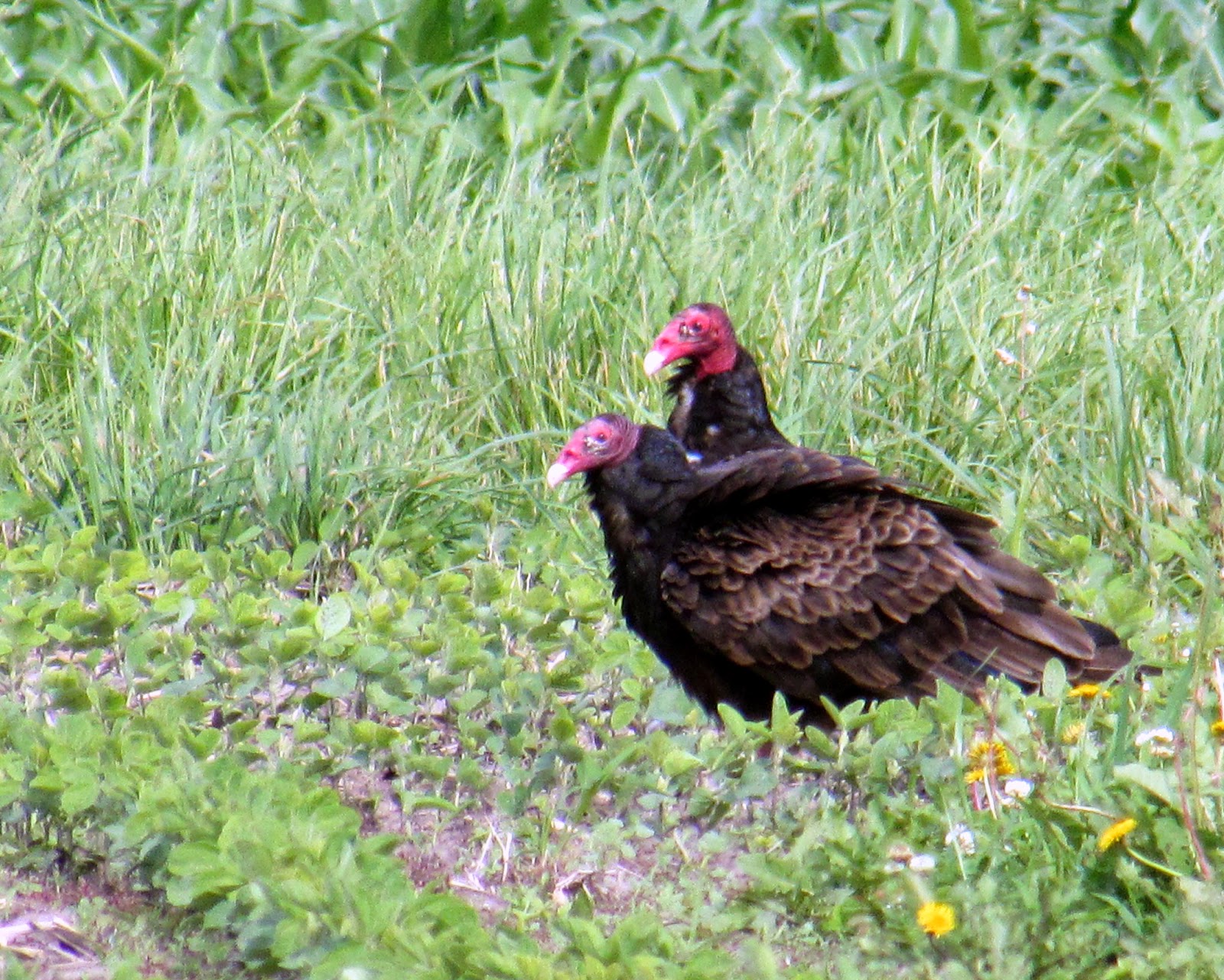 ...and these two. Ugly old things don't you think?