Warning, may need your magnifier of choice. The first two shots were taken while we were parked on a bridge where we always look for a Blue Heron who once hung out in this spot. 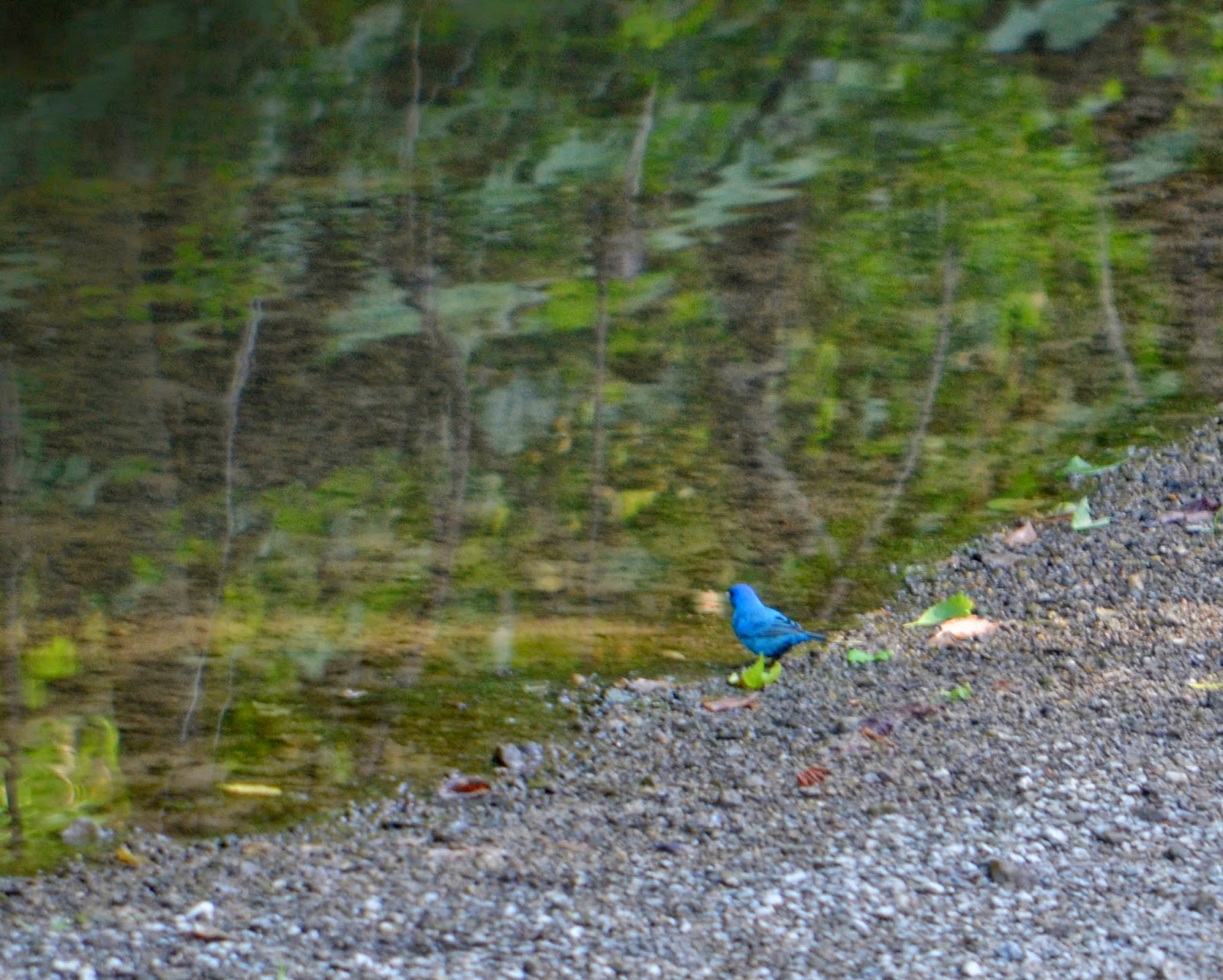 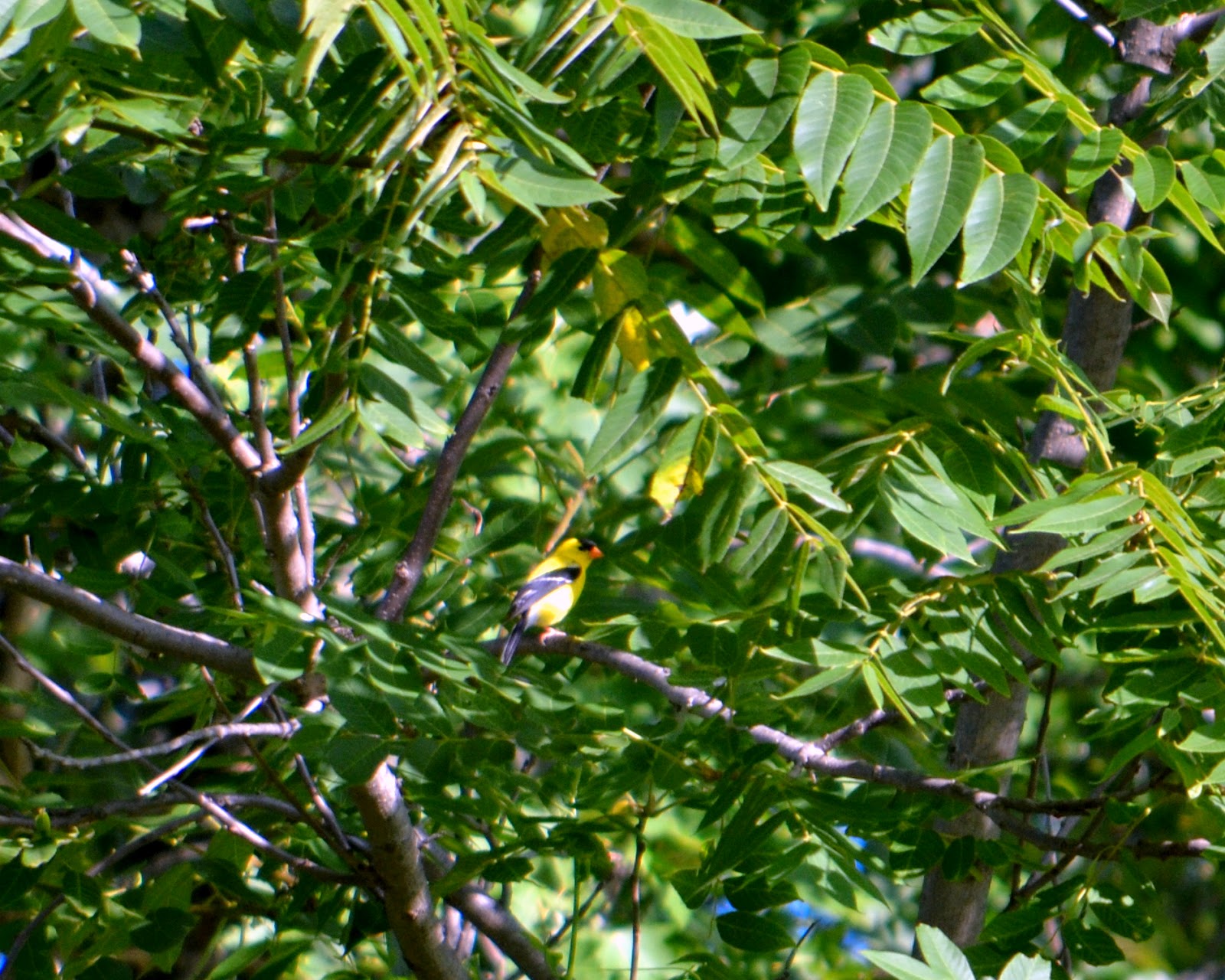 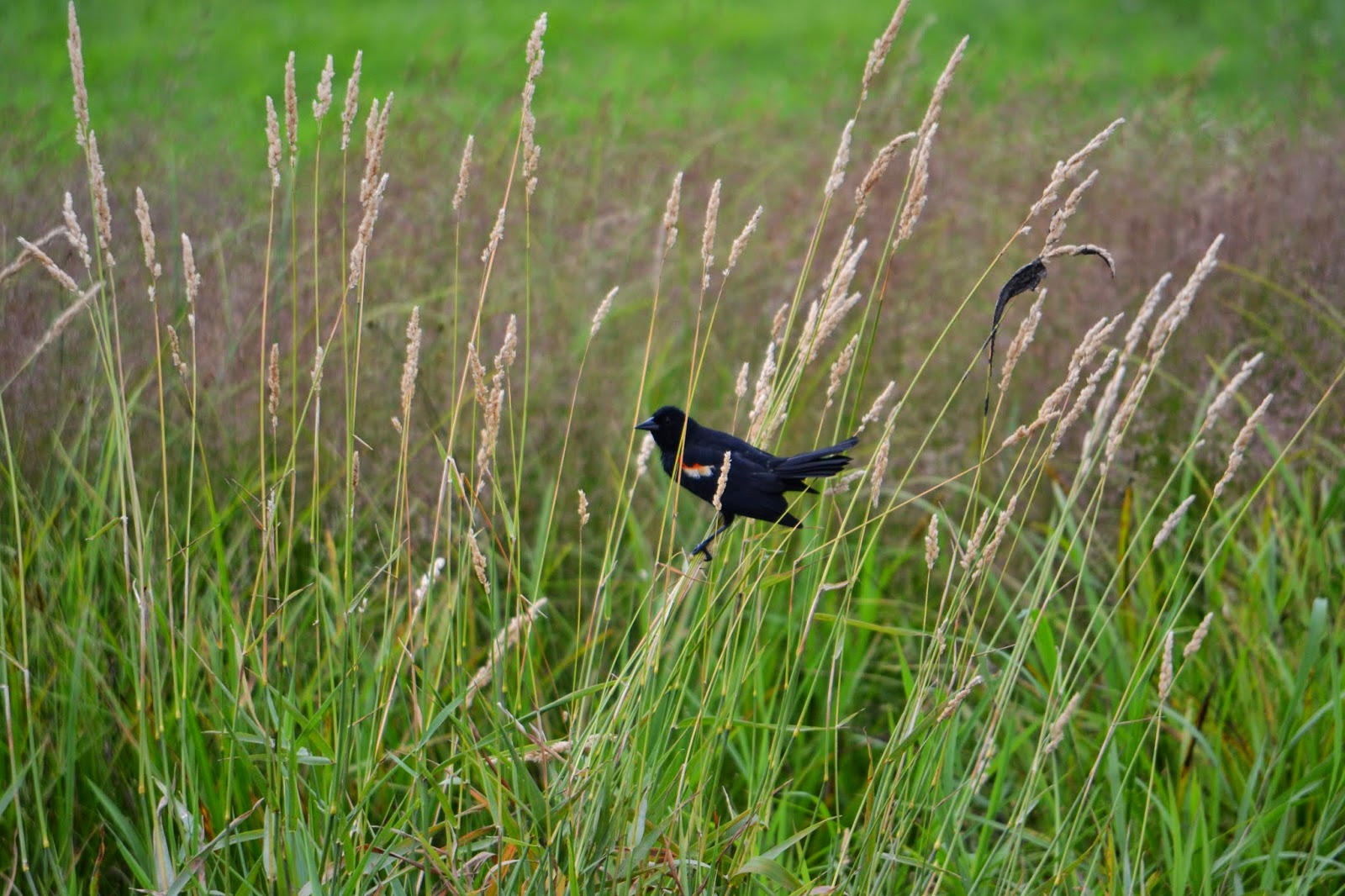 And what would one of my bird posts be without a Red-winged Blackbird. Male. 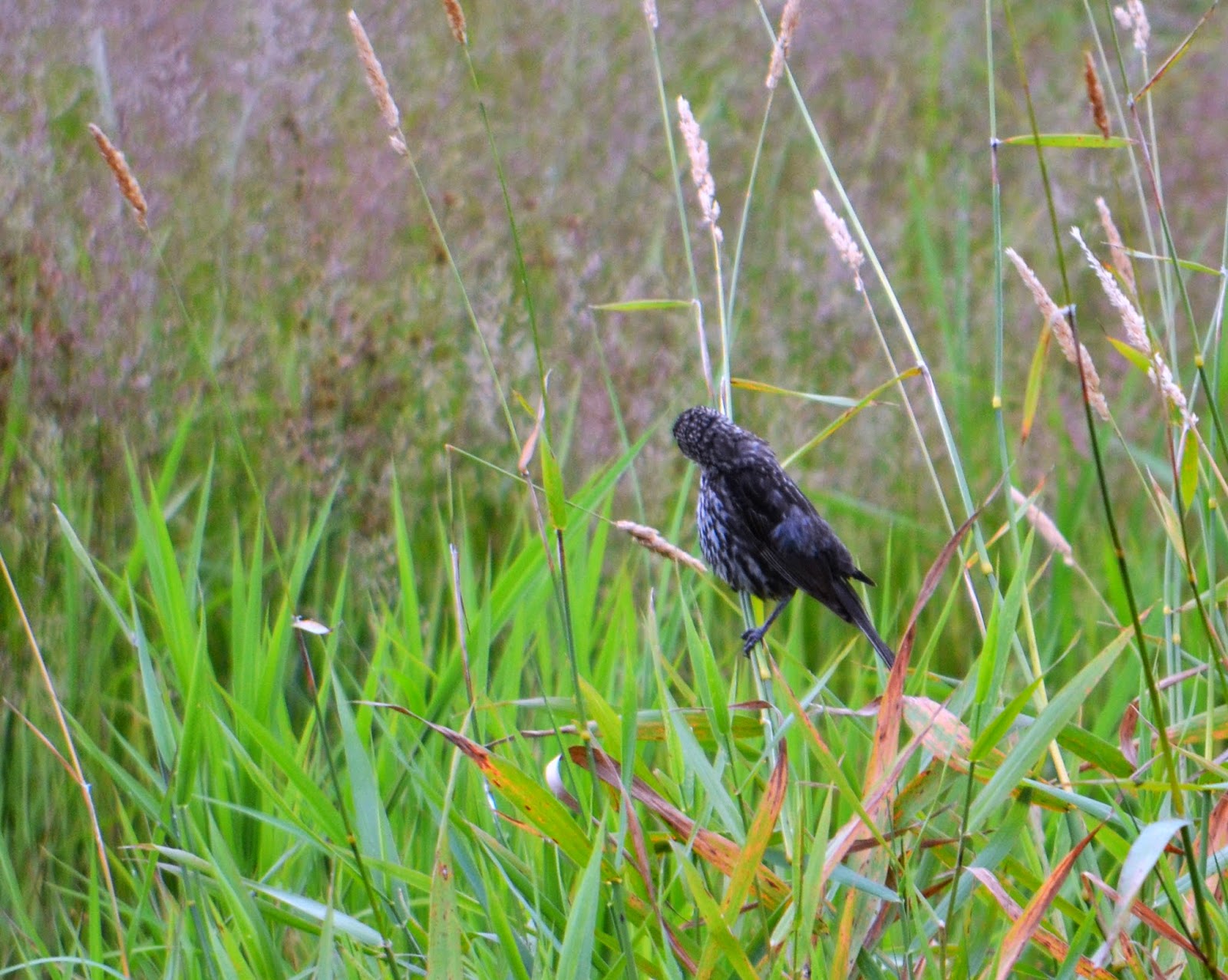 Female. What the heck is she doing? Guess she had an itch.

Linking to the Bird D'pot
Posted by Roan at 8:39 PM 8 comments

I found these horses on my ramble down The River Road. 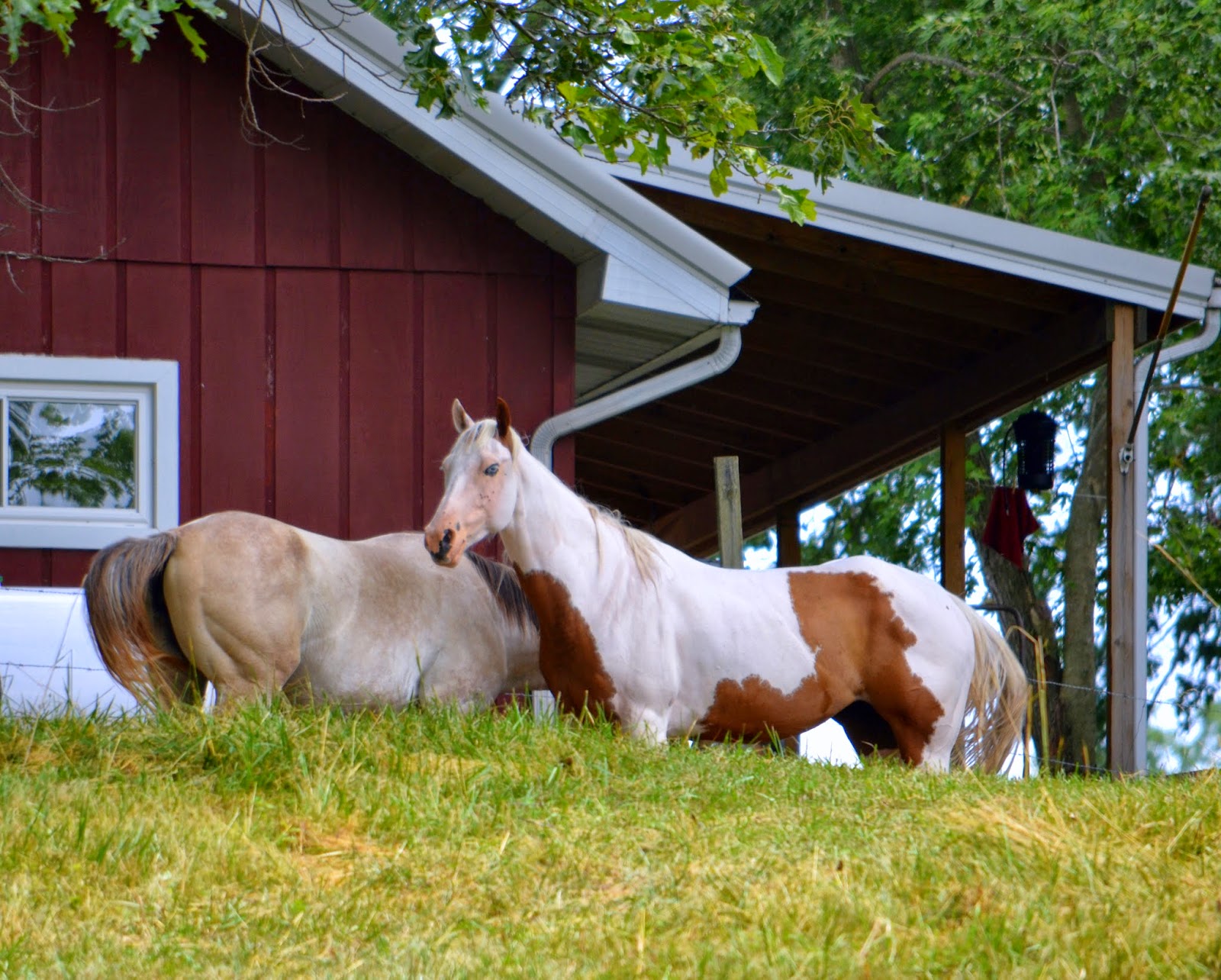 When I first saw these critters, they were both facing the road. As is always my luck, one turned around and gave me the moon. 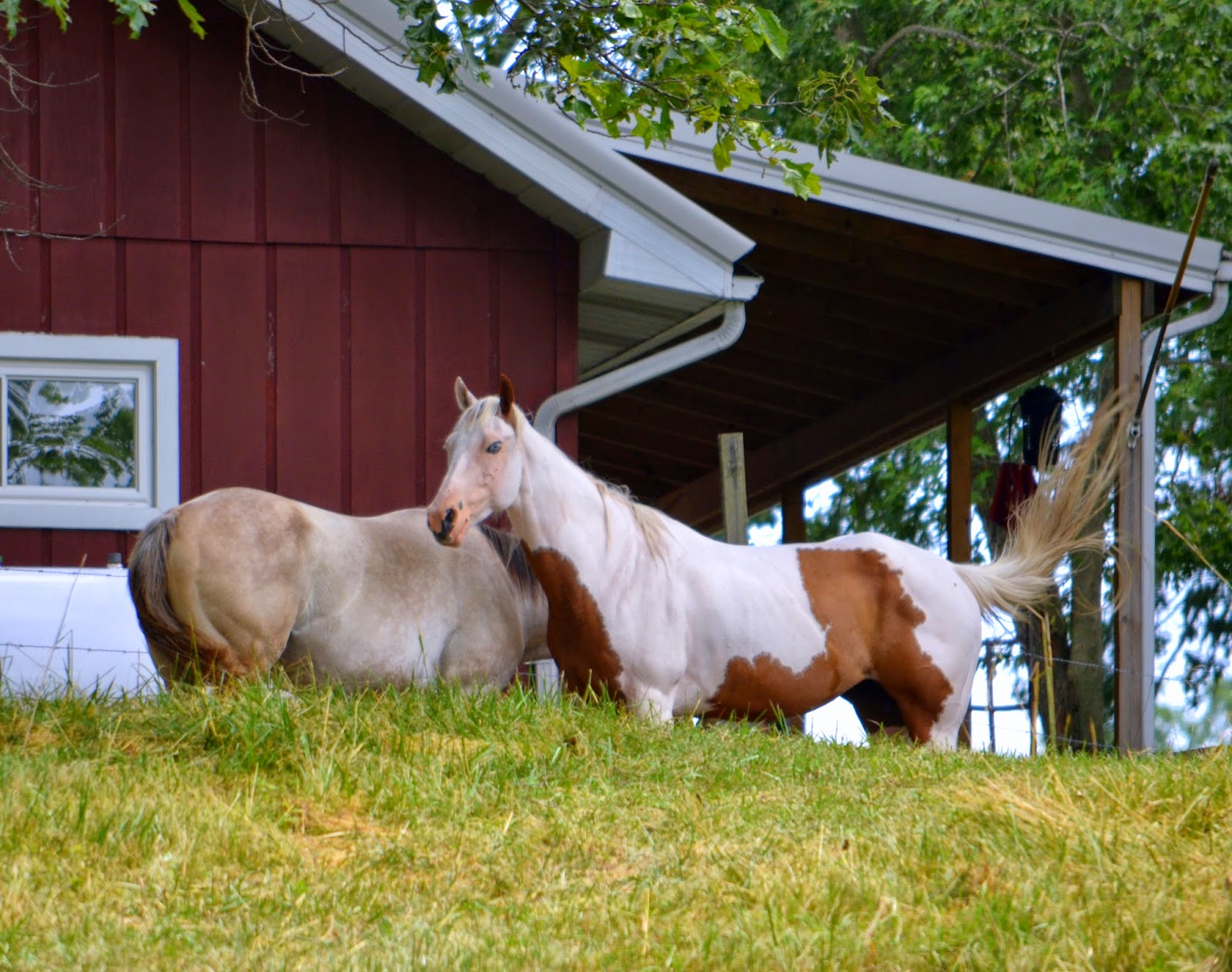 In this shot, some smallish critter is being swished away by a tail. 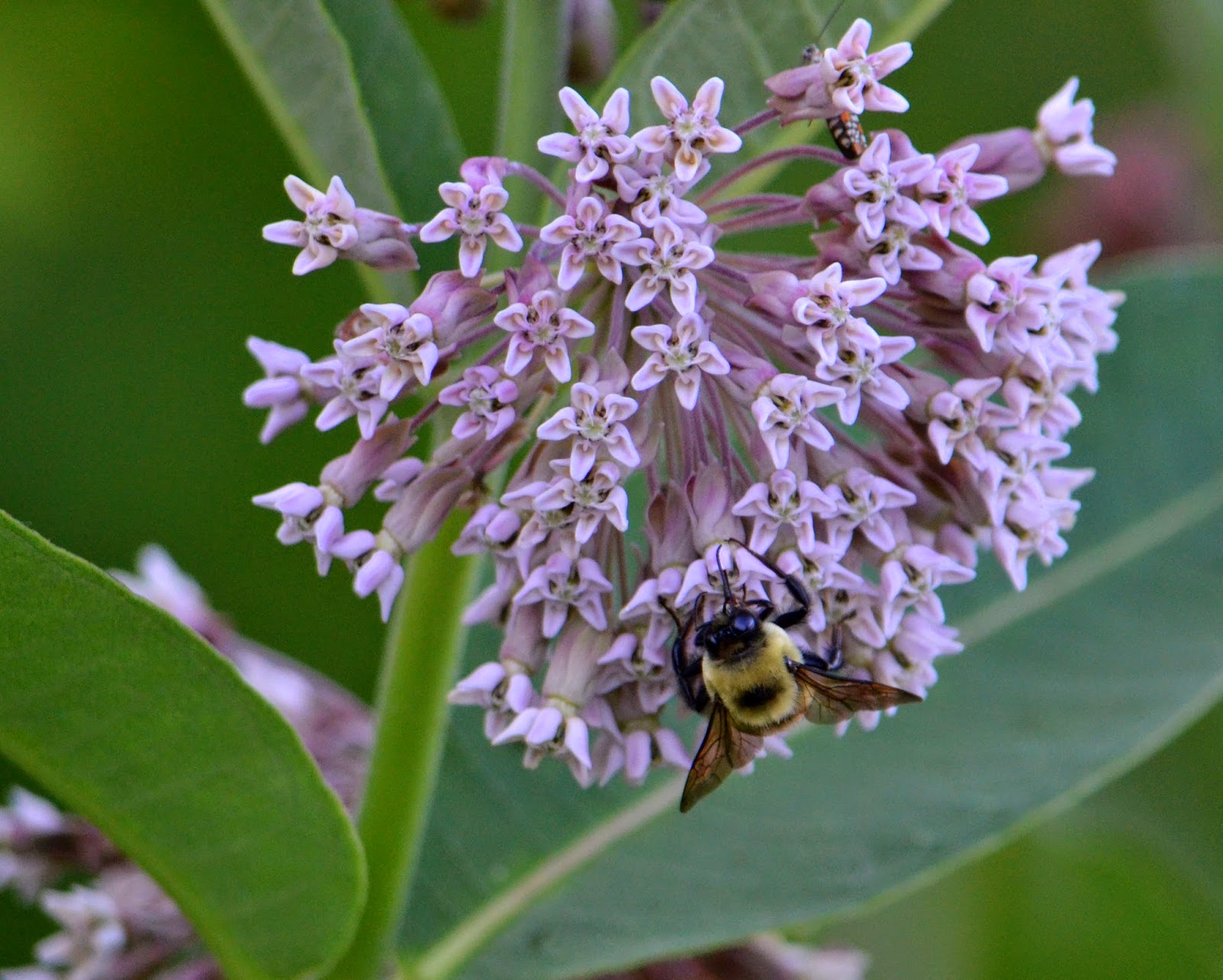 I really like milkweed blooms. Seems this bumble bee does too. Have you ever used the milk to rid yourself of warts? It works. I have a tiny little wart on the palm of my right hand just below the ring finger. I rubbed milk weed on it and it disappeared for several years, but it is back now. I will be using some of that milk again this year. 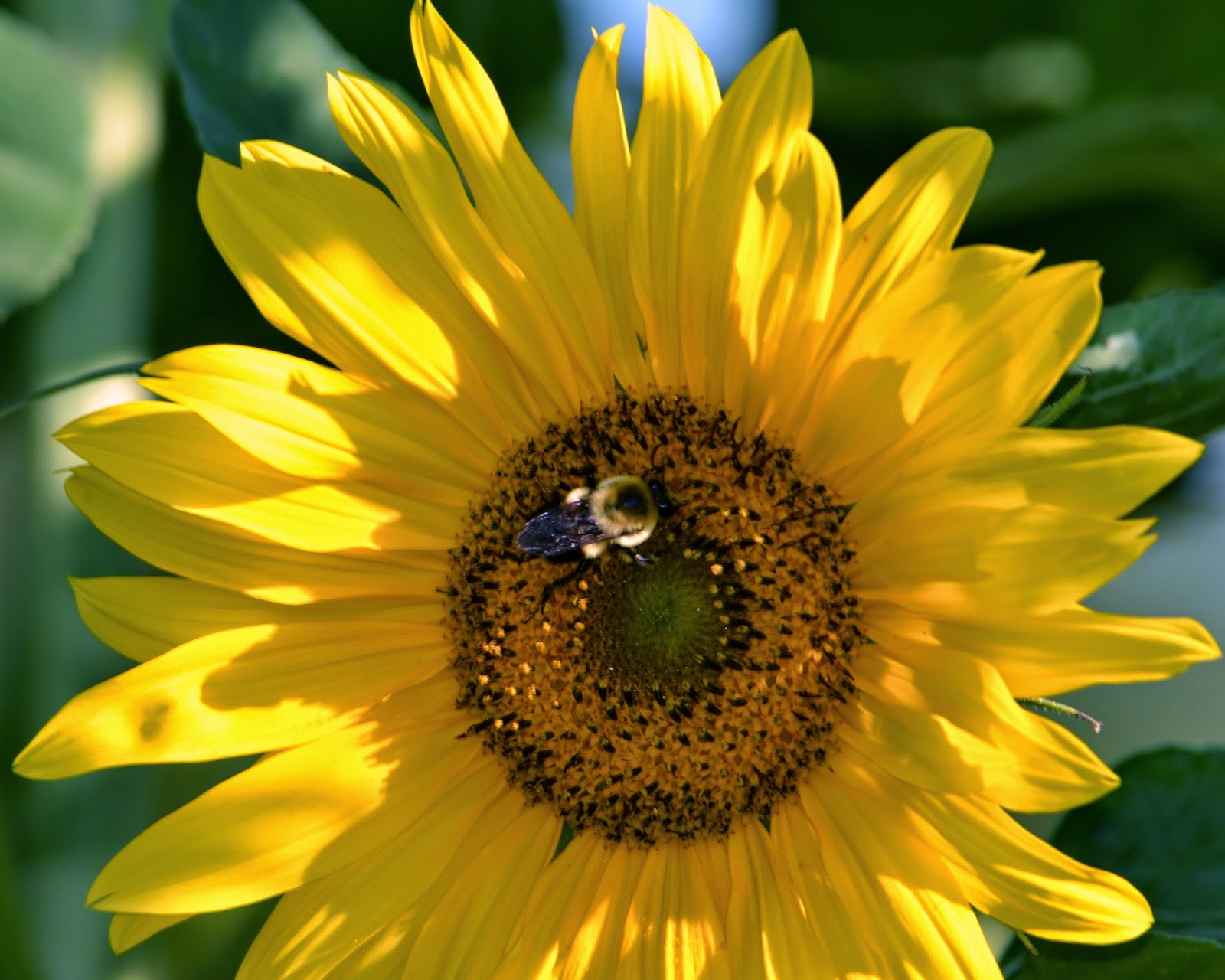 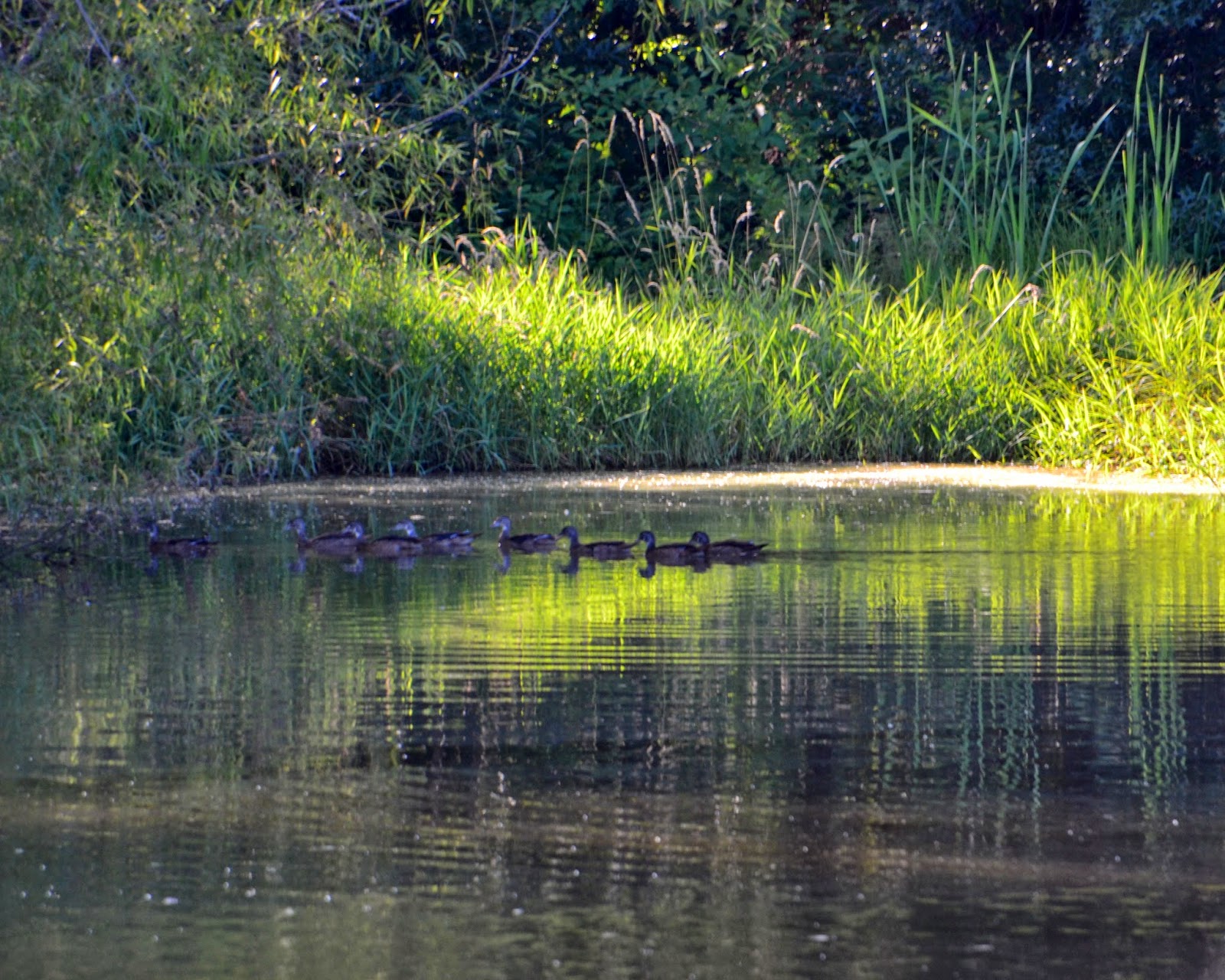 Thursday night as we drove up to the garden, we saw these juvenile wood ducks swimming on the far side of the pond. When they saw us, they took off.

I'm off to work. It's a sad place to be right now. My boss was my friend. More than that really. She felt like family. Her family lived near mine when we were growing up. Everyone loved her. The service will be held Wednesday. I can only imagine the number of people who will stop by to say their goodbyes. She was a bright light in many lives. She will be missed.

Hope your weekend is a good one.


Linking to Saturday's Critters
Posted by Roan at 6:54 AM 10 comments

Only the Good Die Young

Friend, family, and fearless leader. She will be missed. 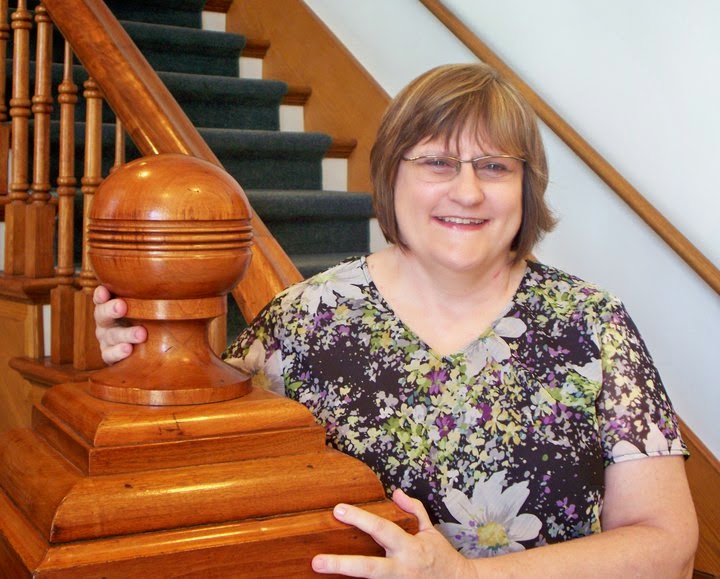 I have posted this fence before, but drove by it again last Sunday.  It surrounds an old family graveyard and is very old. Probably late 1800s. 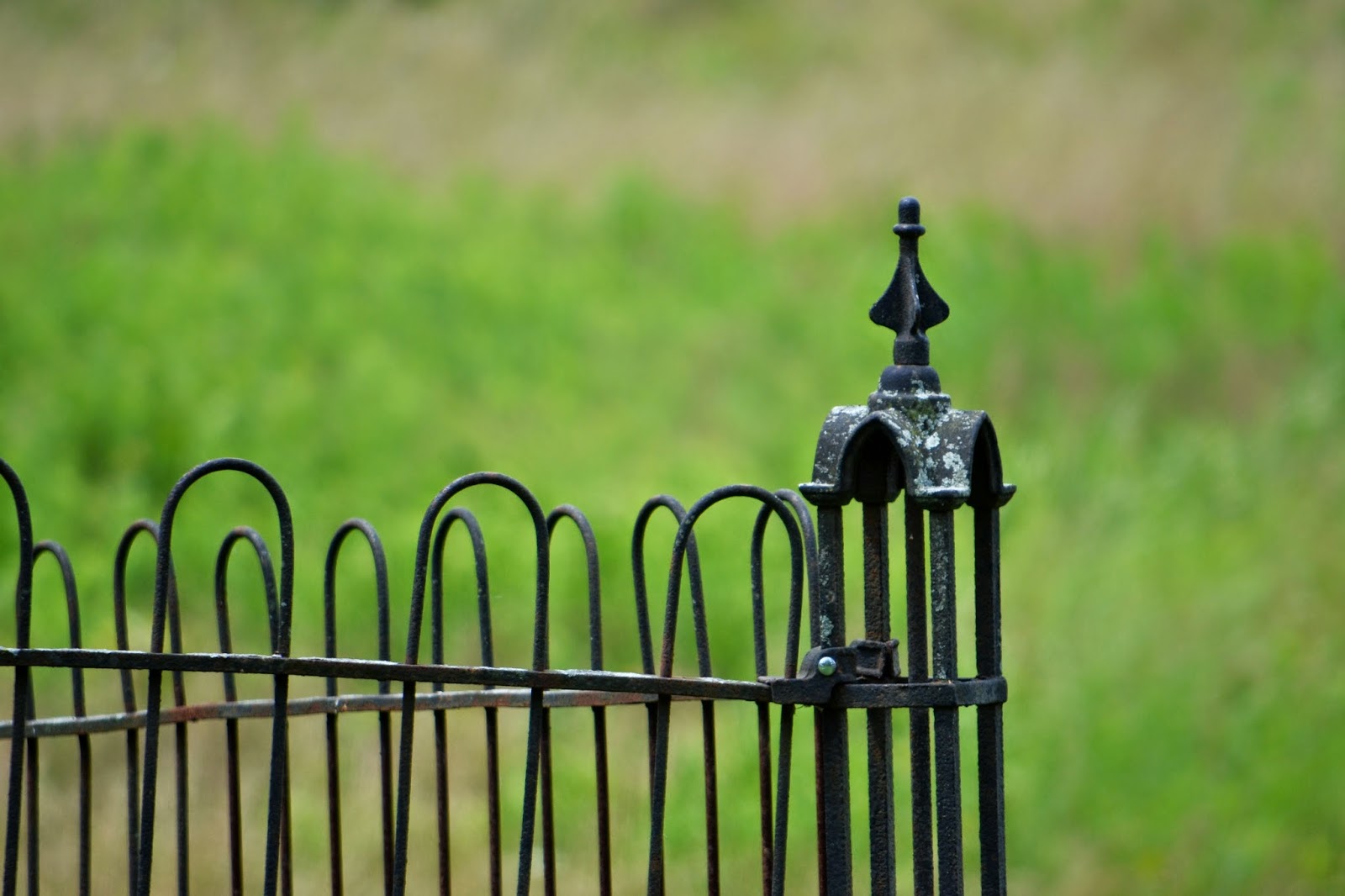 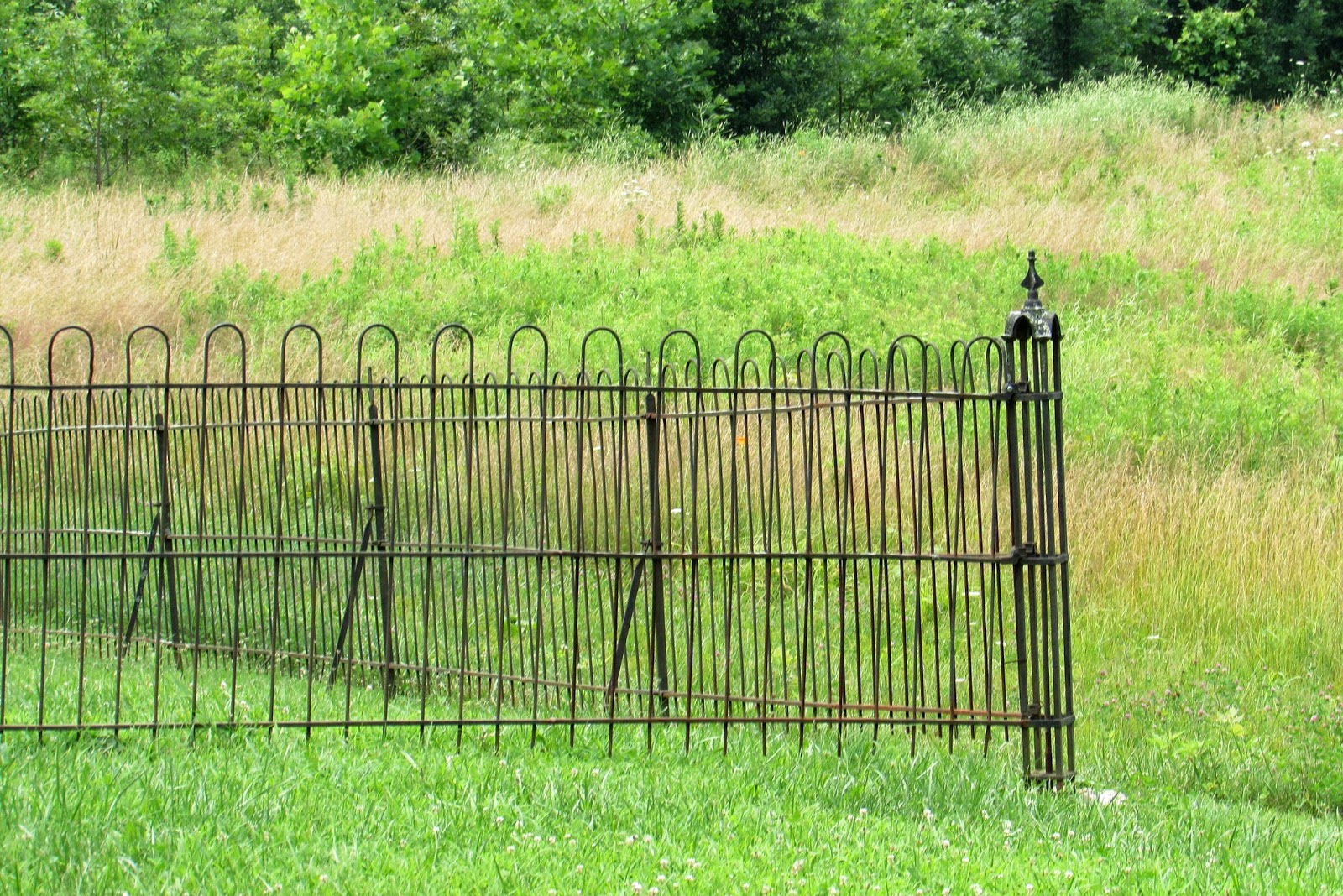 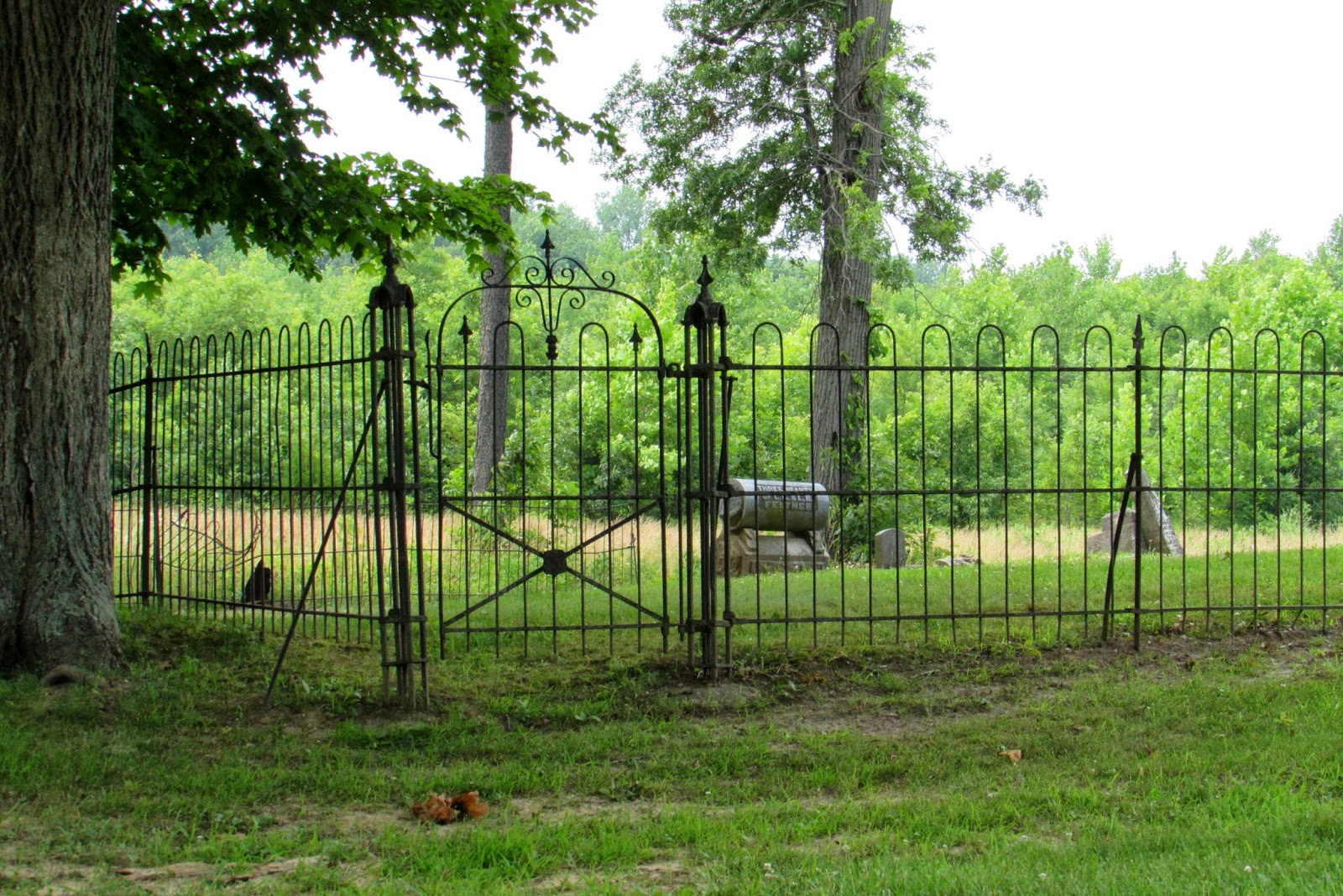 I want to apologize for not visiting much during the next several days. Our office is a 4 person office and our leader has been fighting a valiant battle with cancer for a lot of years. She is currently in intensive care with pneumonia. Which leaves me to work both of our desks. If you are of the persuasion, please say a prayer.

After last Sunday's ramble, on my way home I decided to drive through The Rez. Even though I hadn't seen any wildlife there in weeks, I am always hopeful. This time I got lucky! The water was really green. Hubs thinks it was treated for algae. 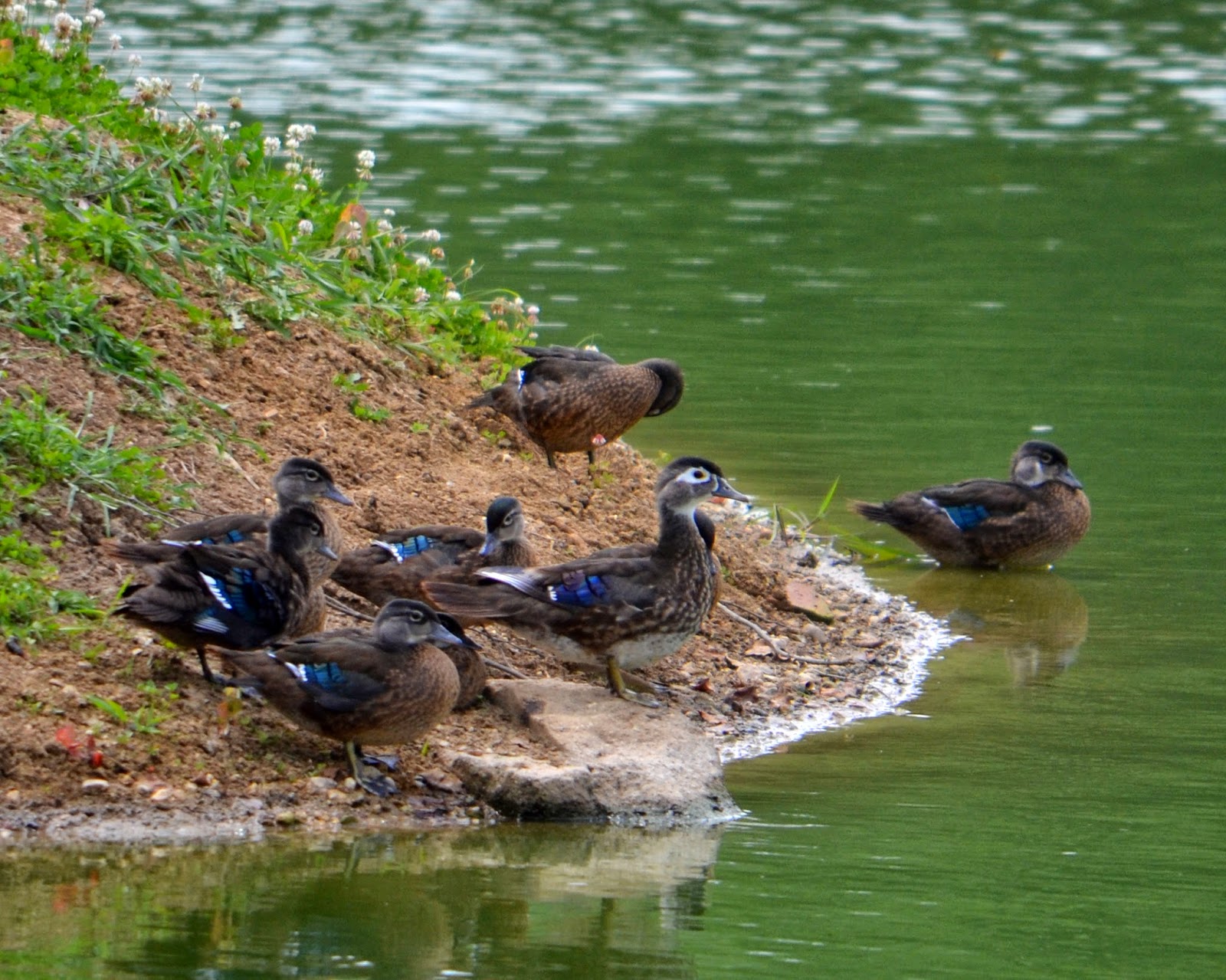 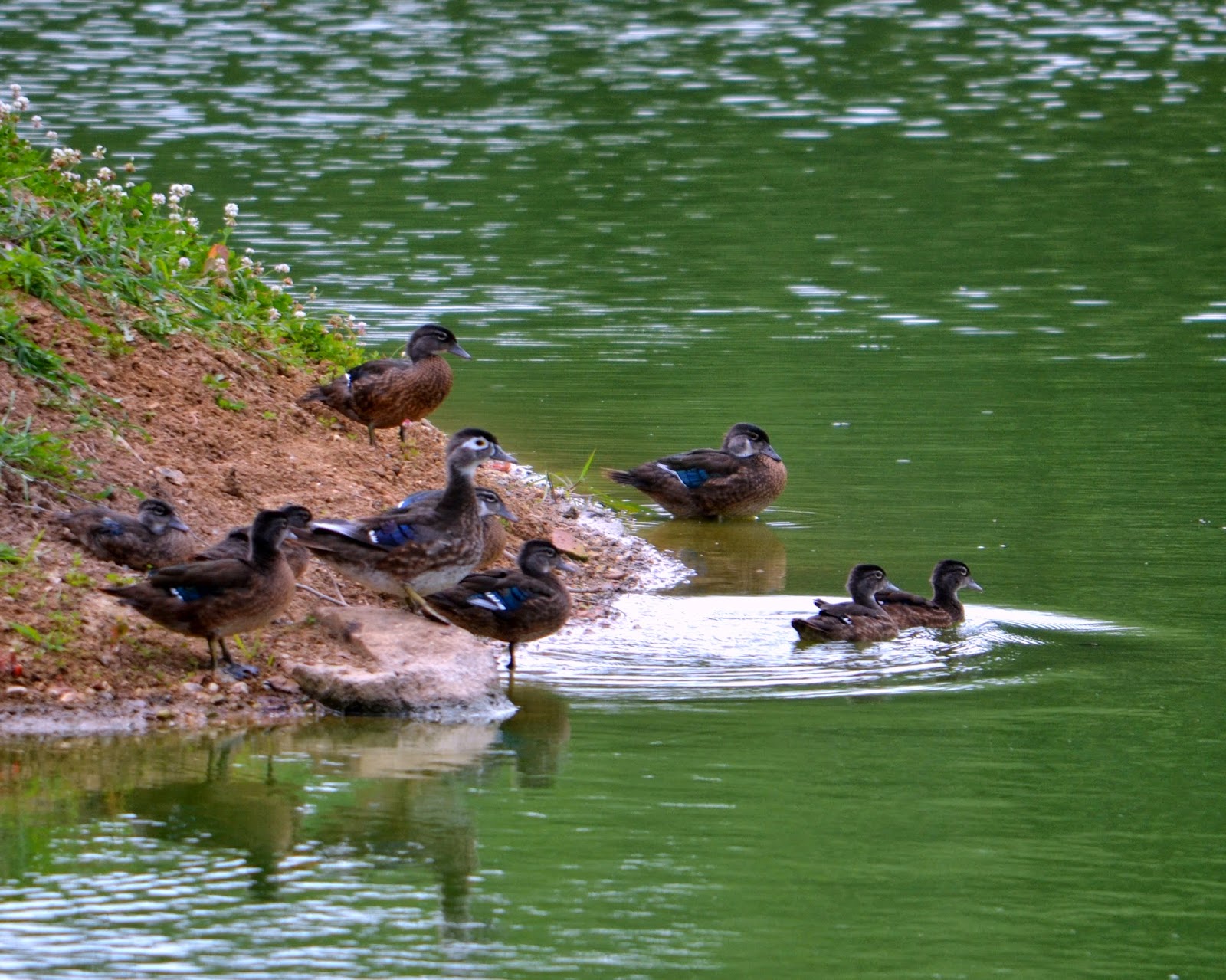 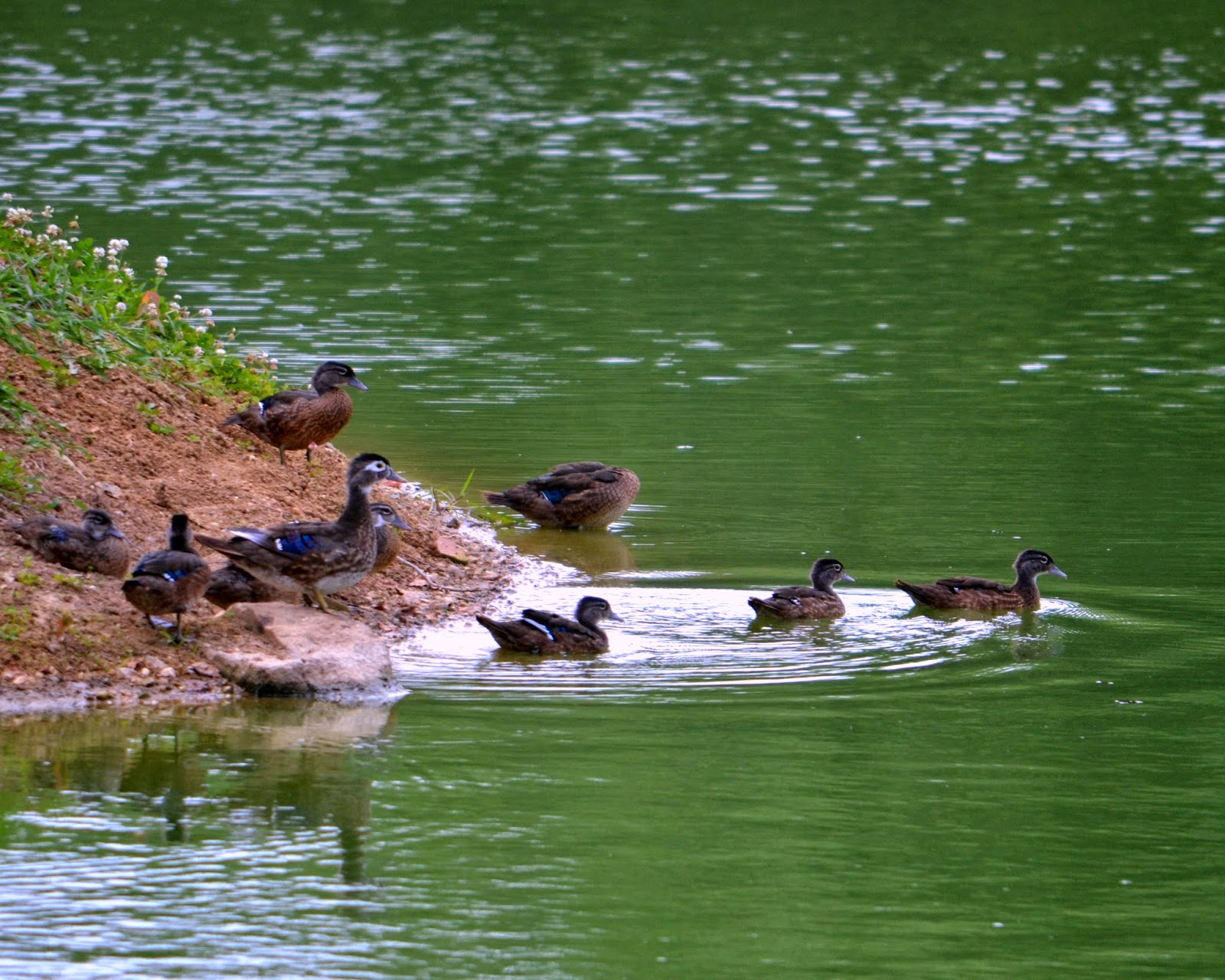 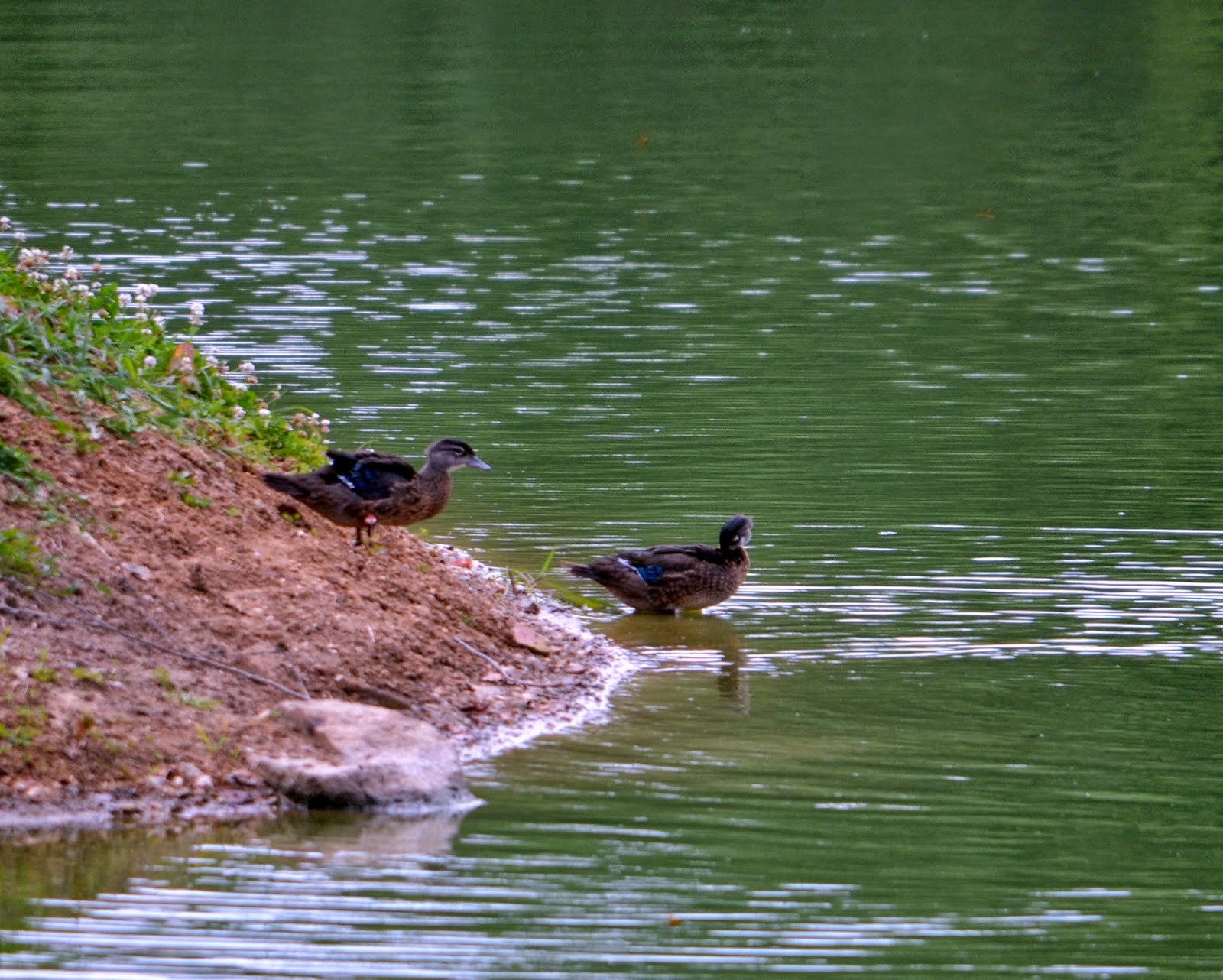 I think these are Juvenile Wood Ducks.


1. July is National Anti-Boredom Month. When was the last time you were bored? What's your go-to cure for boredom?

I found myself walking around the house alone last Sunday afternoon. Hubs was working. Dinner was planned and prepped as much as I could prep. I finished the book I was reading earlier in the day. I tried to write, but my muse must have taken the day off. So, I grabbed my camera, loaded Fergus in the car, and went for a ramble.

2. What's the last thing you made a reservation for?

That would probably have been dinner reservations when I still lived in Texas. I live in middle-of-nowhere Illinois. Diners don't take reservations. On second thought, probably hotel reservations.3. What's one thing on your summer 'bucket list'? Any plans to make it happen?

I want to go to Hannibal, Missouri. I will need to have about 2 days off during the week so Hubs can go, too. He rarely gets a day off on the weekend. It will need to be spur of the moment. We can't really plan until Hubs gets his schedule. He rarely ever gets the same days off during the week. If that doesn't work out, I will take myself down to see my son.4. What's your favorite summertime sip?

Iced Green Tea with lemon. No sugar.5. What do you find is the best way to handle another person's hostility and hopefully ease the tension?

I practice avoidance. I don't have time for those kind of people.6. Your favorite film set in summer?

Now this answer will age me, as if you haven't already figured out I'm older than dirt. A Summer Place with the dreamy Troy Donahue and Sandra Dee. Two of my favorite actors when I was a young 'un. Besides, I was madly in love with Troy. It was a risqué movie back then, which added to its appeal.
7. What word are you using too much lately?

Funny. When co-workers tell me a 'funny' story, I always laugh and then say, "That's funny." I'm tired of hearing 'funny' come out of my mouth, but can't seem to stop myself before it plops out.8. Insert your own random thought here.

A man came in the office last week looking for the Assessor's office. Once upon a time it was in the courthouse, but now it is in the annex building. The girl at the desk told him the annex building was 'kitty-cornered' across the street, which sounded correct to me, but obviously not to the man. He asked, "How do you spell that?" The girl didn't know, so he picked on me and the other girl in the office. We had no idea. He says, "It is spelled
c-a-t-e-r-c-o-r-n-e-r-e-d." I didn't dispute his obvious knowledge, but as soon as he left, I pulled up Google to prove to myself kitty-cornered was proper. What did I find out? I was wrong and he was correct. Did you know there is a Gunsmoke episode titled, Kitty Cornered?

Linking to Wednesday Hodgepodge
Posted by Roan at 6:34 AM 23 comments

So today's rubbish is a collection of finds from a drive down The River Road. It was a hot day and Hubs had to work. I think it's great Home Depot hires retired people, but poor Hubs rarely ever gets a day off on a weekend and I rarely get a day off during the week. Anyway, since Hubs wasn't home it was a perfect day for a ramble. 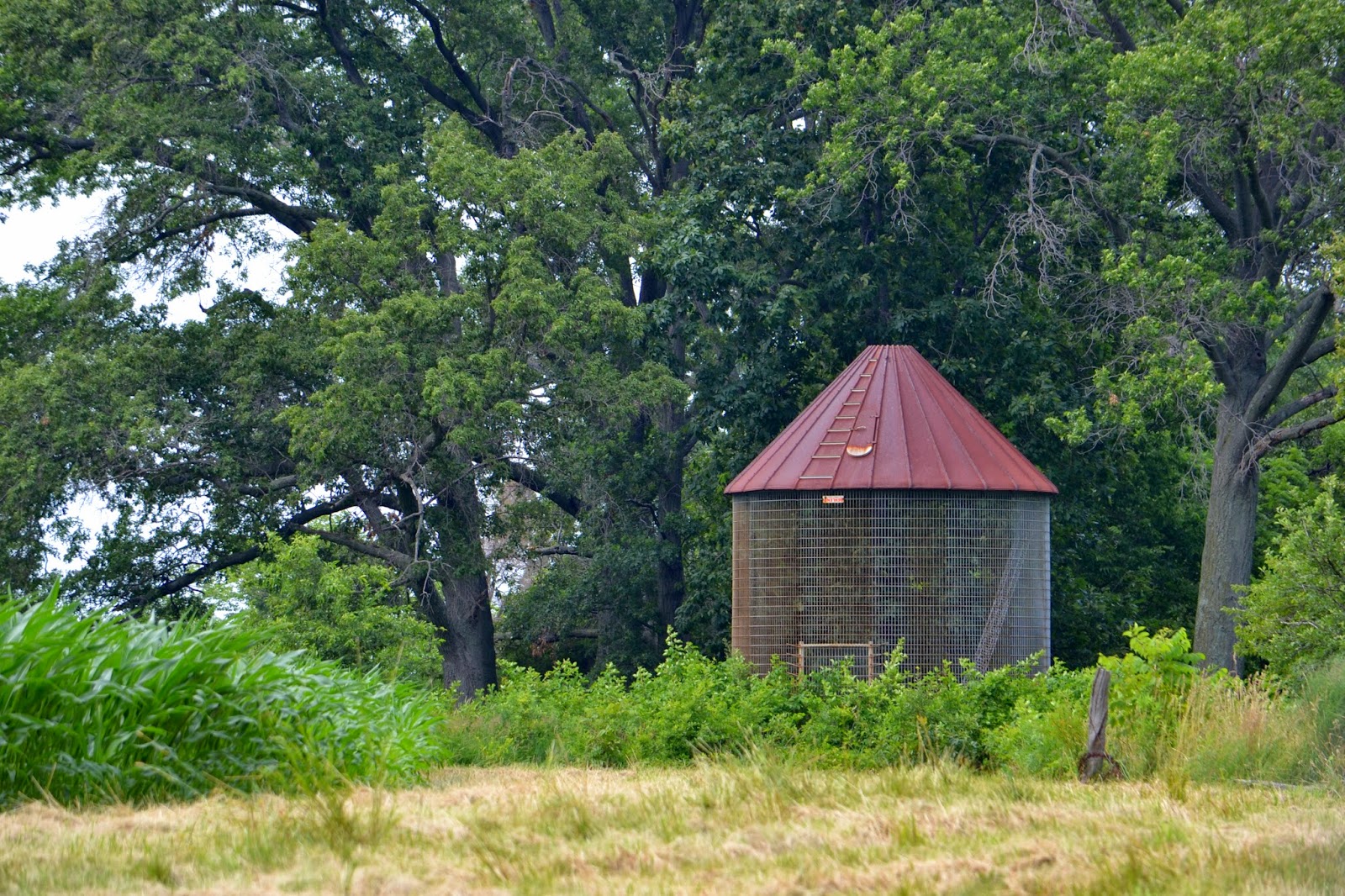 I found a corn crib that looks a lot like the one by Bro O's house, only the top has a higher peak on this one. 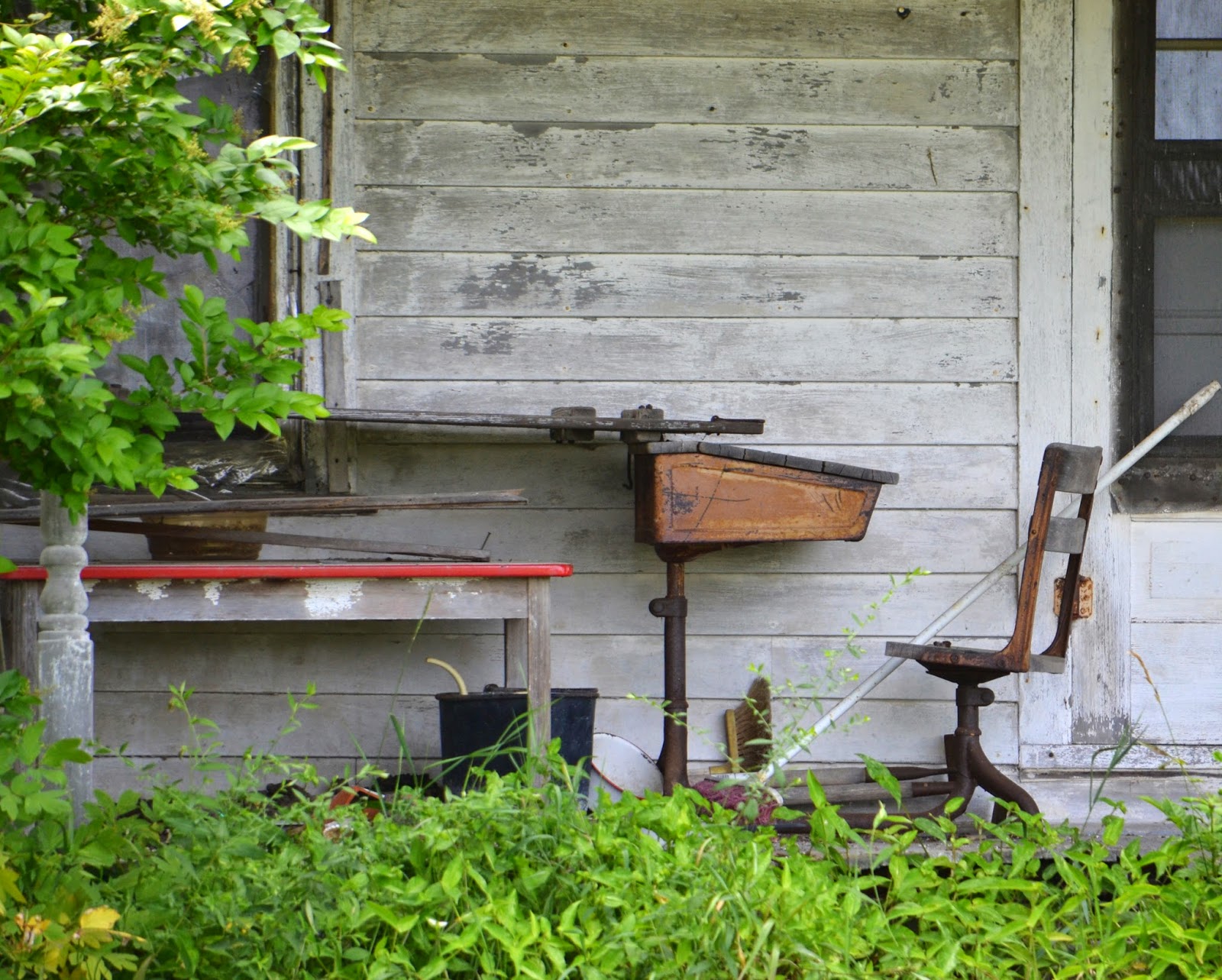 This old house had some goodies stowed on the front porch. An old school desk and a table, along with some assorted pots and pans. Then there is the not quite as old broom. This house is not that far from Greenup, so I'm wondering if the desk came out of the Greenup school which was torn down several years ago. The desk looks like some I had back in the day. 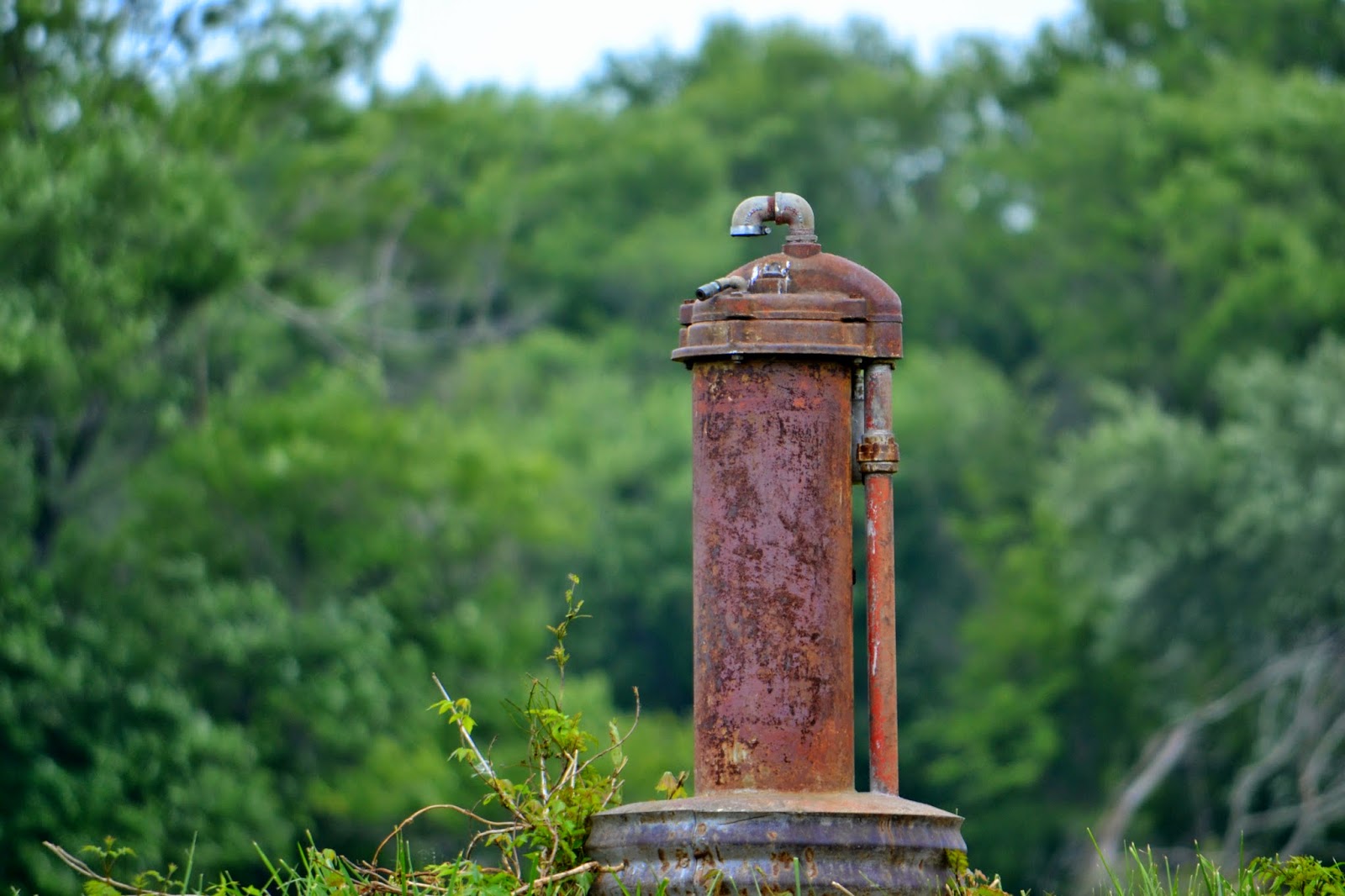 Not sure what this is. It isn't far from the river. Looks like some type of water pipes??? 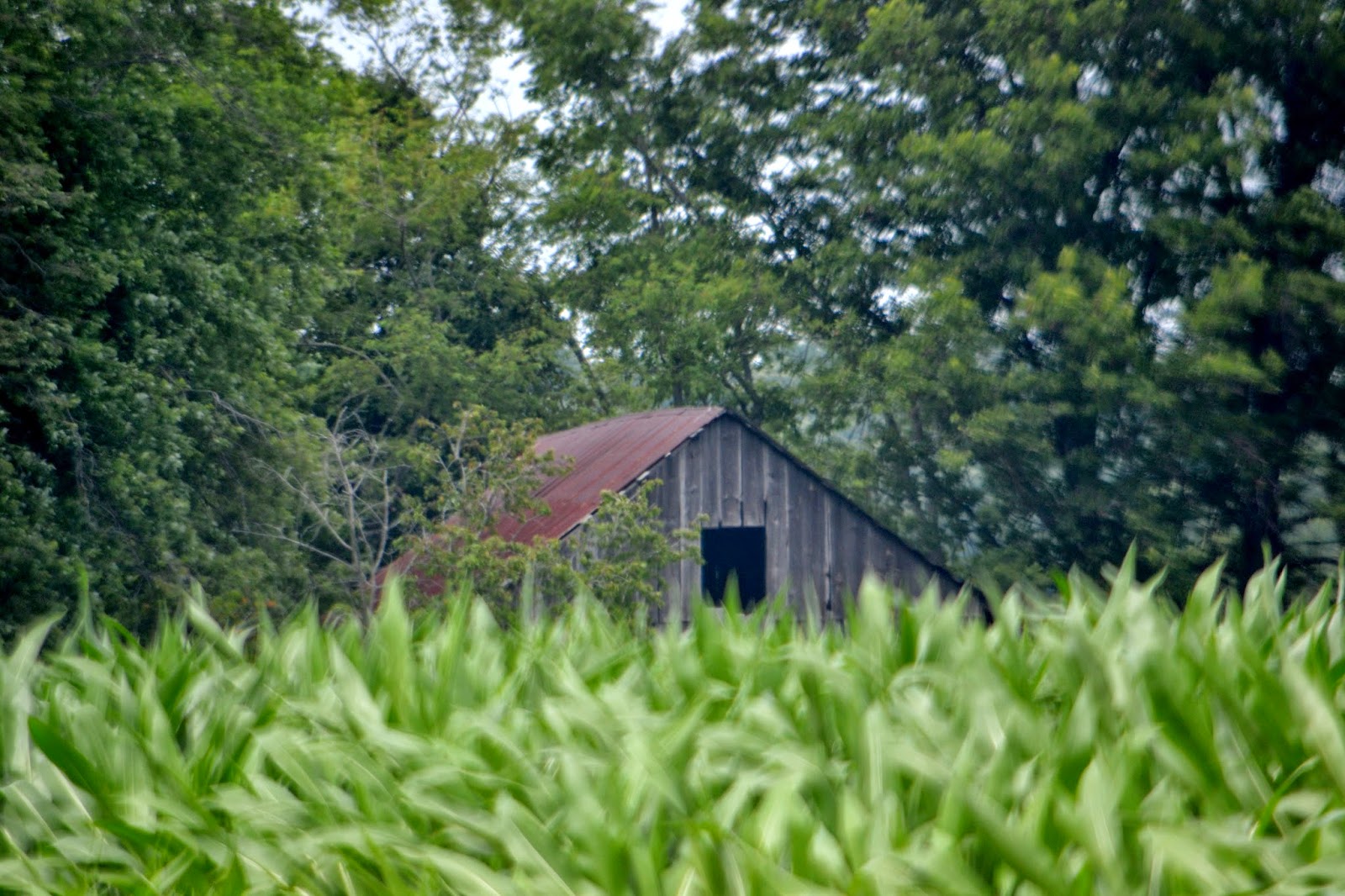 Peeking out over a corn field, was this top portion of an old barn. The corn is supposed to be knee high by the 4th of July, but this corn is way taller than that. It was a good year for planting. 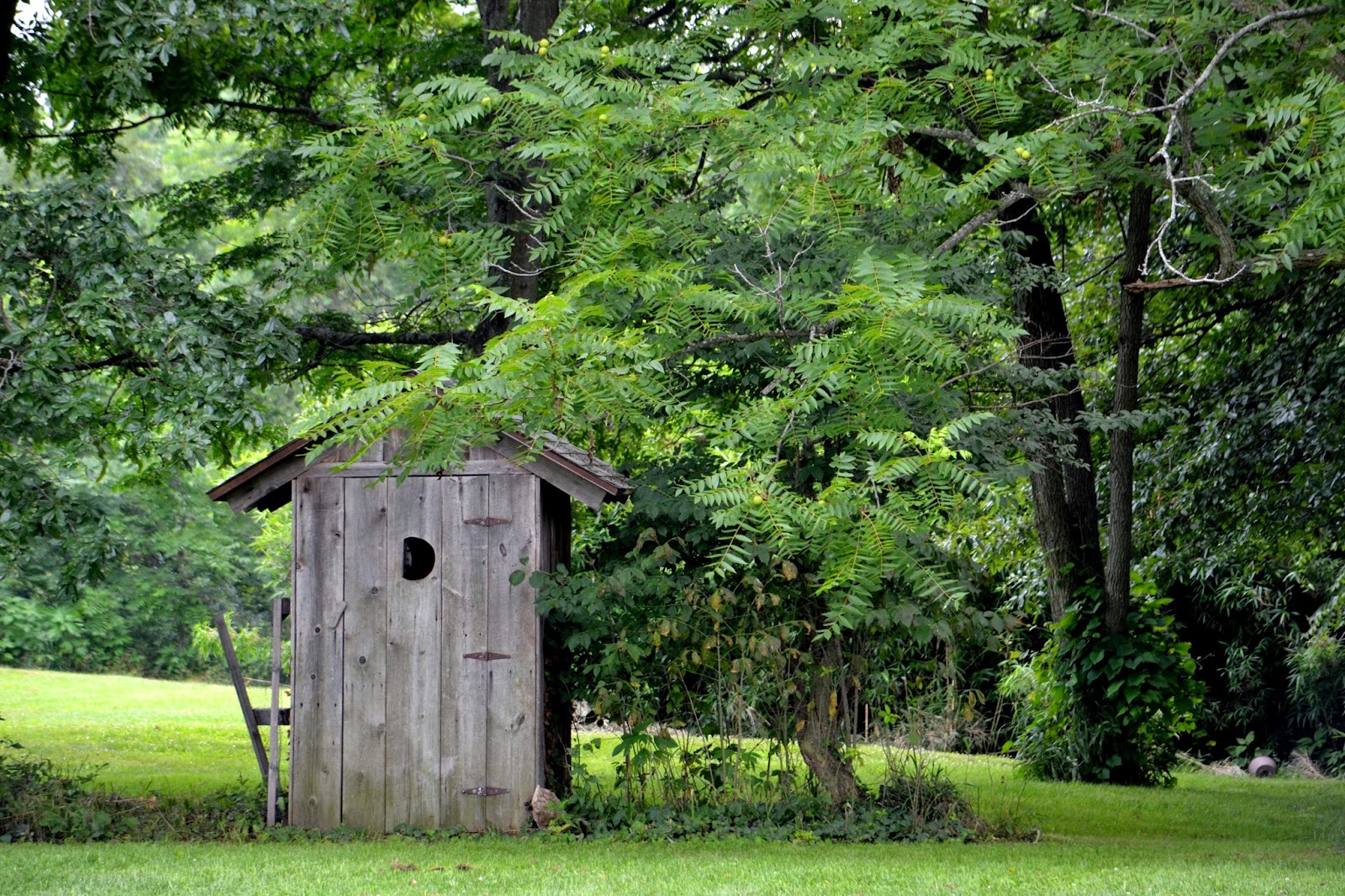 An old outhouse that appears to have had some TLC over the years. 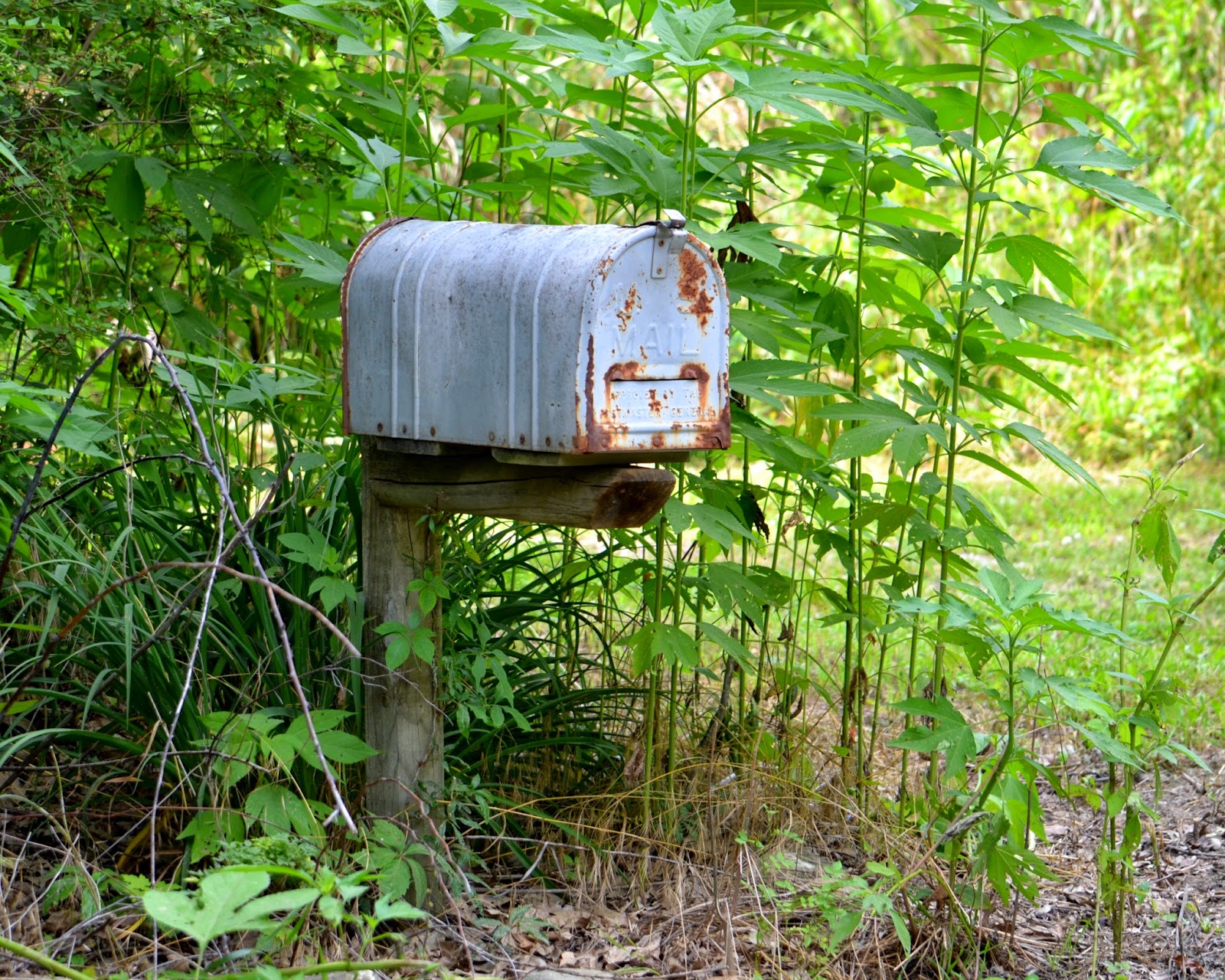 And lastly, an old mailbox.

1. Link to a post featuring photos of something old.
2. Link back to Rubbish by Roan in your post.
3. As time allows, visit other participants and comment on their posts.

Saturday night, date night at the garden. Woo Hoo! Excitement! I haven't been able to see many variety of birds so far this year, so on this night I was expecting more of the same. Nothing! However, I was pleasantly surprised. I was able to add a few pictures to my collection of really bad bird shots. 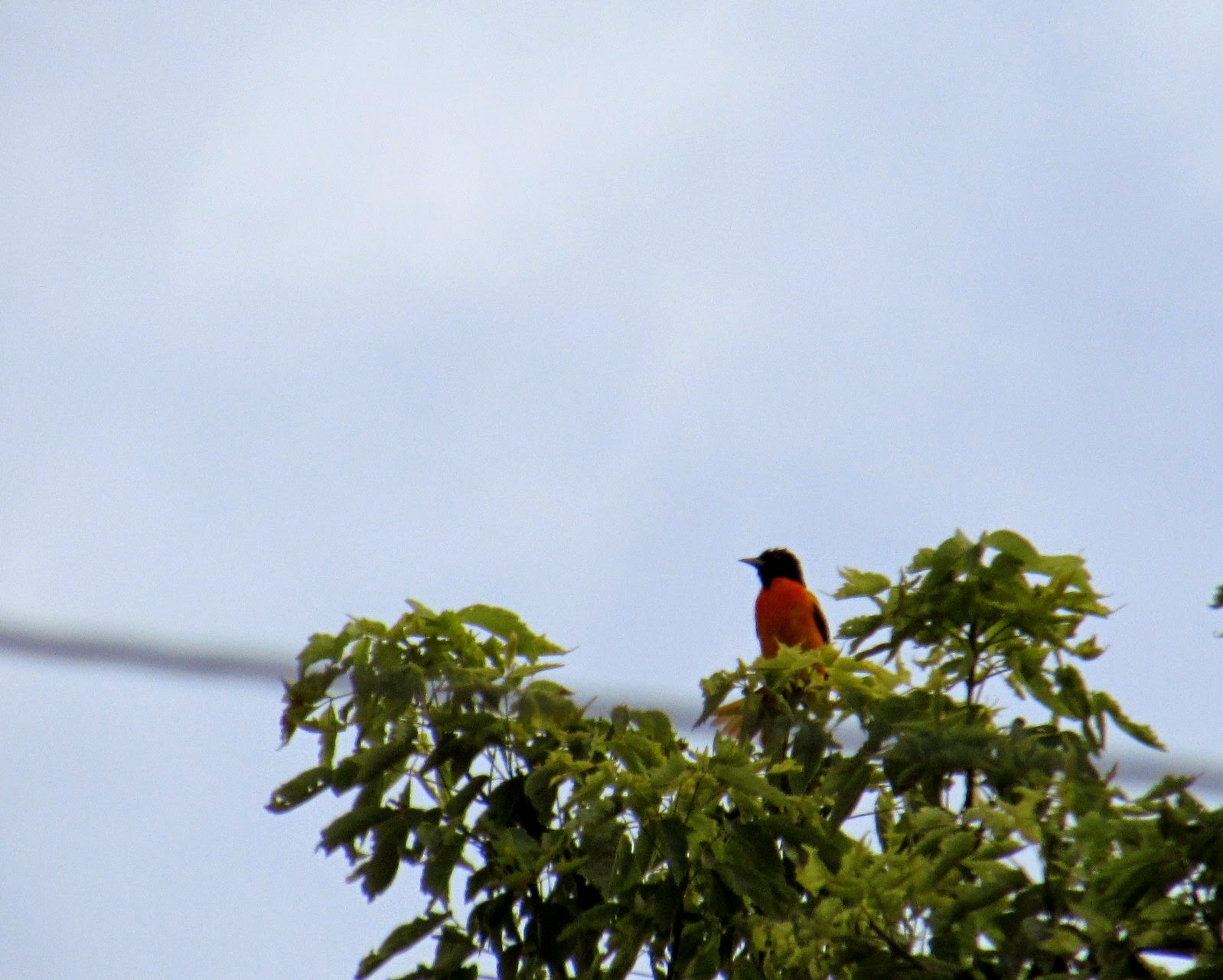 There is a bridge where we often see a blue heron, so we stop on the bridge and look closely to make sure he isn't hiding in the shadows like he is known to do. He wasn't there. As we prepared to drive on, I happened to look up and saw Mr. Baltimore Oriole watching us from his perch high up in the top of a tree.

We saw several indigo buntings, but they didn't pause long enough for a picture. We also saw 4 Goldfinches. I did get some really bad shots of them through the fantastically filthy truck windshield. They are sad excuses for pictures, but will post them later anyway. 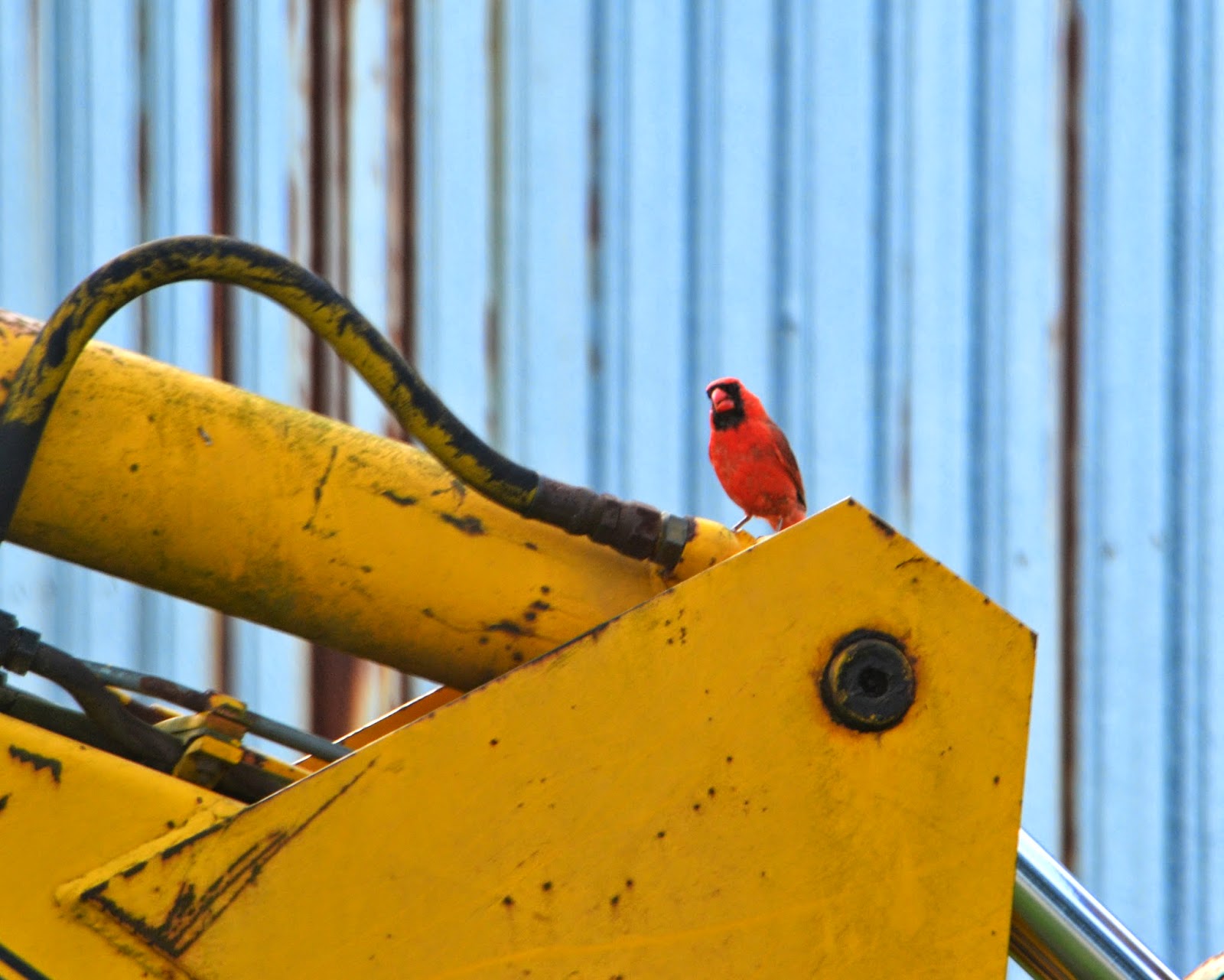 As we pulled into the driveway and drove around back of Bro O's house, I saw this Cardinale inspecting the backhoe. Wonder what he needed to dig up ormaybe he was looking to uproot a tree due to feud with neighbors. Anyway, this is another shot through the dirty windshield. He flew before I could get out of the truck. 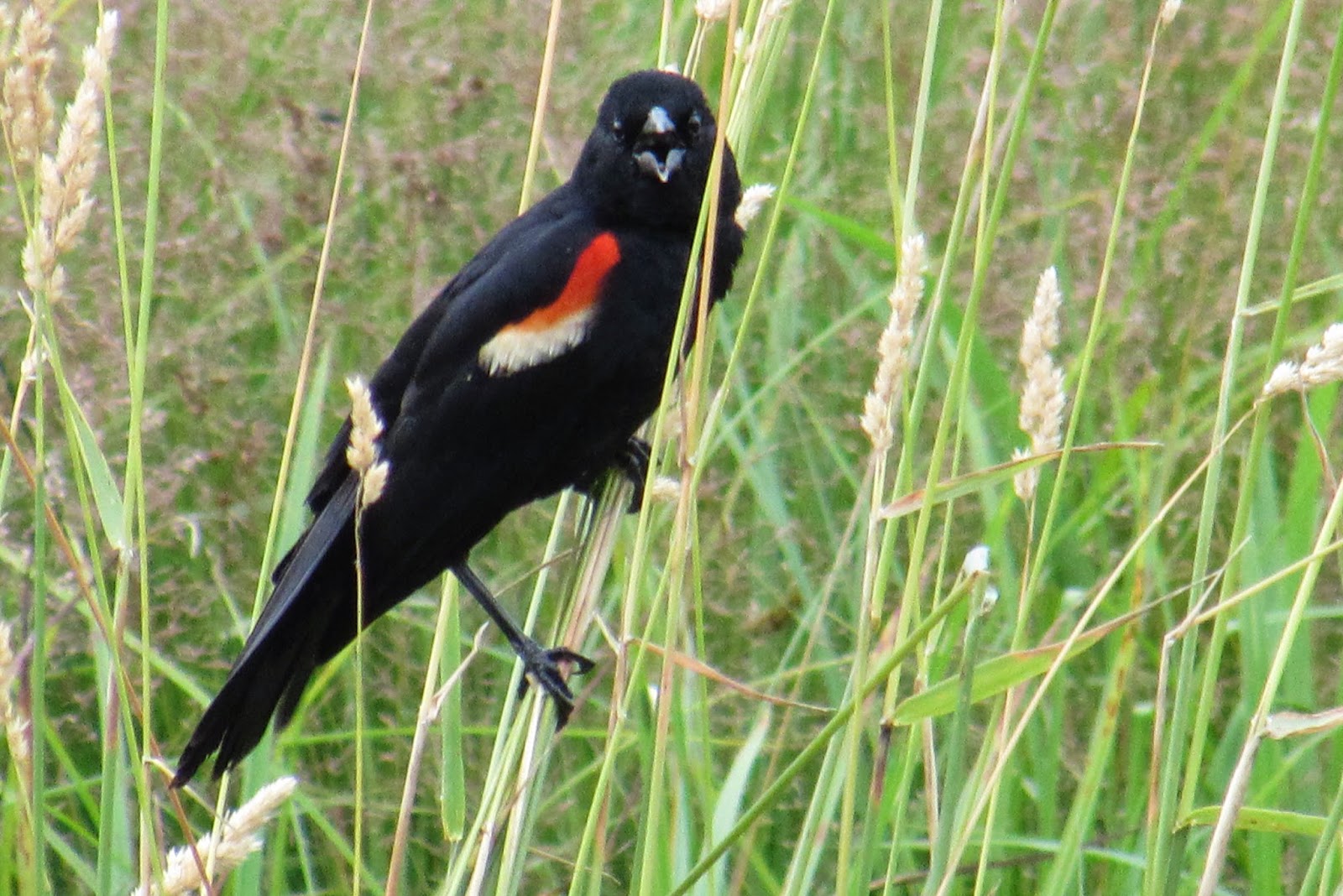 Then there was the usual red-winged blackbird—scolding me for being near their nest. I was about to put my camera back in the truck and go help Hubs pick zucchini when Hubs said, "Stand still and look over there." I followed his finger and saw... 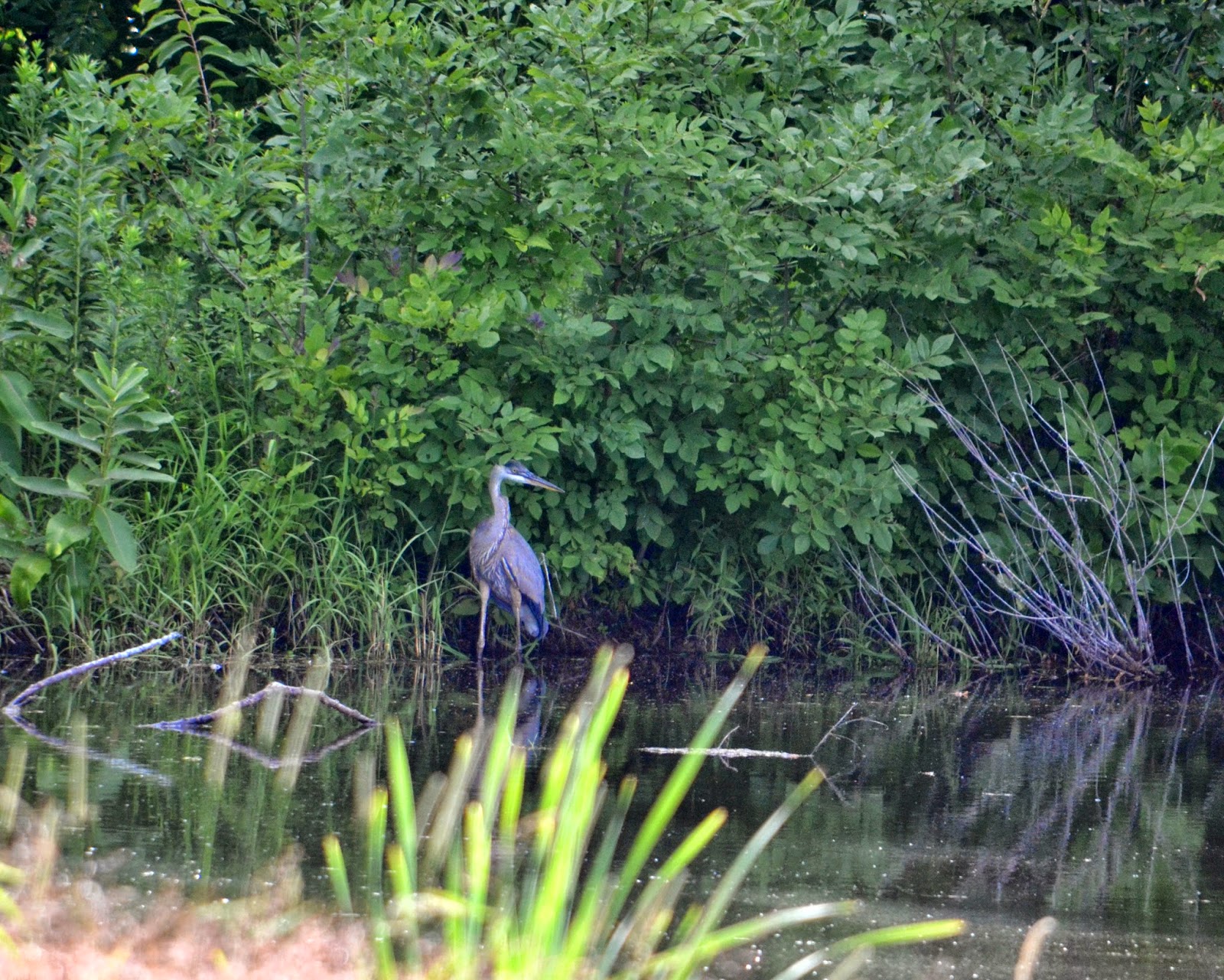 ... Mr. Heron trying to hide on the far side of the pond. Shockingly, he stayed put while I took about 100 really bad shots with my poor excuse for a zoom. After deciding I had enough poor photos, I wandered over to the garden and helped Hubs. 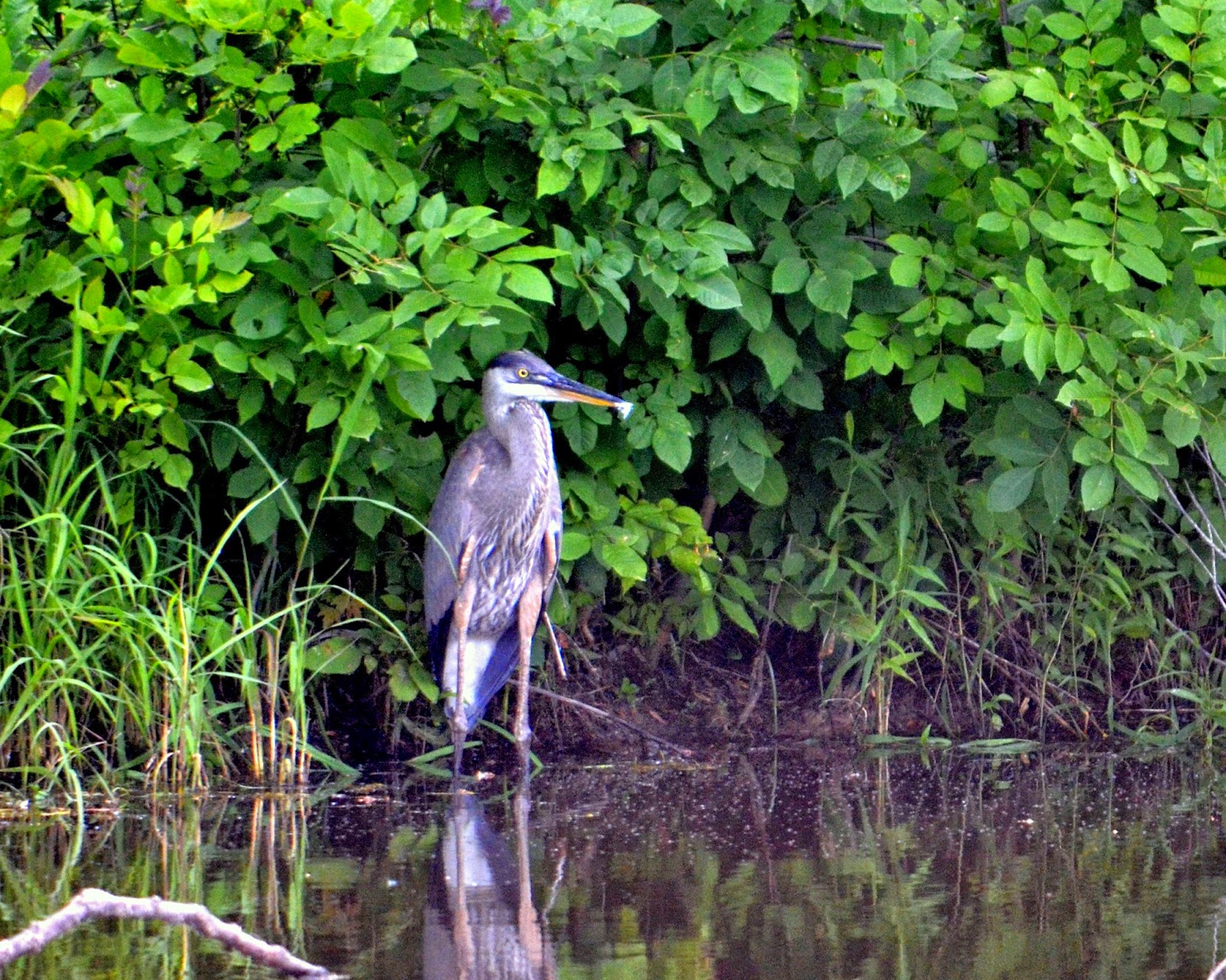 Since Mr. Heron was still there, I decided to try sneaking a little closer. My slow, steady footsteps gave me this shot. I turned my attention to the view of an elderberry bush and the grain bin. I moved the auto setting to landscape and took the shot. Out of the corner of my eye, I saw Mr. Heron taking off. I whipped my camera around and got this... 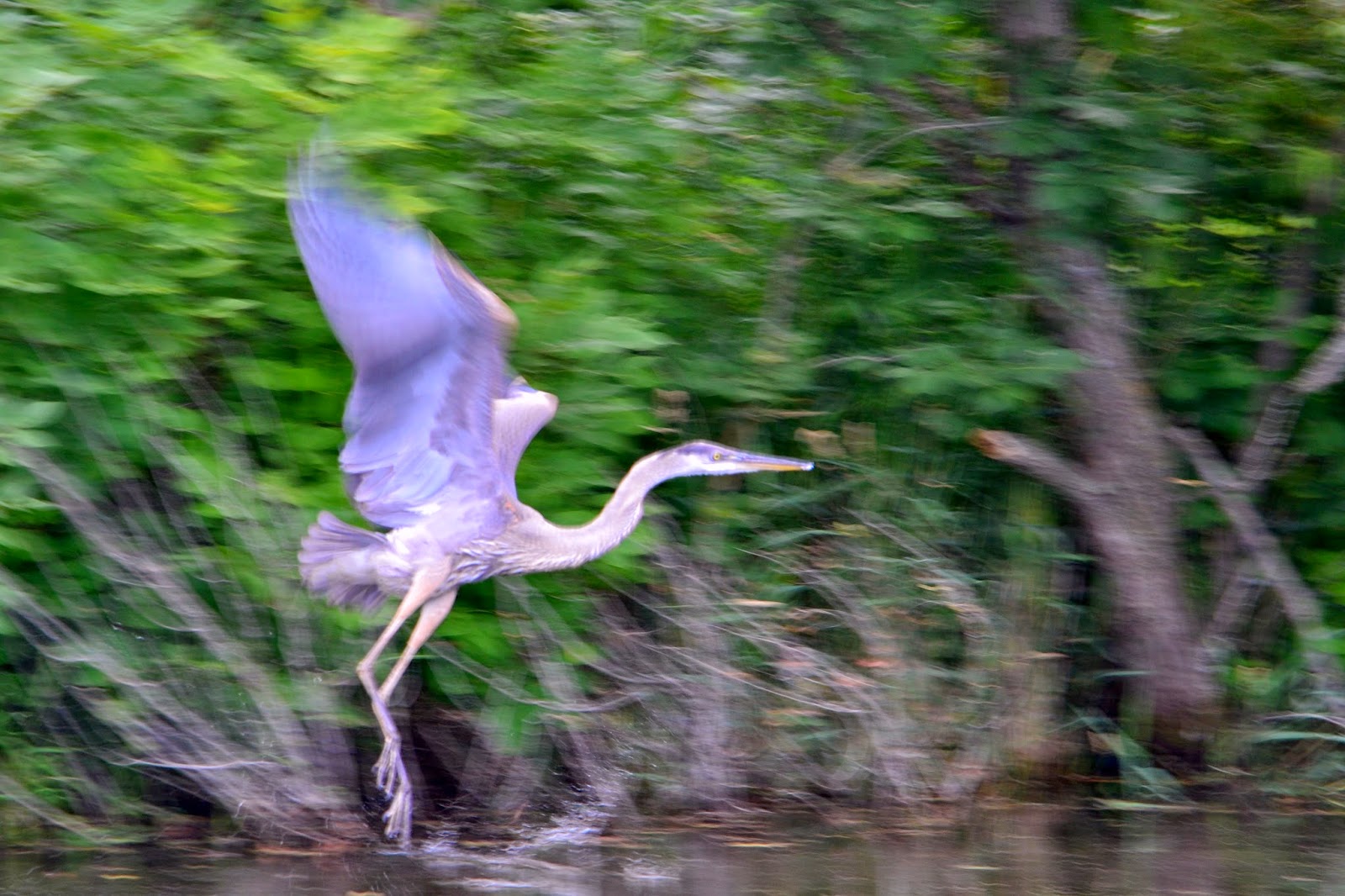 ...a really bad shot of Mr. Heron flying away. I almost wish I had just watched him in real life instead of through the camera.