Finally, a Hawk, I Think

I see quite a few hawks while driving down the Interstate, but rarely when I might be able to get a halfway decent shot.  Friday afternoon was Hubby's follow-up Doctor's appointment and in case you were wondering, he is doing well, almost ready to go back to work. I'm getting sidetracked. What does the doctor's appointment have to do with hawks, well we saw 5 along the interstate. However, there was one on the road leading up to the interstate. He was sitting on an electric wire. Happily, I didn't have to yell, "STOP!"  Hehe, I was driving. Guess what I did?  Yep, locked up the brakes. Hubby who was about to nod off, loudly and not happily, wanted to know what was going on. He quit asking when he saw me grabbing the camera. It isn't the great shot I was shooting for, but you can tell it's a hawk of sorts, I think.  My confusion lies in the lack of tail feathers to shake.  Any ideas out there? Hubby thinks it might be a Goshawk. 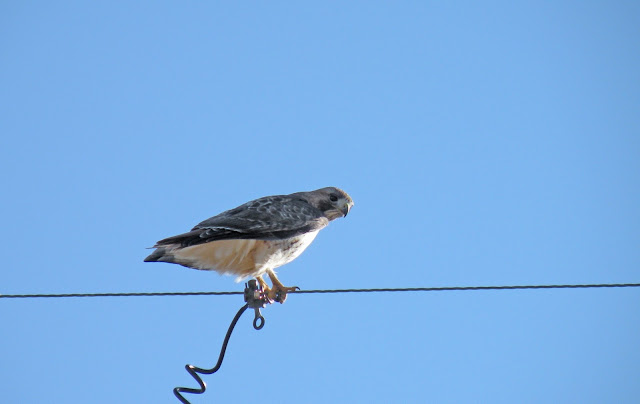 not sure on the breed. definitely missing a tail! wonder if it got away from a predator of sorts?

Definitely a hawk and appears to be missing the tail feathers. Not sure what species. Good eye!

Not a Goshawk Betty but definitely a buteo - Red-shouldered or Red-tailed I think.

Great shot, I wonder what is with the missing tail feathers?

Not sure what flavor it is, but definitely a hawk of sorts seeing that curved beak.

Glad your husband is doing well!

it is a beauty for sure.

Okay, my guess would be a white tailed hawk. If you look closely at the enlarged image, it does have a tail, but the wings are covering it somewhat.

Check out google by typing in White Tailed Hawk Photos and see if any of those images compare to yours.

Let me know what you think.

love it when photo moments like this happen. a hawk indeed. ( :

It's a great shot! I would have slammed on the brakes as well. I hate when hubby drives because he goes too fast and I miss so many things like this. You did great!

I agree, a great shot!

It appears to be very much like a Mississippi Kite, which we have here year round now. However, his chest feathers seem much lighter than a Kite, but he's definitely missing some tail feathers, whatever he is. He's a very handsome fellow!

A nice capture Roan, but a tough ID. I don't think that it is a Northern Goshawk because it doesn't have the distinctive "conspicuous" eyebrow and a juvenile would have much heavier blackish-brown streaks on its flanks. The dark patch below the eye, adjacent to the throat is peculiar also.

I have never seen the Krider's Red-tailed Hawk but it is a "white morph" Red-tail that lives on the Great Plains. Looking in my National Geographic Field Guide to North American Birds, the description and drawing fits this bird well. It has the mottled scapulars (like most Red-tails) and the dark area under the eye. It also has "underparts whiter with thinner and paler brownish streaking" than the common Red-tail. From what I understand, if it is a "Krider's", they are rather rare.

Hawks are notoriously difficult to ID because of their varied plumage but you might want to contact your local Audubon for an ID. If you do, please let me know what you find out!

I am ALWAYS frustrated by hawks flying over. The other day we saw one with a dove in its talons, land on top of a power pole. Just not possible to stop! But, you did great with this picture!